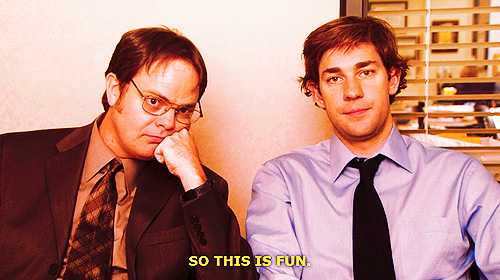 These aren’t in order – it’s just the way I wrote them.

Fucked Up â€“ Queen Of Hearts (‘David Comes To Life’)

I donâ€™t get why people dislike the vocals on Fucked Up. All the best punk bands have a dude that sounds like a bear for a singer: The Bronx (shaved), Paddy from Dillinger Four and obviously Father Damian who is actually a bear (unshaved). Someone said that the video to â€˜Queen Of Heartsâ€™ makes them weep and they would be right. However, despite mentioning the vocals, they arenâ€™t even the best bit of the song â€“ no, the best part is the last minute and a half, which is an absolute barrage of fist-in-the-air, hugging-the-person-next-to-you, explosion of ecstatic punk rock guaranteed to make you emote.

TouchÃ© AmorÃ© are one of the reasons why I still havenâ€™t lost faith in hardcore. Like a savage beating, their second album and in particular, this song â€“ will leave you breathless and wheezing (although, youâ€™ll probably still have all your teeth, phone, wallet etc.) Vocalist Jeremy Bolm has this wonderfully strained and scratched voice of a dude consumed with angst and the tightness of the rest of the band make their taunt, aggressively-melodic music something Iâ€™ve basically been sticking on repeat since I first heard it.

I just wish Matt Berry was talking over this. Or just some samples of him saying â€œkit katâ€ or â€œJEN!â€ or â€œWOW A GUN!â€ or â€œThe Ordinary Boys?â€ â€“ I think having him at the start of their mind-screw-head-shafting-future-music-odyssey has affected me a little. â€˜Lushâ€™ is just one word Iâ€™d use to describe it. â€˜Deliriously ecstaticâ€™ is another. I imagine this is whatâ€™s played in the Soylent Green factories just as your exit, before Charlton Heston ruins everything as usual.

Wesâ€™s guitar solo = more golden than the snake on the album cover, foâ€™ sure.

If the bending, sonic noise of this track doesnâ€™t get to you, then thereâ€™s a chance youâ€™re possibly dead. â€˜Gang (Starting Never Stopping)â€™ is the second track from â€˜Gangsâ€™, their second full-length. A choppy, tribal mash-up of aggressive sound, with elements of punk seeping through the unhinged, cracking chaos â€“ it makes me want to punch out the sun.

The Wonder Years â€“ Came Out Swinging (‘Suburbia: I’ve Given You All And Now I’m Nothing’)

This was going to be â€˜Woke Up Olderâ€™, but after some truly amazing news, â€˜Came Out Swingingâ€™ pips it, mostly for lyrical content â€“ because you know, itâ€™s about moving on, becoming a better person, and I wrote something about getting better about a month ago, and if Iâ€™m being honestâ€¦Iâ€™m getting there. (Thanks, The Wonder Years).

Kings of concept-core, Down I Go make metal music that is pretty specialist. â€˜Poseidonâ€™ is a bending caterwaul of god-worshipping terror. Thereâ€™s far too much going on here; from ridiculous back-and-forth gang vocals, electronic crackles, howling guitars and even a bloody saxophone. Being unhinged never sounded so good.

Not actually sure why I like this. In my review for planet-loud I proclaimed it the best song Iâ€™d heard all year â€“ this was back in May. Iâ€™m actually listening to it again now, all 9 minutes and 2 seconds of this bastard. As a whole, â€˜Escape Velocityâ€™ works best, but â€˜DE3â€™ is still a superb mind-warp of space-rock genius.

Black Spiders â€“ What Goodâ€™s A Rock Without A Roll? (‘Sons Of The North’)

Five proper lads, with proper haircuts, playing proper tunes. Actually, they all look like various ex-Motley Crue roadies who havenâ€™t had a wash in 15 years. This is the best song from the under-rated and over-looked, â€˜Sons Of The Northâ€™ â€“ if youâ€™re after music that sounds like itâ€™s still hungover from a whisky drinking competition, whilst listening to Fu Manchu, then this is for you. Eat thunder, shit lightning indeed.

Miserable sounding, gutter-punk done by a man consumed by loss despair. Gared Oâ€™Donnell does his best to be as morose as possible on this stabbing, part-Therapy? Part-Hot Water Music diatribe. Thereâ€™s something about a voice thatâ€™s been completely weathered away that really makes music seem incredibly unsettling. In fact, the whole of â€˜Year Oneâ€™ by Hawks And Doves is worth your attention.

I STOPPED TRYING TO BE COOL A LONG TIME AGO

Scathing, caustic rock â€˜n roll fed through a bastard filter. Frontman Steve Austin (not that one) sounds like a complete manic, barking his screechy voice over dense, razor-sharp metal for about 2 and a half minutes. Itâ€™s really, ridiculously loud for some reason, not Coachwhips loud, but getting there.

The Heat Tape – ‘Quotes From An Unopened Letter’, Set Your Goals – ‘The Last American Virgin’, Despise You – ‘Fear’s Song’, Absolute Power – ‘Secrets’, Four Year Strong – ‘Stuck In The Middle’, Goes Cube – ‘The Ban Has Been Lifted’, Wolves Like Us – ‘Shiver In The Heat’, Obits – ‘Naked To The World’, We Are The Ocean – ‘Overtime Is A Crime’, La Dispute – ‘The Most Beautiful Bitter Fruit’, Of Legends – ‘Save The Humans’, Red Fang – ‘Hank Is Dead’.

Click HERE for a Spotify playlist featuring all the above songs, AND MORE