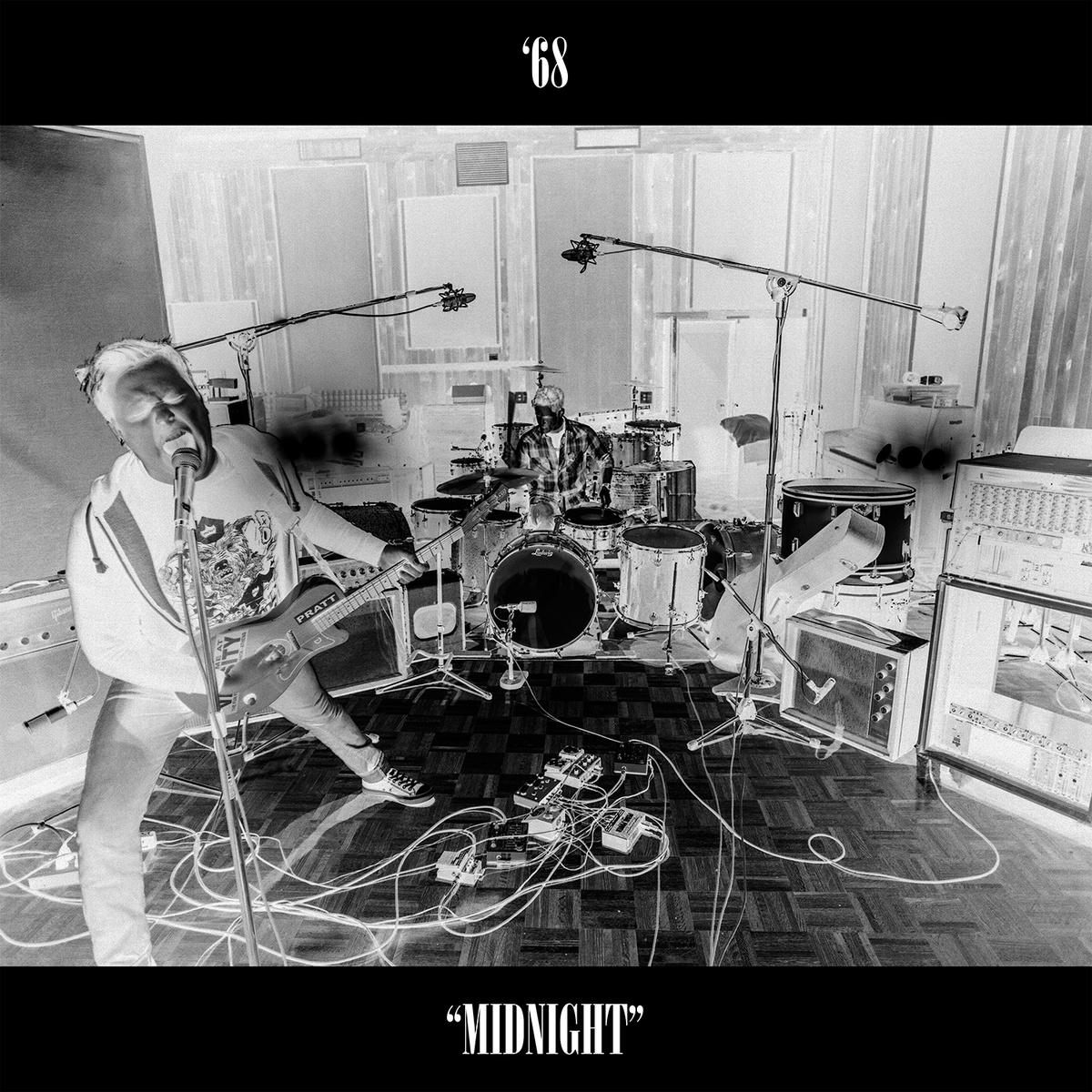 – Midnight
Label – No Sleep Records
Released – 1 April 2014
Sounds like – circular shaped objects; being a fan of these, rock and or roll, Bleach.

I was gutted when The Chariot hung up their instruments at the end of last year. Their final album, One Wing was number 3 in my best of 2012 list, thanks to the barking-mad, experimental and mesmeric assault it delivered. I still stand by my point, that even if you don’t like metal, you’ll find something to love on that album and I defy anyone to not find First utterly brilliant and heart-racing. Anyway, there is some good news to come from this – brainchild, frontman and only original member of the Douglasville party smashers; Josh Scogin, has formed another musical outlet: ‘68.

Taking their name from a ’68 Camaro that Scogin’s father once owned, ’68, are a somewhat departure from The Chariot’s math-rock, spasmodic shape-throwing contortions. Don’t think though for one minute that ’68 are at the opposite end of the spectrum – the raw, jagged bruised scrape is ever present, yet in a more stripped down, ramshackle form.

think Jon Spencer at his most cathartic and shambolic, playing the wrong chords, possibly in the right order and you’ve got some idea of what ’68 sound like..

Okay, so The Chariot were a bit all over the place, in a ‘throwing themselves off speaker stacks kind of way’ but for the most part, all their instruments were mostly in tune, right? Possibly? Not sure. ’68 make noise that sounds even lower, twisted and a lot more menacing and is somewhat of a nod to Nirvana’s Bleach in places (not just because of the EP cover). Scogin’s guitar is a caterwaul of mutilated chords and see-sawing, aggressive droning feedback, backed by his vibrant vocal yowls. Drummer Michael McClellan is equally discordant; his drum fills are bludgeoning, layered beat-downs that never follow a clear structure or pathway, but yet tie everything together. First track Three Is A Crowd is a jagged, stop-start riffage see-saw, of mangled guitar shrieks, deep baritone warbles and huge, cymbal crashes. Underneath this is an eerie brass-track, that could just be Scogin’s guitar, which is being well and truly punished. Second track Third Time Is A Charm is even heavier – a low, barbed concentrated attack, with a muted, squealing mid-section of “whoooaaaahhhooooohhhsss” with the final section giving a nod to Scogin’s previous outfit in terms of chaotic-heaviness and a deliriously crushing lead riff that is oddly captivating, if incredibly ugly at the same time.

This might sound like a lot of noise, which I suppose, it essentially is, but there’s a strong blues-rock vibe bashing its way through – think Jon Spencer at his most cathartic and shambolic, playing the wrong chords, possibly in the right order and you’ve got some idea of what ’68 sound like. Here’s hoping Scogin and McClellan can create something truly special out of this experimental trash-rock, as Midnight is a strong, explosive starting point. Fans of noise-rockers METZ, the aforementioned Blues Explosion and The Black Keys will find a lot to like/smash to pieces when listening to ’68.

Buy Midnight from No Sleep Records.