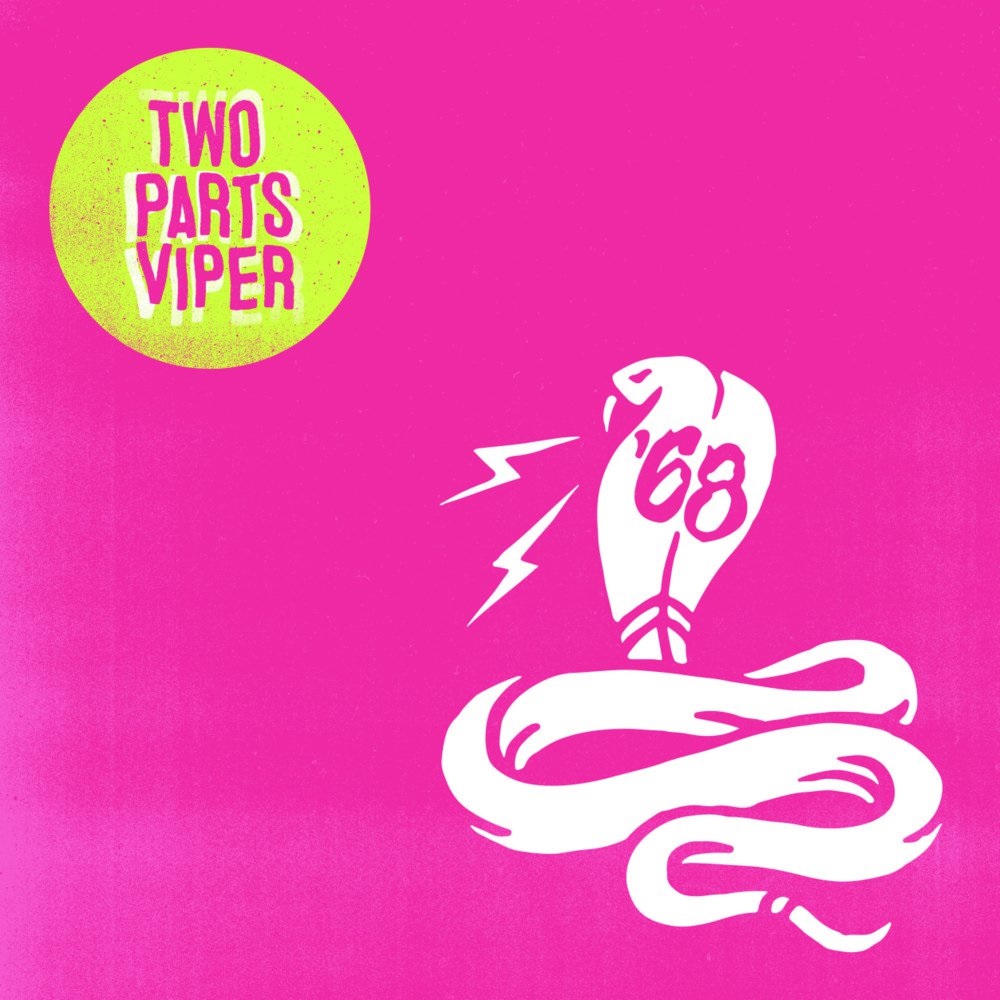 “I could have been anyone from anywhere, but I chose to be me, right here.”

When a man in a suit approaches you in a dream and tells you that you will fail if he (the man) isn’t two parts viper, then I guess that’s a sign, right? That’s what Josh Scogin, vocalist and guitarist for improv-noise bastards ’68 states in this interview with Currently Streaming. Best cut down on the Twin Peaks marathons. This is what you would expect though from a band like ’68 – there’s always been a surrealist, magical element to them (their first EP Midnight, for example) driven by Scogin’s chaotic lust for life. Two Parts Viper might have taken longer to record than the haphazard “day or so” recording of their acerbic debut, In Humor and Sadness (and have actual song titles this time) – but it’s lost none of the fire and whilst there’s not the sound of an amp blowing up, there’s plenty of guitar-swinging, drum-smashing bedlam on offer.

The rhythmic percussion on opening track Eventually We All Win was apparently made up by Scogin tapping his ring on a coffee cup. Boom, he’s written half a song and he’s not even trying. Scogin sounds sorrowful as he croons the words “hold you breathe and dance with me…” as a dirty and savage riff bursts forth, with squealing, teeth-rattling urgency. This strangled and splintering energy staggers, lurches and rolls over the brief two minute surge of writhing power, closing with the scream of: “AND IF YOU HERE MY NAAAAAMMMMEEEE IT WILL BE TOO LATE!”

Just like In Humor and Sadness, Two Parts Viper is an album that obviously works best in a live environment and nothing else expresses this more than the blues-punk wail of Whether Terrified or Unafraid – packed with John Reis-style whoops and woos, a snarling, lip-curling guitar tone and that stalking, hostile stop-start noise-rock wail. It’s best exemplified by the raucous gang vocals of “I could have been anyone from anywhere, but I chose to be me, right here” which is so typically Scogin and the kind of anthemic chant you can image a huge, sweaty crowd of check-shirt wearers roaring back to the frontman who has just thrown his guitar into the ceiling.

“Here we go, I’ve got nothing but love for ya” raps Scogin on the lurching southern-rock swagger of This Life Is Old, New, Borrowed and Blue – a ramshackle spin of turbulent noise, laced with headstrong, sharp, jagged riffs that hack and jab into McClellan’s scattered, lopsided percussion. The balance of abrasive, tearing bursts of punk rock and this slick, ostentatious groove carries a huge chunk of melody and self-confidence with it.

One of the most interesting tracks on Two Parts Viper, (which is difficult, as all of the tracks on offer here have something unique; something that makes you sit up and want to analyse over and over) is the minimalist scratch of  the grunge-rock No Apologies – led predominantly by Scogin’s whisky-ravaged voice and a slow, stuttering guitar plucking, with McClellan providing staggered percussion where it suits. It becomes a spoken word piece, aka, similar to Listener, (Remember David De La Hoz?) )at the halfway point; with Scogin almost self-referencing the band (“a whole lot of feedback can really help distort all the pain…“) as the sudden blasts of crunching and heavy distortion rain down in-between.

Things continue to evolve and change though with ’68’s sound; take the melodic and angst-ridden Mineral-rock of The Workers Are Few – which feels a lot more sombre than the other tracks on offer; but it also feels fuller, if that makes sense – there’s no real space left open, no coughs, grunts, screams; that dead space is filled by this eerie wash of keys, echoing backing vocals and swirling levels of fuzzy distortion. Things again begin to swing towards the weird and wonderful through the see-sawing, industrial glitch-rock of Life Has Its Design – led by McClellan’s sporadic and spacious drumming and various sounds and noises that sound like a load of circuit-bent ray guns all firing at once through some pick-ups. Scogin croons with a melancholy wail, bringing to mind moments of a certain Seattle band’s frontman pushing his voice to the limit. The huge crushing riffs and hammering drumbeats that make up the melancholy and sorrowful Death Is A Lottery almost bury Scogin’s morose and fractured vocal rasp, as once again, any space that ’68 so often utilise, is blocked with this squealing discordance. I’m really hoping that the lyrics “maybe I’m right, maybe I’m wrong” are a reference to the first song I heard by them, Three Is A  Crowd.

It’s the final track, What More Can I Say, which stands apart from everything else on Two Parts Viper and is utterly beautiful and wracked with emotional intensity. The tripping, record-scratching rotation of brooding chords, Scogin’s rambling, outpouring of emotional prose, which folds over itself in a wave of wrought angst, love and need for companionship, is best summed up with his words:

“we can love each other, we can grab each other’s hands,

Because we have songs that need to be sung…

“We have fights that need to be fought…”

Two Parts Viper progresses from their debut; expanding on Scogin and McClellan’s ability and coherence as a formidable and chaotic duo that a lot of bands will be wondering “how the hell can I sound like that?” You can’t, because ’68 have the blueprints and even thought they’re showing you various designs, they’ve been scribbled over, re-worked and re-imagined into a new and surprising form that is beyond comprehension by anyone but them. A vital and engaging eruption of raw and rampant energy.