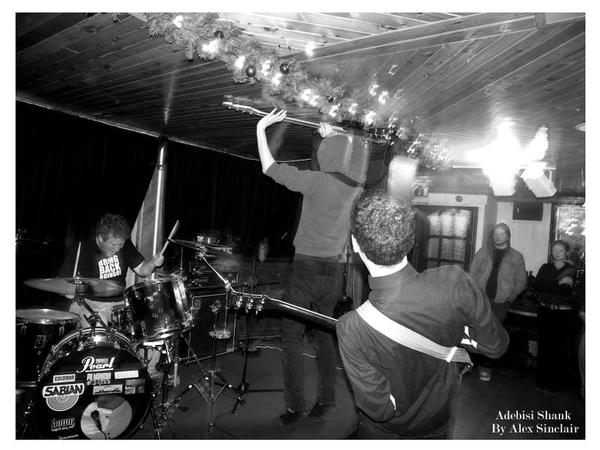 This is a review of the EP of a band called Adebisi Shank.

I nearly left this review as that single sentence above, (after this review, you’ll probably wish I had) but I thought against it, as:

a) Not many people would get the joke.
b) It’s not really a review is it? It’s just me being pretentious.
c) I’d already made said joke in a live review of the band’s set a few days ago.

Trying to describe a band like Adebisi Shank is a bit like trying to teach a cat how to play snooker. Pretty impossible; but with the right perseverance you’ll probably reach the ‘holding the cue stage’ until you finally crack and end up trying to stuff the unfortunate creature into one of the pockets.

There are so many things I want to say about this EP, but the real trouble is actually getting the words out. My fear is that this review will turn into a half-arsed meandering ramble about the 4 tracks on offer and really not do the band, or their music, justice. First impressions are as follows. It reminds me of Oxes – this is a very good thing. Ok, so both bands are devoid of vocals, but it’s not that which makes them similar. It’s the outrageously nonsensical range of bizarre sounds and huge riffage that brings to mind comparisons to the Baltimore trio. Also, Battles seem to be an obvious influence, particularly on ‘You Shouldn’t Be In White‘ which sounds like it should be sound tracking some horrific inter-stellar spaceship battle scene. Yes, we have reached critical mass with the amount of effects pedals this band use, hurrah!

‘Horse‘ opens proceedings with a cacophony of guttural and slightly meandering bass that seems to explode in all different directions like a bearing in a pinball machine. The guitar work at the 1.39 mark is truly remarkable, interspersing wild glitch-filled squeals and erratic twists and quirks. It all climaxes in the last 35 seconds in an incredible rush of speaker-shredding riffs and monstrous noise-rock fury.

The steady drum into of ‘Jump Cut’ relaxes the listener after the pounding delivered by the heavy-weight ‘Horse.’ This second track sees Adebisi Shank mellow their sound, taking it into a more dream-like status, but still retaining their underlying sharpness and their ability to generally ‘fuck up’ what you feel music should sound like.

As previously stated, ‘You Shouldn’t Be In White‘ has “spaceship disaster movie” tag written all over it and very little else needs to be said on the matter, apart from the fact it’s one intense, mind-bending 4 minutes of swirling aural ecstasy; sounds merge into one before being fired out the other end like fragmentation grenade.

The last track, ‘Caddyshank‘ is perhaps the heaviest of these 4 songs, bludgeoning the listeners’ ears with its opening salvo of noise-fuelled vigor. It then continues to sound like nothing else I’ve heard before, as the over-indulgence on effects pedals leaves my mind a withered husk, before striking with and incredible post-rock-esque build up, that gradually falls and then fading out in a squeal of reverb and electronics. The end.

The EP can be purchased via paypal from the band’s myspace. It is also available for streaming purposes from their last.fm page.