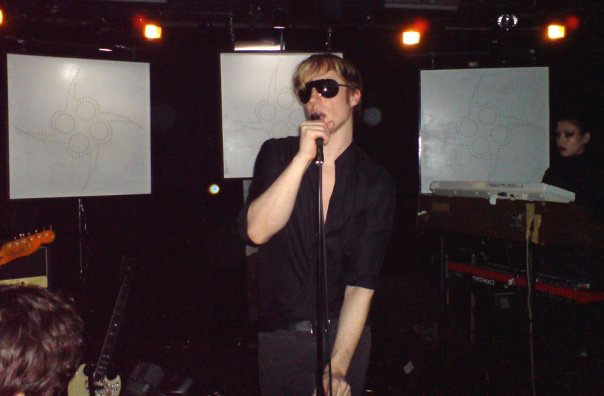 –
Now that Alec Empire seems to have gone all ‘Vice magazine’ electronica on us, has he put his days (or ‘Nights of Violence’) behind him? Well, no not really. He’s still just as abrasive and caustic as before, albeit in a different format and style. Want to know more? Read on… Obviously the success of “we’re a joke band, lol!” (Test Icicles) and the glowstick appreciation society (Klaxons) has had an effect on the first support band of tonight. Mixing standard indie-rock with a keyboard backing is hardly original at the moment – at least they didn’t have the same ‘um-tss um-tss’ drumbeats that seems to be associated with every-fucking-electronic/rock crossover band ever. Still, the drummer did well trying to hold his microphone, sing and play at the same time, whilst the 16 year old-looking guitarist and bassist spent most of their time with their backs to the audience, looking at the floor and generally making me feel incredibly irritated.

After some confusion (“OMG, ALEC EMPIRE IS ABOUT TO START!!!“) everyone that has working ears is left really fucking disappointed. Now – noise music is a tricky one to actually appreciate. Okay, I get certain amounts (Lightning Bolt, some Wolf Eyes, SunnO))) some other stuff) but really, bands that think they can peddle the kind of crap the second support act strained out, should be blasted into the sun. Four guys just standing about creating incredibly dull drone for about 30 minutes makes me want to walk into traffic. ‘You’re shit’ someone shouts during a quiet period – got it in one, sunshine.

Anyone with preconceptions that Alec Empire has lost his edge should be taken outside and given a swift hiding with a keyboard. Okay, so he may not look/act like the noise terrorist he used to be. (According to reports of his Reading Festival performance in 2002, he was asked to cut his set short after nearly destroying the speaker system, but carried on regardless) – Instead, he has the air of a sophisticated and elegant frontman that smacks of both pretension and authority. It takes a while for things to really kick off however; the new songs are warmly received “New Man’ in particular begins the first phases of a mass dance-off and many attempts not to crush the fearless photographers perched on the edge of the stage. other notable highlights from his new album include the punk-electro-lite ‘Down Satan Down’ and the sombre sounding ‘On Fire’. As the first notes of “The Ride‘ kick in, it’s like an electrical current has been passed through the floor. “Addicted to You‘ follows, heralding the biggest crowd sing-a-long of the night and a crush-potential of 9. Oh but it gets better. As “Kiss of Death’ bludgeons the eardrums, I’m exposed to what Digital Hardcore is all about. For the rest of the song, many others and I are used as human pinballs, bouncing from person to person in some nightmarish arcade, backed by the loudest electronic-thrash punk ever.

In some places, his withering German drawl is lost in the wave of dischordant sounds from Nic Endo’s keyboard and the razor-sharp guitar riffs, but this is made up by the blast-beat drumming and cavalier attitude that Mr Empire exhibits. Even though I don’t mind fake encores, perhaps the decision to leave and then come back on again just to play ‘1000 Eyes’ proved a big anti-climax. Anyone hoping for a rousing rendition of ‘Everything Starts With A Fuck‘ or the breakc0re-noise of ‘Gotta Get Out‘ was left dissapointed. Still, a strong performance from a musician who isn’t afraid to diversify his sound and still be incredible.