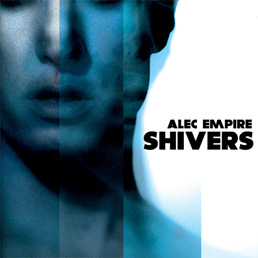 As Alec Empires infamous ‘the past, the present, the future’ tour creeps closer into our ‘awesome, radical’ gig calendar, keep it fast would love to give the grand news that the forthcoming record ‘Shivers‘ will be released on May 8th.

The track titles for this 7 track mini album (estimated playing time over 30min Alec has added) are:

If You Live Or Die (2009 version feat. Robbie Furze/Big Pink on guitars)

Note: iTunes will have a full concert as a bonus available. (more infos soon)

The first dark, controlled, electronic riot track ‘Control Drug’ can be played from the player below:

You can also watch a 5 minute taster how the track ‘Shivers‘ will sound from the player below:

.
Last but not least if you are one of those Nic Endo fans who is still bidding on that poster of her and haven’t even looked up when Alec and Nic are playing, the dates are below:

If you can I would go for the London gig as that evening will be 10 years to that day since the Atari Teenage Riot was in a huge Berlin Riot!