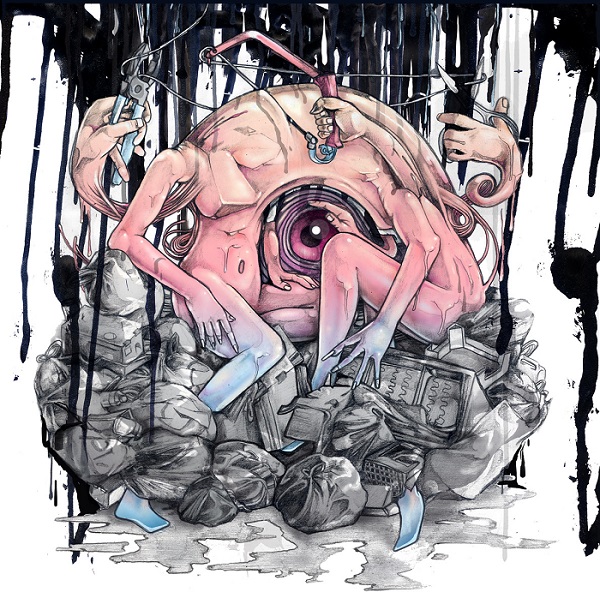 Hailing from Derby, Alright The Captain  are plain oddballs. Just look at the brilliantly warped album cover that looks like the result of two shapely models, some DIY tools and one of the psychopathic cores from the computer game Portal emerging from Seth Brundle’s transporter pods. An unholy amalgamation of machine, flesh and pliers. It’s disgusting and you won’t be able to look away. Instrumental rock has made some incredible leaps forward – the likes of Adebisi Shank (RIP) were revolutionaries when it came to sacrificing vocals and instead, shaping mind-bending soundscapes. And So I Watch You From Afar’s early work (see S/T, Letters and Gangs) was a hefty weight of crunching guitar-shredding power that was so intricate, so well crafted you didn’t even realise that the majority of their work was completely devoid of words – you were too busy head-banging like a bastard. Alright The Captain fall more on the side of the power-trio of Adebisi Shank – albeit, with some very different and dare I say, even quirkier mannerisms and styles.

There are sudden pattern shifts, time changes and deviations from the norm that make Contact Fix an exciting and fascinating listening experience. For example, opening track Toaster Mouse is built around a steady, squelching synth-bass line that rises and falls with giddy abandon, whilst the tappy-math rock guitar weaves trickery and pitch-shifting bite throughout, like a snake that’s risen from a basket, waiting to strike. When ATC kick into gear, their post-punk rip is a crusty and aggressive barrage, bringing to mind OXES on some mad power-trip of ecstatic bliss. The “fucking freezing” guitar-twiddling shred of Baltrific could have quite easily fallen off a deeply perverse and ominous film-score, such is the notion of engulfing trepidation it creates, thanks to the dark synth-passages that ring out a little too long to be completely wholesome, sounding almost eerily hypnotic over the tribal drum patterns.

Expansive electronic-passages encompass the brooding shift that is HBT – a bending surge of tripping space-rock. This uncoiling spread of bass-heavy terror, is backed by off-kilter percussion, ghostly chimes and a muffled, barely audible voice that splutters through this complex mind-melt of sound. The ambient and mesmeric Eagle Hands is less fear-inducing, but still coughs up a stuttering barrage of grinding-post-rock, whilst Ben & Barbara is built around complex math-rock time signatures, heavy synthesised waves of crushing keys and feels like a lost Adebisi Shank track slowing breaking apart as it breaches the earth’s atmosphere. “Ben…I want you to know…I am happy here…” intones a familiar voice that sounds like it’s swallowed a load of static and is soon met by a riotous barrage of bone-snapping riffs and drumming, not to mention a howling, other-worldly shriek of terror and rasping pain.

Things take a turn for the even creepier on the erratic purge of I’m Not Smart, I Don’t Have All That Book Learning Stuff which is most definitely watching you while you sleep and the malevolent and dark corridor it backs you into with it’s bending, unholy snarl is somewhat captivating – the last minute in particular feels like 65daysofstatic-levels of chaotic euphoria. Closing track, the amusingly titled French for Gnome, proudly embraces weirdsville. Bringing the riffs in truckloads, it also splices in glitching electronic breakdowns, haphazard, scribbled vocal-bleats and an absolutely crushing coda of splintering and warped post-rock debauchery.

Clocking in at around 29 minutes, Contact Fix is a short, but vibrant and experimental adventure of genre-bending creativity. Alright The Captain blend dream-like electronica hell with math-punk and post-rock beautifully, to create a swelling, musical chimera – stunning.

Alright The Captain
Mountains of Records