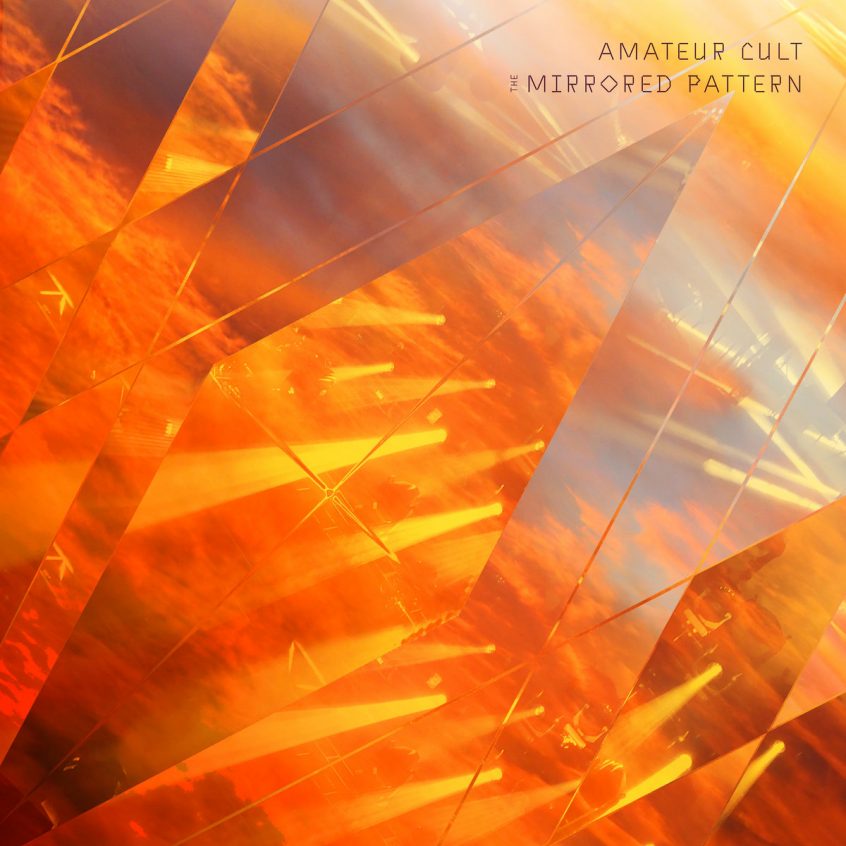 I have very much enjoyed the music of Alastair Chivers – his previous projects, the nu-wave pop of DTHPDL and the darkwave noise of False Bliss have both been covered on this very website, so I was intrigued about this new musical journey in the form of Amateur Cult and to see where it would take me.

Written in isolation during the lockdown of 2020-2021, Chivers states how The Mirrored Pattern was written as “an exploration of the strange and misleading realities we live in through our phones, bank accounts, our beliefs, relationships and perceptions we have manufactured for us through social, mass and political media.”

“Your hope is the candle/a light cradled and clear” sings Chivers on the warm-synth overload of You Be You, bringing to mind the possible fragility of hope and how it needs protecting, support, and shelter from anything that could disrupt or damage it. Credit to the trumpet on this that comes kind of out of nowhere but adds this elevation and a real boost to the vibrant desire that this track strives towards.

The brooding darkness of The Ritual will possibly set you on edge – haunting is perhaps the best way to describe it, from the opening synthesized drum beats, it launches headfirst into this industrial stomp of squashy synths, ghostly whispers, eerie chimes, and breathless vocals. There’s a real sense of menace on this, from the way it builds through this, I guess, ritualistic chanting, layered distortion, and intensity, it could soundtrack the trailer to a horror film set in the woods perfectly.

The beginning of Ashes reminds me of the morose synths that featured on the soundtrack to the bizarre suspense puzzle game, Pony Island, and with the introduction of rapper MC TH!NK, what comes to mind is the genius of dälek – darkwave, underground hip-hop that tears and rips into the consumerism culture and mass-marketing world we struggle to live in – easily one of the best tracks on The Mirrored Pattern and should be grounds for more collaborations between TH!NK and Chivers due to both complementing each other’s sound.

Hipporealism is 5 minutes of tripping, soft-synth noise that has an altogether calming, meditative effect straight after the abrasive nature of Ashes; it’s moody and imposing, but in a different way, with no aggression, just subtle, tinkling piano vibes, light percussion and drawn out meandering moments of solitude and I suppose, isolation. Fire and Full sounds like someone re-tuning a Nine Inch Nails track from The Fragile, it sounds like it’s close to falling apart; vocals splinter and crackle under the tripping instrumentation, and it feels almost like a dream, as though Chivers is calling to you from another dimension or existence.

I love what’s been done with Sigh With The Sea – the opening chanting, reminiscent of a pagan choir, featuring the repeated mantra “we bury what we find” which is oddly chilling, backed by almost no instrumentation, save for a solemn, tribal drumbeat. My first thoughts is the Wicker Man, and how you know you’re never getting off this island, no chance. The last minute or so builds in trepidation, this absorbing, amorphous blob of shimmering sound.

The brilliantly named Final Battle With The Boss is a nod back to computer games as mentioned before, the electronic, 80s-style chiptune-esque noises, laser sounds, squelching synths, and ambient dread all remind me of something from R-Type or Repton 2.

The final track, The Mirrored Pattern, sees Chivers return to the microphone after being absent for several tracks, to lay down some more of his warm, enriching vocals over a beautifully, retro-inspired composition with some wonderfully off-kilter piano notes in the closing moments, as everything starts to decay and within the Amateur Cult sound.

The Mirrored Pattern is a bold and thoughtful record – it strives to be something quite alien in its execution; the changes between industrial, hip-hop, through electronica, video game music, and ambient noise have real gravitas and it showcases the power and creativity of Alastair Chivers and Amateur Cult as a force to be reckoned with.

Listen/pre-order/download The Mirrored Pattern by Amateur Cult from Bandcamp below and let it enfold you.