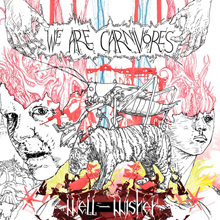 This should be a laugh. In a repeat ofÃ‚Â a previousÃ‚Â article, written back in November last year, last seen here; I decided to brave the Stereophonics-drenched wasteland of the music bargain section of Amazon.co.uk. Yes, sometimes it is really that bad, just selecting ‘bargains, hard rock and metal, followed by price from lowest to highest‘ is going to turn up some right steaming turds in the form of plastic discs featuring the dire output of several artists/bands no-one gives a flyingÃ‚Â swine carcass about. Trawling through the 1p battlefield and every other album will beÃ‚Â  ‘You Gotta Go There To Come Back‘Ã‚Â  or ‘Just Enough Education To Perform‘ by the aforementioned frog-throated barrel of motherfuck known as Kelly Jones and Co. Still, I managed to find 3 albums that looked worthy enough. Each was chosen via a variety of contributing factors:

We Are Carnivores – Brilliant name – that is all.
Sugar Ray – They appear to be having a ‘who’s the biggest twatbag’ competition on the album cover. Nuff said -Ã‚Â *Add to basket*
Time In Malta – My boss hails from these shores and it just seemed apt really. Band – We Are Carnivores
Album – Well Wisher
Release date – Feb 2007
Price – Ã‚Â£1.61
Notes – The jolt to the back of the head created by We Are Carnivores on second track ‘Dead Trustâ€™ breaks me out of the sombre daze that opening intro of ‘-‘ caused me to sink into. Itâ€™s a jerking, vitriol of post-hardcore that rises and falls with the same disjointed bounce of Hot Snakes and I guess a touch of Nation of Ulysses. Iâ€™m particularly drawn to the vocals, which are a somewhat throaty, strangled bark of resent and gurgling rage. What I admire is the course, spikiness this mini-album has; it feels like the bastard offspring of a porcupine and a cheese grater, with haggard vocals that have been and ravaged by cigarette smoke, whisky and shouting. ‘Well-wisherâ€™ has that uneasy, demented quality to it, like sharing your house with a person who has all the tendencies of being a serial killer, but you donâ€™t dare ask for fear of being dissolved in the bath hours later. Thereâ€™s a touch of that stark, desolate sound that Steve Albini-bands radiate on this, which I feel adds to the snarling, guttural punk of tracks like ‘Beckon the Tidesâ€™ and ‘Hourglass.â€™

Verdict/worth the price? â€â€œ Most definitely. We Are Carnivores live up their namesake on this snarling, flesh-tearing 7 tracker. A razor-sharp, Dischord-worthy collection of noise and disturbing riffage. Notes – Ah, 1997… A happier time, when bands looked totally ridiculous and could peddle out any kind of baggy-short, shit-metal riffs and scandalous rapping and get away with it. ‘Floored‘ by Sugar Ray is so all over the place, like someone barfing on a waltzer. Some moments sound like Guttermouth covering Limp Bizkit songs, whilst the supposed ‘serious’ tracks are completely laughable attempts and summer-lite frat-boy rap-rock clichÃƒÂ©s.
Iâ€™m reliably informed by wiki that ‘Flyâ€™ is their ‘hitâ€™ song and I can tell from this near 5 minute assault on my eardrums how Crazy Town were formed. Sweet zombie Jesus. Still, it is better than Shifty Shitshockâ€™s band of incorrigible muppets. Itâ€™s actually the punk rock/speed metal mash-ups that work the best however, and save ‘Flooredâ€™, especially ‘Speed Home Californiaâ€™ and the stupid ‘Cashâ€™ which sounds like a rejected Suicide Machines track. The ‘Stand and Deliverâ€™ cover is truly something else though, whilst retaining elements faithful to the original, but with a similarly camp vocal lead (actually when vocalist Mark McGrath puts the effort in, his voice borders on decent) and some cheap synth bleeps and a strong rock lead it does the job. Probably the best 1p Iâ€™ve ever spent on an album since Fieldyâ€™s Dreams.

Verdict/worth the price? â€â€œ shit yeah. From an incredibly shaky start, I actually grew to liking this far too much, which worries me quite frankly. I think Iâ€™m regressing musically at the moment. They did manage to put 2 versions of ‘Flyâ€™ on here though. WHAT THE FUCK SUGAR RAY??? WHAT THE FUCK. Album – Alone With The Alone
Release date – 2004
Price – 43p
Notes – Theyâ€™re on Equal Vision records, so I kind of know what to expect, but Time In Malta could prove to be a surprise. Iâ€™ve only really heard their cover of Guns ‘N Roses’ ‘November Rain.â€™ ‘Alone With The Aloneâ€™ starts of strongly with the melodic hardcore battery of ‘Bare Witnessâ€™ in itâ€™s shout-sung vocal delivery, huge riffs and solid rhythm section and twisting, yet heavy delivery. ‘Tightropeâ€™ follows a similar path, but itâ€™s ‘Louder Than Bombsâ€™ that mixes the post-hardcore template with the huge skyscraper choruses and defiant attitude that make Time In Malta truly stand out. The rage in ‘What Are We Afraid Of?â€™ brings to mind the heady days when Hopesfall were the toast of the hardcore town (before they lost all their members); whilst ‘Fused As Oneâ€™ holds as a strong heavy rock number utilising soaring choruses and some nice punk rock influences. Whilst this is nothing essentially new, I can see how ‘Alone With The Aloneâ€™ with have definitely held its own and Time In Malta were perhaps the under-appreciated sleeper band of this genre and scene. Itâ€™s a decent collection and despite some tracks sounds quite similar, it sticks to its guns and what itâ€™s best at to deliver the cream of the post-hardcore/metal. Shame theyâ€™ve been defunct for 5 years now, but I suppose nothing gold can stay.

Verdict/worth the price â€â€œ I would say so. Thereâ€™s some moments where they sound so similar to Hopesfall, which automatically makes it a winner in my book and itâ€™s the right kind of hardcore racket that I enjoy, so whatâ€™s not to like really.