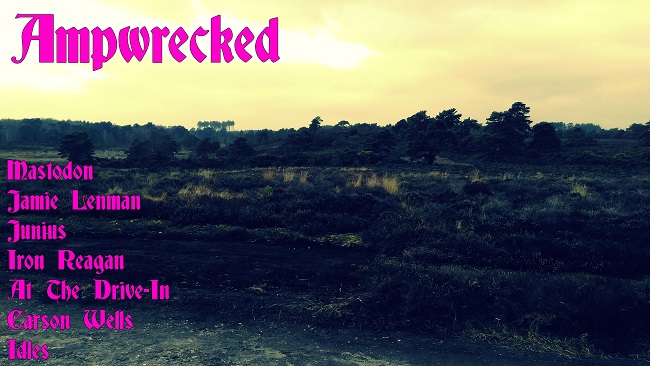 I don’t know about you, but I love that Brann Dailor is slowly becoming the frontman of Mastodon. Okay, so he’s not really, but ever since he started singing from Crack The Skye onwards, I’ve found their stuff utterly terrific. Remission/Leviathan purists are going to HATE this then, but fuck ’em, because Show Yourself, is cracking. It still has the beef of Mastodon; that low end rumble of throaty, barbed metallic-rock, complex drum fills courtesy of Mr Dailor. Hey, it’s melodic as hell in places – I mean, it ticks all the right boxes for being damn catchy. Mastodon have always been a fairly emotional band; think about all their albums, they tell a story; they’re incredibly personable. Show Yourself is pure Queens of the Stone Age-stoner-pop, but does that matter? Have you seen the song titles for Emperor of the Sand? One of them is called Jaguar God. JAGUAR FUCKING GOD.

It’s another re-invention of sound for Jamie Lenman then. After the double album delight of Muscle Memory (one side balls out hardcore chair-smashing delight, the other, banjos, pianos and fancy hats) Mississippi reveals another layer to the ex-Reuben frontman. Tripping down the industrial path, this new track crunches and bristles with almost Nine Inch Nails-esque mechanics. The steadfast, militant drumming, reverb-laden guitar shrieks, backing vocal chants of “I CAN’T LET GO!” weird animal howls and squeals in the background and let’s not forget Lenman’s distorted, acidic vocal bark. “M! I! DOUBLE S I! DOUBLE S I!” sing it with me – a wonderful and bonkers return. Album please.

This music video – somewhat heavy handed? You bet. Junius go over the top on their anti-fascist, LOOK AT THE HORRORS OF WAR message on Clean The Beast. From skulls picked clean by maggots, to nuclear Armageddon, to clips of mass rioting, it’s a bit full on. This post-metal shift and extravagant vocal delivery, coupled with the backing screams, mechanical guitar scythes and wall of crunching, bristling sound is a hard slog – don’t get me wrong, this is inventive; it’s laced with dramatic touches of ridiculousness from the spaced-out wash of noise to the odd-ball dual vocal trade-off of intensity.

Yeah, I’ve a problem with that spelling as well. Ignore it. IF YOU CAN. So Iron Reagan, who are basically the thrash version of Red Fang – think comedy videos, beer, nerds and being utterly awesome when it comes to riffs, songs and more riffs. Yer man from Municipal Waste is on vox as well, telling you all to “FUCK THE NEIGHBOURS! FUCK YOUR YARD!” which is then executed in glorious claymation and is frankly, the best mode for music video. This rules hard; it’s a riff-party in the mouth, utterly dumb as shit but it’s that kind of beer-drinking, can-crushing, chest-beating neanderthal crossover-thrash you need in these dark, apocalyptic times.

Regardless of feelings surrounding the line-up shift, the El-Paso haircuts that are At The Drive-In have returned to wreck more havoc. Incurably Innocent is the second song from their forth-coming fourth album and it’s…different. Not in a bad way though, yes, it’s a lot more melodic than expected. Cedric’s vocals don’t have that breathless chaotic spittle of Relationship of Command; (the fella is pretty much singing now as opposed to shouting himself mental) but it’s a solid, blast of their twisted, if ever-so slightly warped punk agitation. It’s snappy and taunt in places, the guitars are fairly clean to begin with, but become more frazzled and hectic as the track grows. Interesting – can’t wait for the album.

Belfast’s Empty Lungs don’t mess around – there’s barely enough time to make a cup of tea before they blitz through a track. Don’t Get It, is a fuzzy slab of breakneck punk rock goodness; injected with a bouncy, tuneful chorus, gruff-vocal barks, that melodic power-punk guitar twang, interspersed with hand-claps, gang-vocal chants, and a real Brawlers-style speed for good measure. Raucous, joyful and full of good feeling, this is a cracking slice of energy and zest.

No Country For Old Men fans I’m guessing? One of those bands that the words “real emo” gets tagged on to (as if that means anything really) but Aberdeen’s Carson Wells tap into those raw feelings on this new track, Same Grave. The dueling, earnest vocals, coupled with the taunt and tense guitar sound, not to mention the expansive nature of the instruments (you can tell it was recorded live) all adds to the emotive and expressive nature of this track. Superb – you can pre-order it through Time As A Color Records or stream below.

Weird shit alert. Whether this video is some warped tribute to your mum or not, I’ve no idea. There’s lots of ornament destruction though, as you witness one of the strangest possible-wakes ever. Smashing things? Check. Men in drag flailing guitars around? Check. Bearded fella in a pink suit snarling, spitting and roaring the words: “THE BEST WAY TO SCARE A TORY IS TO READ AND GET RICH!” at you? Check. Idles twitch and snipe at you through this scything and caustic post-punk hate racket, which is fucking loud (seriously, the instruments on this burst and crackle like Coachwhips) and it really is all kinds of excellent. Plus, the singer looks a bit like Clutch‘s Neil Fallon. Their album, Brutalism is out 10 March.