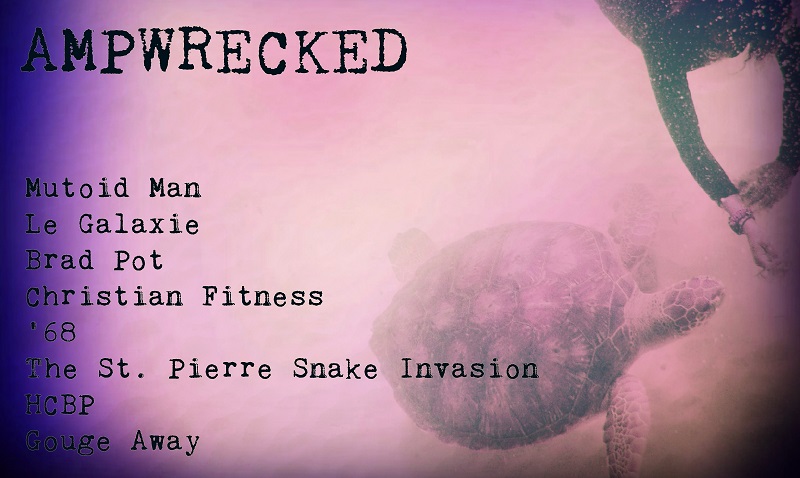 It’s Mutoid Man! Twirling a guitar around your head, air-drumming until your wrists fall off; it’s all part of the experience spliced together by Koller, Brodsky and of course, the master that is Nick Cageao. Melt Your Mind is just over 2 minutes of speed-thrash-excellence, that’s hella melodic in places (seriously, a lot of punk bands would destroy their back catalogs for some of the melody on this). Like a lot of MM stuff, this is an utter battering ram of brutal, raging energy, popping and explodes with frothing, gurgling joy. War Moans, the new Mutoid Man album drops 2 June via Sargent House. Can’t wait. “FUCK YOU RIDE!”

I always feel Le Galaxie are one of the hidden gems of the electro scene. Pleasure feels a lot more soothing and silkier than the punching beats of their debut and the flourishing grandeur of Le Club. This rises and rises like a wall built out of rainbows set on fire – twisting and churning through mesmeric chord patterns, stabbing keys, weird-trance-inducing hums and of course, extra vocals provided by May Kay of Fight Like Apes – wonderful to have them back as always – let’s night drive.

Sometimes, you just want some stupid garage punk. Luckily, there’s Brad Pot from Melbourne, who sound like a bizarre cross between The Damned fighting Radio Birdman. I love how at the start of this, when the bass note kicks in it sounds like an actual air-strike hitting. Chances are you’ll be singing “WAITING ON THE ASHTRAY!” as I am now. Tip – make sure to pause it at the 2:20 mark, less you want to experience a lot of gunfire into your headphones. This is great; you can smell the sweat and determination radiating off of it and the unique vocal shriek courtesy of yer man in the sunglasses is certainly a treat.

With Slap Bass Hunks (the fourth album under Falco’s Christian Fitness moniker) dropping in the next bit of time, here’s a track from it about a chap called Bruce who dislikes dogs. Fair play, but he is a lot of fun. “Bruce hated puppies, he thought they barked to spite him” states Falco, in an almost bored, detached way – as if he’s giving a statement during a police investigation. In keeping with making sure “this sounds like nothing else ever” Christian Fitness tap into the weirdness airwaves, especially on the moment that sounds like a demonic possession gone wrong and the rickety, stop-start bass thump, which sounds a bit like the Jaws theme with extra notes, shouting obscenities at you. Fucking great.

Somewhere, a guitar with a LISTENER sticker is possibly being launched into the air and hammered on by a man in a checked shirt, whilst he throws himself around a tiny stage/rehearsal room/your mum’s house. Whilst this doesn’t quite have the full ‘feral’ appeal of this demo that emerged ages ago, the duo of Scogin and McClellan claw and punch their way to your eardrums with this blistering gutter-grunge of debauchery of a guitar that’s not quite plugged in and a drum kit being smashed apart. You can hear the laughter, the missed notes, the custom percussion – the way Scogin is possibly tearing apart his hands on his strings. I even like the fact it has an almost rap-rock intro to this – seriously, listen to the first 40 seconds or so and tell me that’s not proper red-cap-wearing-posturing. Careful with that mic, ’68. Fiery.

Bloody hell. As you’d expect from the group of collective nutjobs that make up The St. Pierre Snake Invasion, this is fucking hostile. Rough, scrappy, dirt-encrusted hardcore delivered with the speed and fury of early The Bronx. This spits great globules acidic blood, which coat the rusty, crackling guitar chords, coupled with the grunge-punk drum intensity and the paint-gargling vocal yelps it’s a terrifying and wonderful blast of twitching, volatile energy. It’s all too brief; lasting a mere 76 seconds TSPSI are a lesson in clawing demolition. More, we demand more of this flesh. Available via Too Pure singles club in May.

HCBP = Haggard Cat Bothday Present. No, me neither. Best to enjoy it and not question. Two parts of Nottingham knee-destroyers, HECK,  HCBP I would like to say are more sensible, but it’s just as daft really. HCBP are a crude sketch of a band and are dangerously good. Some moments are straight out of the Pulled Apart By Horses book  of high-fives and writing tunes about ultimate power and experiencing maximum life (seriously, the guitar tone on this), whilst their are moments of Josh Homme-esque composed melody, structure and that intricate robot-rock that offset it perfectly. Check out at the 0:47 mark, THAT FUCKING RIFF is monstrous and total fuzz-stoner excellence. Plus, the band fight robots in their video, which seems to have filmed in a drug-filled kaleidoscope. Yes. Also, that ending – ridiculous.

I’ve not experienced or had contact with the music of Gouge Away before, but I might well do now. One word – wrought. I mean, this is just…violently passionate and powerful in equal measure. “I crawled out of the grave…” croaks vocalist Christina, who doesn’t sound like she’s experienced total relaxation. Her voice uniquely changes from moments of almost cracking under the pressure, to full blown clawed, frenzied angst and it’s breathlessly tense. It reminds me of the first time I heard Touché Amoré – immensely dynamic, well-constructed hardcore that beats like a ravaged heart.