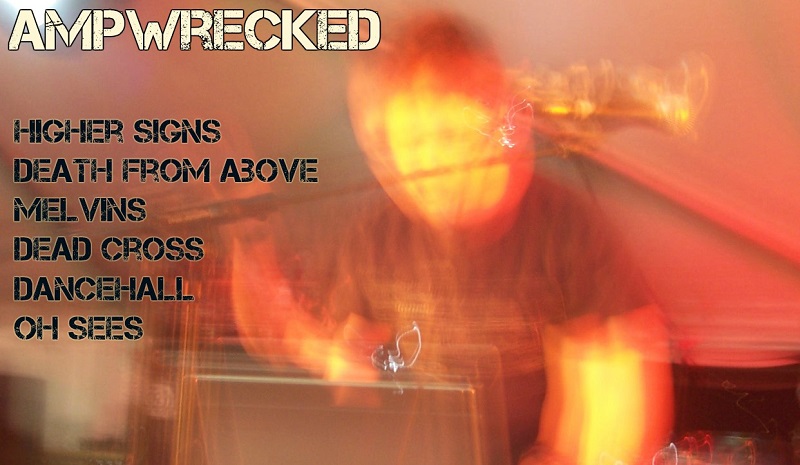 The sudden and shocking rasp of vocalist Sam Hargrove from Toronto’s High Signs is more than enough to wake you from a slumber. His cutting, Chuck Reagan-esque bark has the snarl of the Gainesville punker – ravaged and raw and suits their danceable post-punk shuffle to a tea. A Much Larger Ocean is the first single from their debut album If So, Then What? and it’s obvious to see why; this is an absolute blast of intense and melody punk beauty, tapping into the fire of early Japandroids crossed with the spitting, crunching abrasiveness of Hot Water Music. Infectious, positive and uplifting this is a cracking start from this duo.

Death From Above – Freeze Me (Last Gang Records)

So, does this mean we won’t have to wait 10 years until a new record? Sweet. Death From Above (now sans ‘1979’) are back (in pog form) with a new single, a slightly changed name and a bizarre video full of body builders and some obvious social commentary. This straddles boundaries between clean and dirty; Grainger’s vocals are brilliant (as usual) and Keeler brings shedloads of fuzz from his four-string, drenching everything in this warm, crackling glow. The flourish of keys that litter this are a nice touch and bring to mind the creeping into of Turn It Out from their debut. It’s also seriously melodic, especially on the meaty-sounding chorus and is of course, so damn infectious as you’d expect. Excellent work.

Well, this is fucking brilliant. Steve McDonald of Redd Kross and Off! is the voice on this (instead of Buzz) and he seems genuinely concerned about what the hell is wrong with you? Only joking. This version of the Melvins is obviously having a shitload of fun at the moment; this almost has a spooky-surf rock vibe to it, full of tight pop-hooks and swampy-guitars. The gang-vocal bit that seems to reference ‘Ice-T’ is a particular highlight and for the most part, this definitely has a creeping sense of comical dread, which can only be a bonus.

We previously featured Dead Cross last year and this is a new track, with a line-up change. Gabe Serbian is out and Mike Patton is in. This is fucking nuts as you would expect. From the morse-code esque opening 20 seconds, this bolts from the door with bristling, fiery energy. That bonkers bass-tone of Justin Pearson is ever present; see-sawing and chewing away with gnarled, thrashing envy, whilst Patton’s snarling, mouth-frothing vocals are a rabid and operatic throwdown of majestic chaos, even the weird gulps of air he takes at one point. Tense and wrought, Dead Cross are ones to watch and I for one, can’t wait to hear more of this madness.

Formerly The Semper Teens (remember them?) Dancehall are a new project from ex-Kill Kenada frontman, Timothy V. Whilst this is the b-side to the single Virgin, I actually prefer this, so that’s what I’m going to talk about. Elements of Kenada’s sound bleed through into this; it’s heavy on the distortion; a rumbling roll of noise-rock rhythm, crashing cymbals, ghostly vocal yelps and crackling, shoegaze-guitar lines. Some moments remind me of the raw-rock shred of METZ if their instruments were more in tune.

Whilst my interest in John Dwyer’s Oh Sees extends only to Carrion Crawler/The Dream and last year’s A Weird Exits it’s quite clear how much this new track would appeal to me. That bristling, garage-rock vibe beats and throbs like a heart going into overdrive. Dwyer’s guitar work is sporadic, twisted and ever shifting – from sweaty, shredding freakouts to this minimalist, driving pulse at a flick of the switch. This is the sound of being chased; this is the sound of gears crunching and the revs getting louder and louder as you make your escape. It all gets oddly euphoric around the 3 minute mark – before diving headfirst into the scrambling rush as all the instruments clamor for position. Odd and obviously, brilliant.