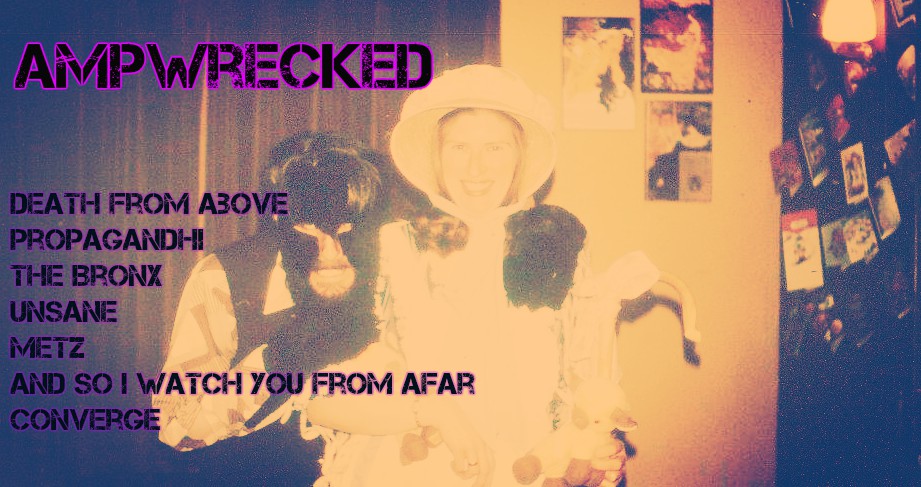 The comments below Death From Above‘s latest single are certainly interesting. Content to continue dividing opinion, Sebastien Grainger and Jesse F Keeler push the boundaries of their minimal set up, especially on Never Swim Alone; which, sounds like a wrestler’s entrance music. Seriously. Don’t read this as a criticism though – it feels more in common with Grainger’s excellent solo work than anything else – sugary, bouncing pop-rock, layers of flamboyance, his almost rap-sung vocal drawl, driven by the synth-led bass fuzz and electronic drum-clashes. If someone told me this was a remix of their work, I would believe them. Kudos to them for trying something new, even if it’s a bit short.

“Sit down with me, let’s have a drink” sings Chris Hannah. How nice. This 2 minute blast of raw energy, courtesy of established thrash punks Propagandhi is quite excellent, combining their trademark scything drive with heaps of powerful melody (something which they really excel at – see Today’s Empires, Tomorrow’s Ashes). They also demand we have a rock ‘n roll party tonight – so let’s join them. This is a strong follow up to the album title track they released a month ago.

This Matt Caughthran-led party machine can do know wrong (IV was a bit hit and miss in places for me) – but their consistency is electric. On Two Birds, The Bronx tap into their heartland rock sound even more, leaving their hardcore image at the door. Big fan of the guitars of Joby J Ford and Ken Horne, which howl and squeal with noisy agitation and they even strangle out a solo for good measure. I have to say, the backing vocal wails on the chorus are vintage Bronx and the whole thing, struts and swaggers with almost Safe Passage-esque bravado. A brilliant mix of II and III – welcome back lads.

“Got any noise rock?” Probably. Unsane seem to have a thing for blood on their album covers and this one is even less subtle and a complete splatter of the red stuff. There’s a crisp and scratching rage to Aberration – frontman Chris Spencer has a vicious acidity to his voice, gargling and raw-sounding, it’s uncomfortably sore, alongside the sludge-noise that emanates forth;  distorted and twisted through a howling spectrum. You can hear every mangled bass- twang, every rattling snare and every grinding riff and it’s unnervingly excellent.

Attacking the airwaves like a ravenous horde of the undead, METZ chew their way through on this new one, titled Mess Of Wires. The brilliantly twisted thing about this trio is just how dangerously sharp, jagged and punishing their sound has become. From the explosive drumming, to the wall-scraping guitars and garbled vocals, METZ continue to bring the thunder. This new track (and first song off their new album, Strange Peace) is a bludgeoning kraut-rock mush of fuck off-noise and it’s no surprise that Steve Albini helped with the recording. Brutal, alive with sound and pumping with rickety, heart-straining energy right down to the last gasping breath.

Someone must have set off the “we need something triumphant to happen” beacon. And So I  Watch You From Afar are all about making the kind of sound that makes you feel as if you’ve climbed a mountain against the odds, or defeated a particularly difficult end of level boss on the hardest setting. A Slow Unfolding Of Wings is the kind of overly dramatic title they like to whip out and the music on offer bristles and erupts with euphoric beauty. There’s no vocals, not even a “woah-oh-oh” – just riffs, lots and lots of riffs writhing and somersaulting over each other. It’s not as heavy as their work on the Letters EP or Gangs, but it falls somewhere between the more rock-moments on Heirs and the crunching nature of their first album work.

Proving to be as uncomfortable as ever, Converge make an ugly, contorted return. From the strength of I Can Tell You About Pain and the near 8 minute sprawl of Eve, Under Duress is the see-sawing trepidation of things slowly decaying and falling apart. The off-kilter hardcore-beatdown is a squealing ricochet of pain-inducing noise and terror – vocalist Jacob Bannon continues to have the most unique disturbing set of pipes, but he really comes into his own on this with his scrambled, word-salad fury. Credit to the suitably sludgy-rock chorus, very Floor-esque. Crushing, absolutely crushing.