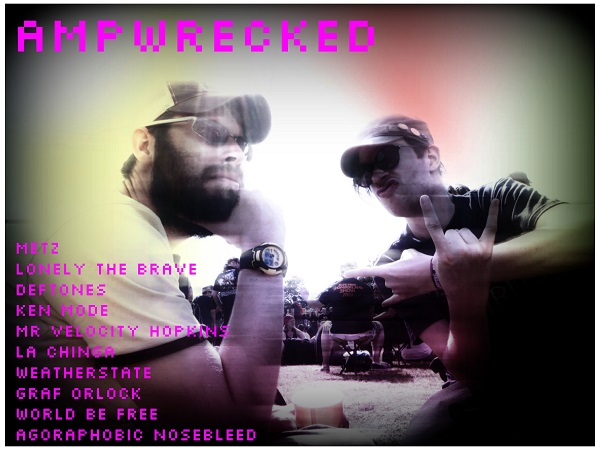 I want to talk about METZ again. After teasing us with the scathing bile of Eraser at the tail end of last year, here’s the teeth-rattling shriek of the flipside, Pure Auto. A buzzing, miasma of disdain and the hangover from hell lurches forth on this. Vocals are buried beneath the snarling caterwaul of mangled guitar shredding, as ugly riff after riff is hammered through failing amplifiers at impossible speeds. You’re best to experience METZ at howling noise-levels on the live circuit, but for now, Pure Auto truly does capture their splintered, maddening punk charm. Fast, erratic, savage and glorious.

Following up The Day’s War will be some mountain to climb for Cambridge lads, Lonely The Brave. On the strength of Black Mire, the first track from their as-yet-untitled-second album, they’re part of the way there. The vocals of morose soul David Jakes are lathered in reverb on this; giving his sombre and rich tones an almost ghostly and bitter seasoning. Musically, it packs a hell of a punch – huge, dark and forever-brooding melodic rock grinds past, with licks of Deftones-intensity; gone are the pop elements that made up their debut, yet it still holds up a boombox blasting out real fucking feelings at full volume. Black Mire is utterly thunderous.

Speaking of Deftones…their new album, Gore, is out in April. The intro to this new track, Prayers/Triangles, is almost shoegaze – from the feedback-laden first half, it slips nicely into some dream-like, electronic beats before slamming home with those crunching, slab-heavy guitars and Chino’s raw and emotive vocal barks. “You’ll never be free” croons Chino over the post-metal chorus, which churns and boils with tension and bubbling energy. Welcome back.

Absolute LADS more like. KEN Mode are stonking brilliant, but you should know this already, yeah? KEN Mode are the kind of band that if you asked them to produce you some riffs, would utterly bury you and everyone you know under their monumental onslaught and keep going long after you’d stopped moving. The stand-out lyric here is the indignant shout of “everyone I know is such a fucking mess!” which is delivered with such scathing, ‘fuck you’ vitriol, it becomes so gleeful at the same time. Props to the menacing bass-led quiet moment that explodes into a thumping juggernaut of crushing, gnarled punk rock head-banging gluttony at the end. Man, this shouldn’t be so good, but it is. Watch the video below.

Set guitars to ultimate groove fun times for this one. The notion of serious has its trousers pulled down in front of everyone and sprayed with silly string on White Witchy Black Majik, which sounds like party-monsters Wilson jamming with Atomic Bitchwax whilst Turbonegro make thrusting motions behind them. La Chinga are all about monstrous, acid-soaked riffs that have been dredged from the well of the stoner. Slap a health warning on this – it’s far too infectious and drips with grinning ridiculous joy. Great, great video as well. Also, a rough translation of the band’s name, means that they’re actually called ‘The Fuck’ – holy moly!

I predict they’ll be a pop-punk revival this year. Weatherstate are keen to get ahead of the pack, especially on Ill, the second track from their new EP, Dumbstruck. We’re not reinventing the wheel here (thank goodness) but we are harking back to early Green Day; flying the flag of slacker-rock attitude and apathy. Nasally vocals, with a slight lip-curl sneer, coupled with grunge-punk choruses and a deeply infectious melody, not to mention the pop-bounce of Weezer.

Graf Orlock are the best band you’ve never heard. They sing about movies and shit (cinema-grind) and in this case, their album Crime Traveler contains clips and lyrics from a film the band’s members wrote, directed and starred in themselves (incidentally, the film is about a French-Canadian assassin who discovers a wormhole and travels back in time to rewrite history for Canada.) 600,000 Tons of Explosive Ordnance is as destructive as its name suggests – the drums are like sledgehammers, the guitar work switches from long-drawn out drones to their usual grind-math-metal splatter, whilst the dual-vocal back and forth spits with eye-popping venom in every direction. They even manage a solo at one point. See you in the pit.

Fans of hardcore mob Terror will recognise the mouthpiece fronting World Be Free – a supergroup, made up of alumni from Gorilla Biscuits, Strife, Despair and Rival Schools. It’s like a time machine (stand down, Graf Orlock) listening to World Be Free; they’re chucking you back to a world when the PlayStation was a grey box and the only game you played involved doing a kick-flip mctwist. This would perfectly soundtrack any skateboard video; it’s full of vigour, relentless energy, snarling, fist-in-the-air skate-punk fun times and brings to mind the ‘Gotta Go’ attitude of Agnostic Front, especially the gang-vocal chant. Radical dudes.

Taken from Arc, the first part of four scheduled EPs for this year (one for each vocalist) Agoraphobic Nosebleed are hitting the studio hard it seems. Darkness envelopes this and roars of tortured pain and hate. Vocalist Kat Katz at one point screams the chilling words “stop hurting me! Why are you doing this to me!” and you can tell she’s heartbroken and seething at the same time. Musically, it straddles the line between doom and metal, with elements of their previous grind persona bleeding through and moments of sludge-metal groove, all courtesy of guitarist and programmer Scott Hull. Emotional, crushing and warped, Not A Daughter is draining but then, it comes from a very personal place. Listen below: