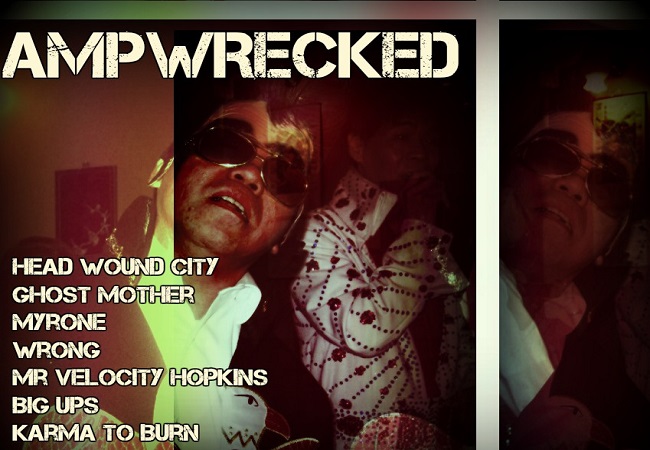 Wow, I thought this lot were dead. Head Wound City formed in 2005 (featuring members of The Blood Brothers, The Locust and The Yeah Yeah Yeahs), released 10 minutes of brutal power-violence hardcore and then fucked off. Eleven years later? Best put out some new songs. Scraper, sounds like it’s still forming as a song – this is a good thing. To begin with, the bass is a stuttering, gurgling throb, whilst Jordan Blilie’s withering yelp is surly, masterful – And every day we rise…” he snarls, like some kind of macabre Bond villain, as the track finds serious edge, exploding into a vibrant splatter of cathartic, antagonistic disgust. This is a thunderous, unexpected and an incredible thrill rush-return from this bizarre and savage supergroup. The album, A New Wave Of Violence, is out in May – can’t wait. Utterly sick, as is the video, check it:

From Arizona, Ghost Mother aren’t ones for keeping it sounding the same. Rainbow Black, from their most recent EP, Drug Money (released 17 March through bandcamp) rushes down a busy and clustered tunnel of ever changing sounds, styles and rhythms. What starts off as fairly crunching, post-hardcore in the same vein as Watch Out!-era Alexisonfire, takes a trip through atmospheric grunge-rock, biting, angry punk rock and concludes in a noisy, math-metal coda of frantic speed, as if it can’t wait to finish. There’s lots on offer here and the swampy, expansive production makes it sound massive and brimming with tension. Strong.

HOLY SHIT. Guaranteed to lift the blues (aka, fire them into the sun) Myrone brings the absolute (soft) shred. Most feel good riff you’ll hear all year? You bet. This is wind-milling your arm from a great height around and around as you mash them cheese-scented power chords into oblivion. This has Rocky IV soundtrack splashed all over it, jamming with Queen’s Flash album- such triumph and ultimate fist-in-the-air adulation. It sounds like the start to every campy-80’s action sequence ever mashed together into one big synth-wave pulse of pure joy. How can you not smile at this? Life-affirming, silly and bloody brilliant fun. Feels very Adebisi Shank Mazel Tov/Big Unit–wise, which can only be a good thing.

Spitting a torrent of warm beer into your face, it’s Wrong. Featuring former members of Torche (apparently), Kylesa and Capsule, these dudes utterly rip it up. Remember that low-end, guttural, tinny snarl that Helmet had on Aftertaste? Imagine that being played by a hardcore band and you’re somewhere in the ball park of Wrong’s turbulent and frothy sound. I love how this switches from utter circle-pit mayhem, to that grinding, machinery-grumbling breakdown at the 0:36 mark – it’s fuelled up with sweat, alcohol, debauchery and belching. Great solo as well. Fans of Unsane will totally dig this shit; let’s party.

Remember the name, these guys should be huge. Big Ups are four dudes from New York, who make weird, noisy and incredibly interesting punk rock. Capitalized is from their new album, Before A Million Universes and it’s bloody weird, in a good way. The opening bass grumble (which dominates all of this 2 minute-smackdown) is menacing, agitated and bristling with tension. When the vocals kick in, the track throws itself forward with snotty, Reagan Youth-style attitude (scrappy, mangled determination) whilst the odd-ball chorus of spoken word chanting, backed by that bouncing bass riff, twists into a spitting and snapping pop-hardcore ecstasy. Nice.

Mate, it’s Karma To FUCKING Burn. Best take your shirt off, because you’re going to be a sweaty mess air-drumming to all of this near 5 minutes of experimental, instrumental stoner-rock groove-a-thon. It’s just William Mecum, (guitarist and only founding member left) jamming in a variety of places like shitty bars, toilets and even an ice rink, but damn, if it isn’t good. That southern-metal twang resides beneath the crunching, monster-truck riffs that Mecum draws from his six string, and moments of the blues-jam vibe of 37 (one of my favourite K2B tracks) roars brightly on 62.