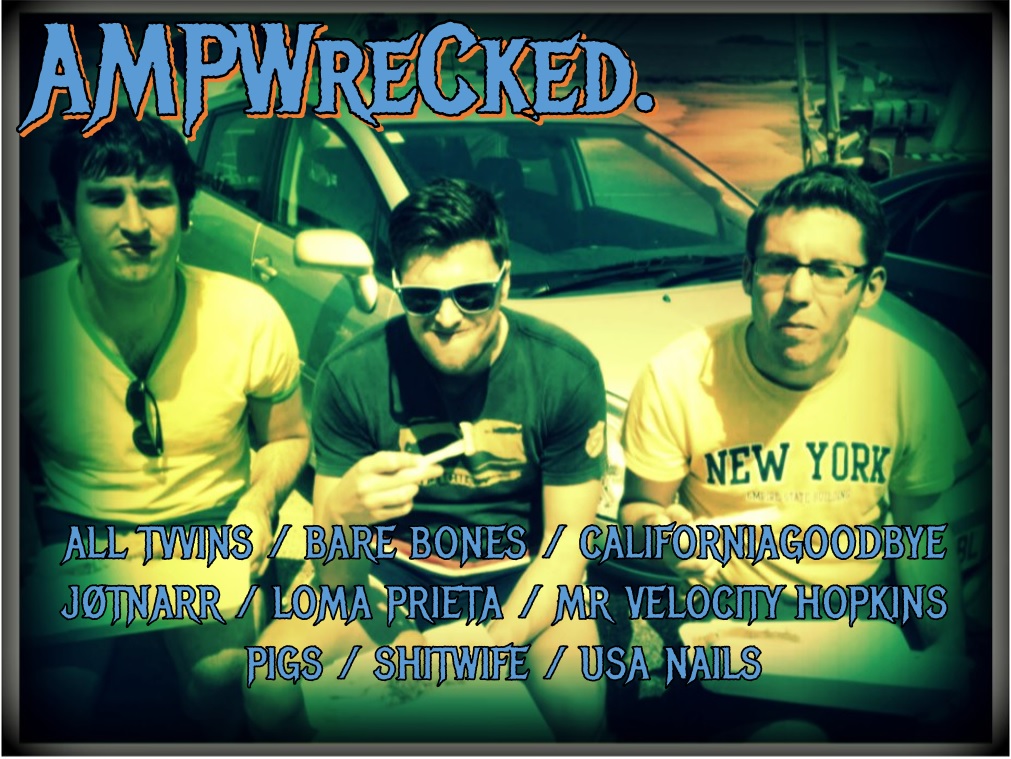 USA Nails have been polluting the airwaves with their bizarre toxic noise for a while now and rightly so. I Am Normal is harrowing, hell-spewed discordant punk rock and is about 100 times darker than the material on the warped majesty of the 2014 debut, Sonic Moist. Steve Hodson doesn’t seem to care his vocals are buried in this swirling vortex of feedback-drenched chaos – he’d rather lose all control, shouting himself hoarse over this bitterness. Their new album, No Pleasure, is out in November through Smalltown America – pre-orders for your (no) pleasure.

Raw, blooded and probably incredibly complicated – Loma Prieta bristle with tension, pain and heartbreak. Never Remember is a mishmash of rafter-swinging, stage jumping speed and passages of stabbing melody woven together in a wild rhythmic fury. This 2 minute face-breaker is teeth-spittingly focused and reminds you that screamo can be stonking great and utterly devastating, see the lyrics: “the hope that I’ll become a living thing has me lying in wait…” – damn. Self Portrait, their fifth album, is out on Deathwish Inc in October. Boom.

Fuck, this has got me seriously pumped. PIGS (great name) are Dave Curran of Unsane, drummer Jim Paradise and bassist Andrew Schneider. The bass on this churns up all the silt, dirt and rot from the bottom of the seabed, whilst Curran’s vocals are a deranged, southern-rock howl of whisky-soaked delirium as you pour more fuel on the fire, cackling maniacally. Alienating, stamping noise-rock that will make you as happy as a porcine in shit. Wronger, is out on Solar Flare Records in September.

First thing – this is hilariously brilliant, brutal, fun and makes me want to peel my skin off. Shitwife is Henri Grimes (Shield Your Eyes) and Wayne Adams (Ladyscraper) and they want to fucking party hard. An ultimate rainbow explosion of blister-inducing drumbeats, spliced with heady, waves of spiralling electronic-haze and a megamelt cascade of rampant, ecstatic joy. Why do anything other than enjoy life? Shitwife are having the BEST time ever – get aboard the party train. The album, Big Lad, is out through Sapien Records.

Surprisingly not Norwegian (despite taking their name from the massive troll in Troll Hunter) JØTNARR are from Colchester and dredge up the kind of down-and-out-low-end noise you’d expect. The realm of black metal has been pillaged and spread before you – inhuman, unearthly wails that feel like your throat being sandpapered cut through the scrappy drum licks, whilst the dual guitar assault begins at a rolling hardcore attack, before morphing into a churning boil of scything misery. Wonderful! You can download the Burn and Bury EP right now. Go on, do it.

“Bare Bones had a couple of hundred bucks to make a music video…they drank it instead” reads the text overlay for their new song, White Knuckles Black Tar. Not sure we need to say anything else really! I’d expect nothing else – their last video involved, beer, beer, beer and more beer. They know how to write an infectious chorus and this proves to be a particularly raucous ear-worm of party-metal-punk rock in a similar vein to (now defunct) hip-shakers, Arms & The Man. Some nice southern-metal riffs thrown in alongside the clean/screamed vocals, which show progression from their Cut Throat Living EP that came out last year. Great job!

So, this is a concept album about a 1977 spaghetti western called California. Yes, really. It’s also the name of “this shit band” according to their confusing tumblr profile. For something that’s seems to have put together as a joke and with minimal thought, CaliforniaGoodbye‘s sound is thunderous to say the least. The production is razor sharp – the guitars are a grinding, hectic assault, whilst the bludgeoning punk rock drumming and overlapping, feuding screams and snarls really make this all-to-brief 73 second thump of crust-grind-hardcore a vicious ride. Download their album from their bandcamp and continue to feel confused.

I was initially sceptical about All Tvvins – it seemed too ‘safe’ for a guitarist like Lar Kaye’s incredible technical ability (listen to anything by his former band Adebisi Shank for proof) but their sound and continuing string of singles have all been beautiful expressions of just how talented he and fellow axe-man, Conor Adams, are. If you cut Darkest Ocean open it would bleed lucious waves of 80s synth-pop like a fucking torrent – it would drown you in it’s enveloping waves, disco-drum patterns and rave-style passages of coded-electronic warmth. Stunning, absolutely stunning. Album? Yes? When? WE NEED TO KNOW.