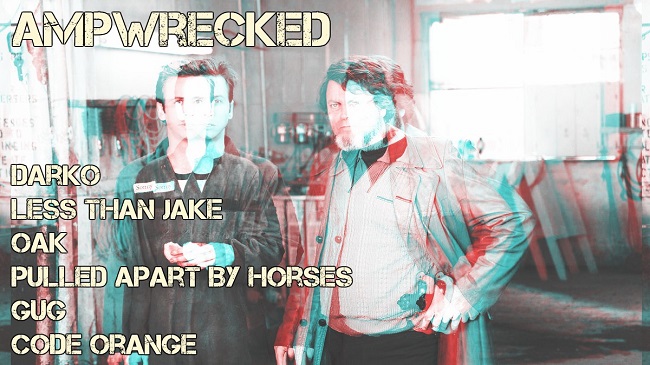 We’ve talked a bit about Darko before on Keep It Fast, a band who stalwartly thunder through their own brand of melodic punk with frank and earnest pedal to the medal power. For those who love the turbo-charged energy of Gnarwolves, you’ll dig Hiraeth, a raucous, 2 minutes and 40 seconds of thrash-pop excellence. From the rasping, scrappy vocal trade-offs, to the fizzling fretboards and Four Year Strong-harmonies, these punks are having such fucking good fun, it’s hard not to crack a smile during this exuberant and punchy slab of punk rock.

I’ve a lot of time for Less Than Jake – a band who are oddly responsible for a lot of my musical leanings, even though I’m somewhat distant from their ska-punk tomfoolery nowadays. You know what though, this is pretty damn good. The horns are there, it’s so upbeat, it’s punching right through the sky, Chris and Roger’s dual vocal attack is exceptional as always – yes, maybe it was better when all they sang about was smoking endless cigarettes, coffee and leaving places, but this is still valuable arsenal to their empire of cracking tracks and feels like it fell off the GNV FLA sessions somehow – plus, that chorus is bouncy as hell. Kudos lads.

GUG are three dudes from Manchester making a fucking racket. The baritone guitar on this pumps out actual slabs of red, dripping meat, splattering it everywhere, whilst the rickety drum smashes, squawking vocal yelps and upbeat-almost-dance-punk snake-like beat keeps it all in check. Or as much as you can really for a group made up of ex-Cleft and Bad Grammar band members. Special note to the part where it goes all teeth-gnashing, bendy-noise-from hell, which is superbly deranged and nasty soundings. Lovely/evil stuff.

OH MATE. Because we don’t all have to be happy. Wrought; that would be one word to describe this from Oak, three dudes from Sweden, making fucking hardcore. This is utterly flaying the meat from bones, through a filter of Wes Eisold pissed-off endurance. Your personal space will be invaded as the waring vocal clashes of the main screamers on this crash into each other like two runaway trains. It’s fairly bro-core in places, before diving headfirst into a screamo bombardment of razor-sharp riffs and spiteful vengeance – “I AM BROKEN! WITHOUT REASON!” Woah. Future hardcore heroes right here, see you in the pit.

Pulled Apart By Horses – The Big What If (Amplified Recordings)

My favourite Pulled Apart By Horses memory was them at Sonisphere in 2011 when vocalist Tom Hudson honked his guts up between songs and continued playing/screaming/telling us he’d punched a lion in the throat even though he was obviously utterly steamboats/hanging like a bastard. Their debut is still one of the greatest debut albums of all time and their return is all kinds of great. The Big What If is stocky, antagonistic and full of their snotty, spiky, trash-rock aesthetic and familiar crunching guitar-tones that were last splattered all over Tough Love. I’m excited and so should you be – check out their new vid and that. MACHO!

I decided to give Code Orange another go to see what I was missing. Still not getting anything from their live shows, but Bleeding in the Blur is a a real misdirect, a bit like Head in the Ceiling Fan from Title Fight‘s Floral Green. Instead of drummer Jami Morgan screaming his face off; vocalist and guitarist Reba Meyers takes the lead, giving this track a heavy nod towards Code Orange’s other band, Adventures. This is a slick, grunge-pop number, with crackling and sizzling metallic licks burning beneath the surface and Reba’s warm, dream-like vocals. It predictably starts to get darker near the end as the throaty and bloodied screams break through, but there’s a lot of glean from this woozy, shoegaze-esque number. Top stuff.