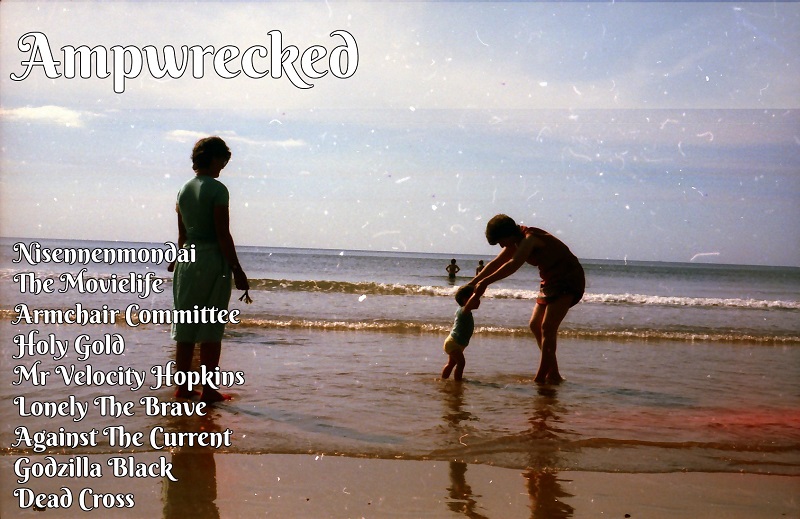 The beat on this is essentially a pulsating heart. It thumps with nervous, twitching energy. It never stops or alters in anyway. No, that’s left for everything else surrounding to have that fun. Nisennenmondai are a Japanese instrumental three piece who create these strange, ever-evolving compositions. I mean, you have no idea where this is going – the repetitive tapping percussion that sounds like a thousand type-writers clattering away in unison, the sudden whip-cracks, what sounds like explosive gunshots, fractured cymbal tapping, bouncing, nonsense chords that float between the left and right speakers…it’s a trippy, bending, tour through the mind of a robot having a severe technical malfunction and one broken circuit from going full Westworld on us all. Oh and this is just the edit. The original track is 12 minutes long. Mind mega melt.

First new song from The Movielife since 2003? Go on then. Vinny and co. return with this free download (see player below) – like all Movielife songs, it’s packed with hooks; oddly not as direct and poppy as their material on This Time Next Year, this falls into the slight post-hardcore pogo of their Forty Hour… material. Vinny’s vocals show signs of time; his gleeful shout is scratchy, with  a slight Chuck Ragan edge. The discordant and erratic bounce of this feels so Title Fight in places and shows strong and concentrated progression from the scrappy pop-hardcore of their early material. A solid return.

A thank you to Daniel P Carter for this one. Armchair Committee fit into the similar stomping rock ‘n roll swagger of bass-driven duo, Royal Blood. That familiar, low-end, slightly scuzzy, slightly blues-rock shift, coupled with pounding drum beats, distorted vocal warbles and a spacey, metallic surge of almost Clutch-esque groove. Domovoi is also free to download from their website, so no excuse really to not give this a blast.

Featuring ex-members of Douglasville chaotic-hardcore mob, The Chariot (what a band), Norma Jean and Glass Ocean emerges Holy Gold – a different prospect. Throaty, metallic shrieks and wild guitar swinging has been replaced with solemn, brooding, monolithic hard rock. Bat-Bird is about a bat flying into a bird and getting stuck; it also isn’t a million miles away from the grunge-punk scrape of Josh Scogin’s ’68; as is drags slovenly riffs through the southern-garage-rock hip-shaking swagger, with a sludgy, thick groove and throaty, lip-curling vocal snarls. Foot-on-monitor epic rocking guaranteed, this is a brilliant introduction to a promising sounding band.

Ah Lonely The Brave and your weird, weird sound…not a criticism; it’s refreshing to hear a band who sound different on every track they release. Their blend of grunge, punk and alternative rock, is a joy to experience, as is the dulcet and emotive tones of a one Mr David Jakes. The extra-terrestrial Radar falls in to a similar camp to Black Saucers from The Day’s War – a splatter of punk rock riffs, scratchy, low-fi production, chunky bass thumps, 90’s rock action energy – it sounds like it fell off a Jade Tree Records compilation and it bursts with melodic heartfelt beauty and burns with a new-found confidence. Cracking stuff.

Against The Current – Running With The Wild Things (Fueled By Ramen)

Writing the kind of infectious pop-rock song that’s comfortable to lay the kind of foundations it would take a sizeable amount of super-human powers to dislodge takes some doing. Against The Current have been setting up shop for ages now and see no signs of moving. There’s a slight disco-pop element to Running With The Wild Things, underpinned by vocalist Chrissy Costanza backing “ooh-oh-oohs.” There’s no dressing this up thought – it’s that foot-tapping, arm-flailing, indie-pop rock that rips through the defences, carried by Constanza’s voice, which is absolutely spot-on and dripping with vampish-macabre.

Obviously Japan haven’t sent these guys a cease and desist letter yet. Perhaps they prefer them to HECK? Whatever the case, Godzilla Black exist in the same maddeningly bonkers world as Nisennenmondai. Giving an obvious nod to Mike Patton, this switches from jerking jazz-funk experimentation, thumping rhythmic passages of sleazy, grinning noise-rock spliced with a horn-section, a dual-vocal trade off (ala The Blood Brothers), squealing electronic vocal rasps from hell and the bizarre hardcore scramble of Down I Go (who I feel have had some influence). Whatever the case, and whatever this actually is, I know I like it. A LOT. Available for free download below:

Some very good reasons to love this. New band from half of The Locust (Justin and Gabe, obv), Michael Crain of Retox and Dave Lombardo of Slayer. Fuck. How? Dunno mate. Dead Cross utterly kills though – Gabe Serbian is the mouthpiece and he sounds like he’s been up all night screaming his head off – his voice is in red-raw tatters and sounds evil as hell. Late-80s sounding thrash-hardcore pummels past, all metallic licks, small grind-passages and a feeling of utter revulsion and hissing spite, ending in a squeal of menacing feedback. Would ideally soundtrack a thousand skateboard accidents. Two thumbs up.