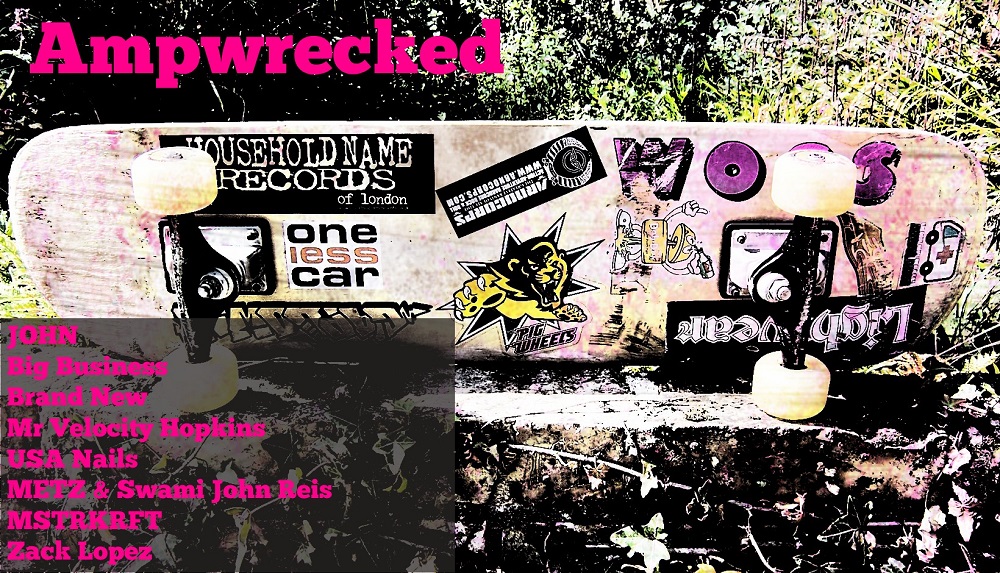 JOHN – Culture Trip (Till Deaf Do Us Party/Alcopop! Records)

Pummelling would be a good way to describe London’s JOHN. Whether this is through the monstrous drumming or the scything riffs created by this duo, they hit hard and fast. You can feel the sweat flying from John #1’s head as he batters his kit to death, turning only to let rip with his venomous shout to the microphone nearby. John #2 is content to just cut a bloody pathway with his six-string, which howls between chunky, noise-punk and a heavy-grunge tinge. Destructive and raucous, there’s lots to enjoy surrounding this delightful and crunching slab of savage raw-rock. Lose your shit immediately.

It’s another power-duo (now slimmed down to their original line up of Coady Willis and Jared Warren) Big Business have a new album in the works (Command the Weather) and a new song! The bass on this hums like a gigantic swarm of angry bees, whilst Warren’s delivery falls somewhere between large ham and classic-rock wails. The rhythm on this is absolutely thunderous (what else would you expect?) a pure sludge-metal roar of triumph and has one hell of a groove sandwiched between the pounding drumming courtesy of Willis. Superb work.

Brand New – I Am A Nightmare (Procrastinate! Music Traitors)

What in actual fuck are Brand New doing? Are they trolling us now? No album for 7 years, cryptic messages on their website, 2 random new singles (Mene was released last April) and now this, I Am A Nightmare, which is frankly astounding. The hook on this could puncture a hole in our atmosphere, sucking the world into some horrific vortex/hell dimension, whilst the song itself is pure emo-power-punk, harking back to their Your Favourite Weapon days regarding melody, yet it’s morose and despondent enough (through vocalist Jesse Lacey’s delivery) to find a place on Deja Entendu or The Devil and God Are Raging Inside Me. “I am a nightmare and you are a miracle. Coming out of the ground, it’s kind of freaking me out” chants Lacey – what are you doing Brand New, because my nerves can’t take much more. Absolutely fucking brilliant, I don’t think I could ever tire of listening to this.

With Middle Class Rut on hiatus after touring for what seems like forever, guitarist Zack Lopez hasn’t hung up his instrument just yet. Rather than sit back, he’s been busy working on some songs for his new album Bloodlines, through Pledge Music. Obviously, this isn’t a million miles away from MC Rut’s sound – Lopez’s distinctive Perry Farrell-twang is ever present and the tracks pounds along like the ramshackle rock of Lifelong Dayshift packed full of pop-hooks and a sense of frailty from Lopez – “I don’t love you and you don’t really love me” he sings on the track’s huge chorus. Terrific stuff.

Prepare to be creeped out. Wait, you’ve read that and seen the name MSTRKRFT! It’s your man from Death From Above 1979 making electronica/dance! What’s weird about that? Loads now. The first minute or so of this is savage, siren-like wails of confusion, that soon melds into a beat that rises, falls and staggers all over the place, descending into a wave of shrieking white-noise chaos, whilst Nation of Ulysses vocalist Ian Svenonius, spouts menacing lyrical tit bits (“Don’t you know I love you? I’ll treat you bad, but you’re all gooooood” he slurs). This is primal, feral, splintering confusion as synths melt beneath this wave of punishing menacing electro-fire.

USA Nails – I Am In A Van (Smalltown America)

Okay, this isn’t a new track as it came out last year on the brilliant No Pleasure by popular beat combo USA Nails, but the video for the scathing I Am In A Van is too good not to share really. Favourite moment is vocalist Steve laying in a catalogue pose (0:48) in front of a chicken coop in Brussels. Difficult to think of a better band than them at the moment really.

Interesting that I mentioned in my review of METZ‘s II about the Drive Like Jehu riffs present and then this collaboration appears. As you would expect the Swami sound infects this like a zombie virus administered to Quicksilver. That guitar tone bounces and runs through this, giving it a proper Hot Snakes vibe, as John Reis and METZ vocalist Alex Edkins both take it in turns sharing vocal duties. Unusually for METZ, there are only sparse moments when this is buried in their sludge-punk noise, as the aforementioned Swami sound takes centre stage. If you wanted your Hot Snakes more noise-rock then you’ve come to the right place – a fine addition to the METZ and Reis arsenal of awesome songs.