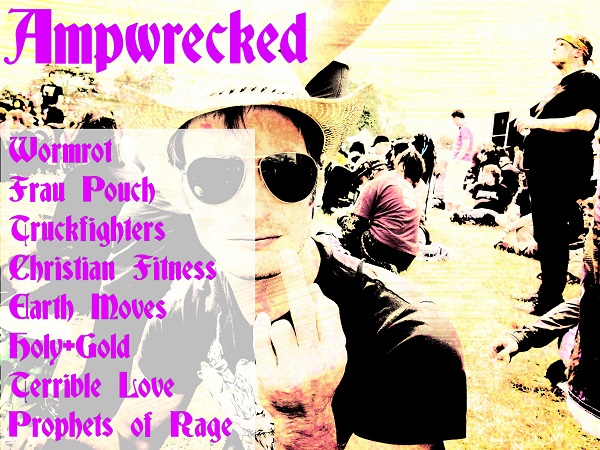 Frills don’t exist in Wormrot‘s world – they’ve torched them in a towering inferno. Back again, (we reviewed Dirge in 2011) with a new stick-man and a new album, Voices – it’s time for the year of the worm! This Singapore three piece have got their hostile and aggressive sounding slab of meaty, direct and damaging grindcore down to a fine art. The first part of Fallen into Disuse chugs along with almost Turnstile-esque hardcore stamping, before the sudden time change (and a blood-curdling scream) as we go full grind-face-melting-mayhem. This thunders along thanks to Rasyid’s turbo-charged riffs and Vijesh’s pounding drums, whilst vocalist Arif switches from this gnashing, high-pitched squeal to phlegm coughing grunts of disgust and revulsion. Awesome and totally brutal grindcore fun times.

I’m not sure how I’d feel if my beard was made of biscuits. Depended on what sort – hobnobs? I’d devour it right off my face in seconds. Frau Pouch describe themselves as “a sci-fi based post-punk-disco band played by a tattoo artist, a guitar tech genius and a nurse” and their music accurately fits this warped, oddball description incredibly well. This 2 minute funk-punk jaunt of stabbing basslines, weird vocal inflections and tales of a man dipping his beard into a cup of tea (until it fell off) is suitably silly and charged with that grizzled, Mclusky-churn of comedic loathing and spittle. Absorb the gloriously silly video of biscuits in a nightclub and watch them zoom into your face forever. Frau Pouch’s debut album, Fairymares drops 25th November – lovely stuff.

Fuzz-kings Truckfighters will release their new album, V, on 30 September – yes. First though, here’s 8 minutes and 22 of bleakness you wouldn’t expect from these shirtless, guitar-throwing riff merchants. Based on a real event surrounding the murder of Lisa Holm; Calm Before The Storm is so-un-Truckfighters in the opening 4 minutes, it’s scary. Then that riff kicks in and it swallows you whole, drenching you in raw fuzz and surprisingly melodic vocals. The video is a harrowing and disturbing piece of cinema, depicting a man (with an bizarre moustache) murdering a girl, but played backwards in one timeline and the build up to the murder in the other. Confused? Watch it. (Be warned, the last 20 seconds are disconcerting.) It caused some controversy on release – full explanation from Truckfighters can be found here.

Christian Fitness – Happiness Is Not For Amateurs (Prescriptions Music)

Fucking hell. There is far, far, FAR too much good in this new Christian Fitness song. Andy Falkous, is back with his one-man band creating more deviant, “permanent evil grin etched in your face forever” tunes that you won’t be able to get enough of. The solemn, almost Shellac-bass and drum thump of this, along with the shrill, squealing guitar, that sounds like Brian Gibson’s strings being hit against a rake, coupled with the sinister spoken word vocal taunting, distorted echo effects and the line: “..and their faces said it all: you are a nation of bastards….” all adds up to this being incredible. Why aren’t you listening to this yet? The third Christian Fitness album drops sometime this week. Apparently. Cheers Falco. x

Anger. Pain. Fear. Aggression. Watercolours? It’s a bit more complex than that. Loud enough in places to make this planet start to crack and splinter apart, Earth Moves know how to tune to heavy. At over 6 and a half minutes, House of Flowers scrambles, hacks and pushes its way through several twisted and exhausting movements – from the post-rock intro, to a scrappy hardcore sway, before exploding forth with a raging, almost apocalyptic-black metal onslaught of screams, frenzied drum smashes and a wall of churning, boiling guitar rips. The last 2 minutes or so, feel very The Chariot-esque (think Cheek) as vocalist Jordan Hills, roars himself hoarse over the sombre, post-metal shift of bleak despondence.

Holy Gold are so dope, seriously. Whilst they’re taking their time releasing their first EP (Feral Children, on 25 November); Gravity should tide over fans for now. This emotive and positive sounding hard rock anthem bristles with energy, enthusiasm and raw power. “Am I to walk the line?/Or just snort it down?” Roars vocalist Keller Harbin, who switches from throaty screams, to fist pumping melody, whilst the rest of the band (made up of ex-The Glass Ocean/Chariot/Norma Jean members) twist, howl, swagger and contort through this Soundgarden-meets-southern metal groove. Outstanding.

We talked a bit about Terrible Love here (solid debut EP that) so it’s good to hear that they’ve been back in the studio. False Flag follows on the heels of the Change Nothing EP and is a cracking slab of melodic hardcore. Giving nods to Touché Amoré, this passionate and brittle slab of raw, emotive punk is agitated, spiky and boisterous. The vocals veer between gruff-bro-hardcore shouts to, that Jeremy Bolm-meets-Departures sounding screams, never straying too long on one or the other, but finding that middle ground perfectly. Stream it now.

Prophets of Rage – The Party’s Over