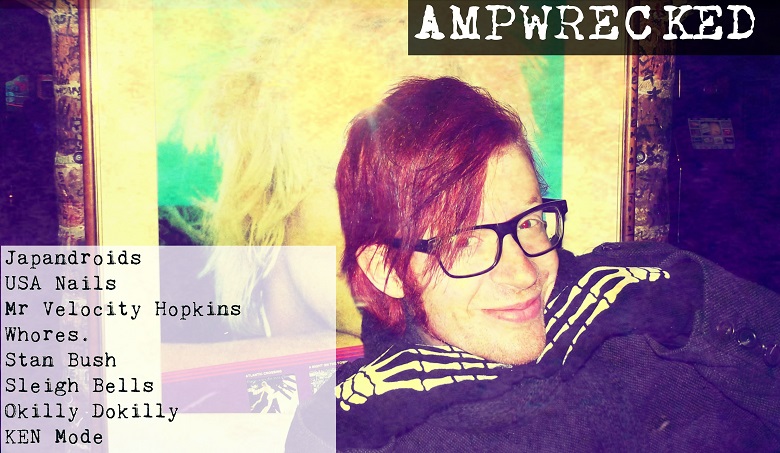 Japandroids: Near To The Wild Heart Of Life (Anti-)

Brimming with burning, zealous joy; Vancouver’s Japandroids punch some hearts with this new title track from their upcoming 2017 album, Near To The Wild Heart Of Life. As David Prowse’s drums build and build, you’re waiting for that explosion of power and it doesn’t disappoint in the slightest. Rivalling Beach Slang for “most-air-punch-worthy-lyrics-ever” – they throw down some serious gauntlets. The chorus erupts with chest-beating passion (“And it got me all fired up, to go far away…” sing both Prowse and guitarist Brian King in unison and the final line, the spirited “I used to be good, but now I’m bad” is a teasing and taunting statement of the true power of this spirited and chaotic duo. Stunning, absolutely stunning.

“I’m fearing no joy” monotones Steve Hodson, the disgruntled larynx that fronts USA Nails. Coming out on Too Pure’s Singles Club, the wonderfully titled Oven Degreaser, Lisa is just over 2 minutes of noisy, agitated kraut-rock debauchery. Stickman Matt Reid is an absolute machine, attacking the drums with such ugly and punishing rage, whilst the dirty, scrawled guitars stab and skewer. “What’s with that face, Grace?” asks Hodson, his sneering disdain painted so wonderfully on this volatile and scrappy blast of scribbled energy.

Yeah, it’s the guy who did Dare! Who did The Touch from the only decent Transformers film! Of course, this is cheesy as fuck but amazing at the same time. Stan Bush knows how to write a killer hook and the over-driven guitar wails, heavy synth-rock blasts of triumph and anthemic status is well and truly solidified in the chorus of:”Warrior! Ready to fight! You’ve got the power, the skill to survive!” How anyone could think this is anything other than amazing is beyond me. Classic.

Just watch this video for the new Whores track, I See You Are Also Wearing A Black T-Shirt (I am as well). Simple, effective, raw power at its finest. The guitar is a scuzzy, hacking cough of filthy disgust alongside the rolling hardcore-punk stick-work. Vocalist Christian Lembach barks his words about “closing in..” and “a hole in ground” whilst this sharp, cutting noise-rock caterwaul barrels forwards, smashing to pieces everything in its way. Whores are absolutely letting loose here, stripped back, crunching, volatile noise that will make your skull rattle and you want to windmill around the room.

My favourite part of this is every time you see (checks Okilly Dokilly Facebook page) Red Ned mash his synth. Also, the only lyrics are: “You only live once, ah hell, give me a white whine spritzer….” As gimmicks go, it’s one they’ve obviously run with and really, really don’t want to let go. Adding synth-led metalcore with a dose of everyone’s favourite left-handed moustached Christian is a splicing of things I never thought I’d see, but there you go.

Sleigh Bells – I Can Only Stare (Lucky Number)

Less bombastic keyboard-screeching and thumping walls of shrill feedback – Sleigh Bells tone it down somewhat on this new single, taken from their upcoming fourth album, Jessica Rabbit. Don’t think though that they’ve lost any of their edge though; I Can Only Stare is a sombre, hand-clap led ditty of warm, sloshing synths, ghostly guitar plucking and Alexis Krauss’s gorgeous vocals. This is showcasing that this noise-pop Brooklyn duo are more than just guitar-burning, leather jacket-strutting badasses – they’ve a softer side and can create some of the emotive and delightful electro-pop of 2016. Cracking.

Fucking. Yes. KEN Mode are the pummelling, destructive force you were warned about. From the snapping, deranged yowls of mouthpiece of guitarist Jesse Matthewson, to his brother Shane’s off-kilter drumming and grinding bass of Scott Hamilton; Let’s Get Divorced thumps along at a thrash-punk pace, filled with snotty, well-placed aggression. Breaking up has never sounded so fierce; rampant and wild with a touch of biting humour thrown in for good measure.