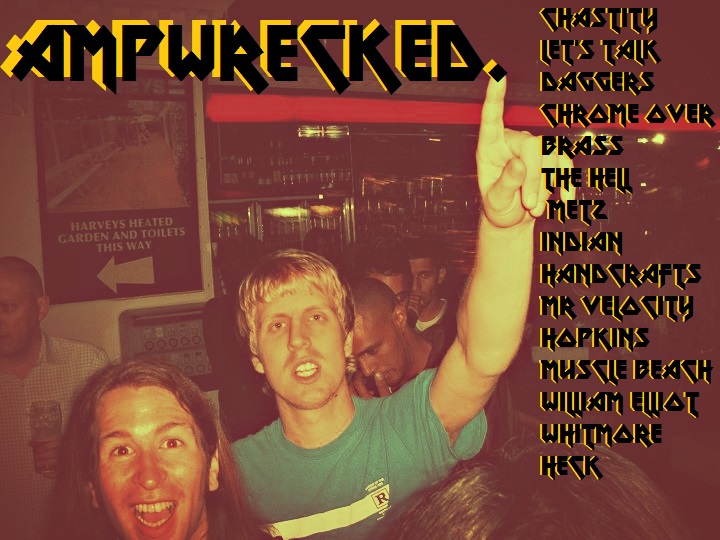 If anyone thought the 2 minute punk rock of Manning Hill, by Brandon Williams’ Chastity wasn’t badass enough, then Saliva should do the job. Giving not a single solitary fuck, this utterly thunders past, scratching, agitated guitars churn razor-sharp riffs over the building drum beats, whilst Williams spits the words”WELL, I CAN’T BE YOUR CONSCIENCE!” with ragged, fiery determination. Purging, heart-racing destruction dished out under a furiously catchy melody – find out how to pre-order TAPE from Hand Drawn Dracula now.

Big fan of Let’s Talk Daggers thanks to the lyrics “Wheelchair, we don’t care, weird hair“. Anyway, Clutchendials is a word I cannot spell or say properly and is proper bonkers/weird in every sense. The erratic time signatures and nonsensical structure, reminiscent of The Blood Brothers, are sandwiched alongside dual-female/male vocal harmonies and agitated, glitch-punk rock splatter that will make you shake your body with a wild fervour. The video is also a second part in a trilogy with an emphasis on mad hallucinogens; something we can ALL get behind. Plus, ping-pong ball eyes. Anyway, it rules hard and is totally deranged. Order A Beautiful Life now through Tangled Talk Records.

Baby God-sorry, HECK are back. Threatened legal action can even make the craziest of beasts pause briefly and restart. Don’t worry, this is still the same total fucking destruction, just under a different name. HECK don’t really play music; rather they rip it apart. The Breakers is them at their wildest, most erratic and unhinged, topped off with a colossal breakdown of bone-crunching proportions, ending in a savage, droning wail of high-end feedback, regret and a desire for more. New name, same punishment. Pre-order The Breakers and other shit at the band called HECK website you chump.

Chrome Over Brass is Alex Garcia-Rivera (he drummed on Give Up The Ghost‘s second and last album, We’re Down ‘Til We’re Underground) laying down layers upon layers of punishing percussion, all backed up by some minimalist bass and guitar tracking. Bear Attack is an 82 second fury of driving, determined prog-punk gusto led entirely by Garcia’s furious footwork and flailing limbs. Instrumental-speedcore that’s flat-out technically brutal and bursting with glorious, breathless energy. Pre-order the self titled album from Deathwish Inc now.

According to a recent Facebook post, there are 31 members in THE HELL; all with proper haircuts I imagine. Still keeping the running joke of being more hardcore than anything else, THE HELL are a bit like Paul Rudd showing that Mac & Me clip all the time. Sick is exactly what you’d expect from THE HELL if you have previous form with listening to this bro-hardcore shuffle. The falsetto bits (reminiscent of 3 Inches of Blood) are an excellent touch, whilst everything else sounds, smells and smashes past like a black Pantera t-shirt with the sleeves torn off. “WE STILL BANG SO HARD, IT MAKES YOUR HEAD FALL OFF!” Great work lads. Pre-order Brutopia here.

“ERASER! ERASER!” screams Alex Edkins from METZ – his voice swamped by monstrous feedback as he bellows through a malfunctioning microphone that’s sitting inside a tin of wasps. Instruments aren’t played; their strangled within an inch of their life, thrown in the air, smashed into each other as this wave of destructive and almost shoegaze, noise-rock slices great chunks off itself, cackling with mouth-frothing horror. If you thought II was a blast, then this single is the perfect, nerve-wrecking follow up. Eraser (along with the b-side Full Auto) will be released through Three One G and Subpop on 22 January 2016.

Dragging the lake for the silt and sludge, it’s Indian Handcrafts. The car-chase boogie image that this throws up is sublime; it’s Queens of the Stone Age back when they were unpredictable and really, really sleazy. It has that hip-shaking sass of Clutch‘s current output, yet is still a burning, boiling churn of 70’s metal-meets-robot rock and why am I not downing a bottle of beer, ready to crack on to the next whilst listening to this? Unbelievably strong, especially the handclaps near the end and the churning riffs that boil and bubble. Get Creeps from Sargent House right now.

Denver’s Muscle Beach are all about the angles and not the flexing. In fact, their a load of triangles pointed towards the squishy fleshy parts you’d rather not be impaled on. Cathartic and barbed, Tiger Lily isn’t a happy song, nor is it particularly calming. Even the opening riff sounds angry; a stop-start staccato of acidic loathing, with a teeth-rattling post-hardcore swirl hammered home over the red-raw screams and disjointed and anxiety-ridden caterwaul. (The only link I have for this is to punknews as their Soundcloud has it as private).

Let’s calm down for a bit. William Elliott Whitmore crafts the kind of smoky, whisky-sodden American-blues that makes you feel like you’re trapped in an episode of Justified. With a voice older than his years; throaty and coarse, Civilizations is striking (and sparse), brings a tear to the eye and warmth to a heart. There’s a lot of hope here and sometimes that’s just what you need. Go to Anti-Records to order Radium Death.