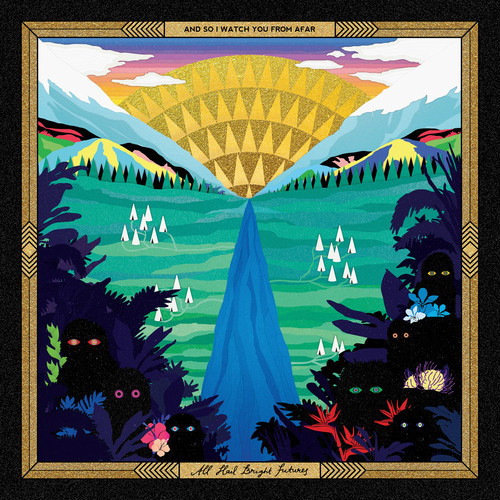 I always wondered how And So I Watch You From Afar were going to follow-up Gangs. It seemed like a daunting an ambitious task to say the least. Gangs is such a breath-taking gut-punch of frenzied, riff-soaked heaviness and positive, hyperactive energy – where do you go next?

Losing founding member Tony Wright was obviously a massive blow in the ASIWYFA camp – the change in band is so obvious, it’s screaming at you in the face, yet it’s the kind of change that has resulted in the band developing their sound down a different path; taking the red pill if you will instead of sticking with the blue. They’ve taken the chance to make something that’s out of their comfort zone – an experiment, an evolutionary step forward with their music. What I’m saying is, this isn’t Gangs Part 2: The Bloodening.

Opener Eunoia is built on trickling, tappy chords that overlap and repeat, increasing in urgency. It sounds like a steady downpour of rain, soaking you to the skin in good vibes and heady, cosmic sounds. Buried, mumbled vocals pepper this 2 minute intro, as does the rhythmic, Gregorian-style chant of “The sun, the sun, the sun is in our eyes…” It’s a taunting and teasing opener and unlike anything they’ve produced on previous albums, showing a fragile and hauntingly melodic side.

Like A Mouse is Fang Island on a sugar high, pumped to the eyeballs on delirium and fizzy pop.

Chords and drums slam together like God clapping his hands on Big Thinks Do Remarkable; which takes the dream-like rush of Eunoia and blasts forward with huge scrawling guitars, rumbling bass and loud, bombastic percussion. It’s an explosion of colour – it’s a kaleidoscope of radiant,Â  incandescent sound – it feels like someone fast-forwarding a looped video tape of a chaotic and brilliant summer break. This song actually SMILES at you and you can’t help but smile back – the familiar chant of “THE SUN, THE SUN, THE SUN IS IN OUR EYES” is now brimming with gusto and good vibes it’s hard not to feel really fucking positive thanks to its infectious and zealous nature.

Like A Mouse is Fang Island on a sugar high, pumped to the eyeballs on delirium and fizzy pop. There are moments on this that reflect the heaviness that appears on Gangs – a huge clattering wall of noisy, destructive hard rock, complete with heavily distorted almost punk-rock riffs and a wonderful build into an embracing breakdown of squealing, euphoric dizziness.

Former label-mates Adebisi Shank have obviously had some influence in And So I Watch You From Afar’s ever-evolving style – Ambulance! is a clear example of this – mashing almost space-rock with dance-punk elements, under squelching synthesisers and twiddling, tappy-emo time signatures. The stuttering, stop-start punctuated spelling out of the song’s title is a particular high-point. There’s even some trumpet thrown-in for good measure, adding yet more expanse and glorious positivity into such a giant encompassing wall of aural textures.

More waves of electronica and glitchy synths take precedent on the trippy and spiralling The Stay Golden Part 1 which builds to a frantic breakdown of blasting brass and huge drum beats and morphs seamlessly into Part 2 (Rats on a Rock), which sounds like Adebisi Shank and Throw Me The Statue jamming together on a Caribbean island. It’s a busy and clustered rush of musical styles clashing together; at times wanting to follow a huge post-rock style breakdown and in others, it excitedly changes tact, opting for huge crushing waves of bright vitality and tropical pop.

The stuttering space-rock of Mend and Make Safe is tappy as hell, driven by Chris Wee’s impressively layered drumming – a concentrated and frantic attack and oddly works alongside the twee-flute loops and robotic-guitar work. Ka Ba Ta Bo Da Ka is a quirky experimental piece, built on spoken-word repetition of the track’s title and is somewhat of a headscratcher and unfortunately one of the weakest tracks on All Hail Bright Futures. Things Amazing is a huge celebration of fireworks, festival floats, costumes, balloons, whistles and whoops of delight and there’s a sense of kinship with the last 30 seconds of the song Lifeproof from Gangs.

Closing track Young Brave Minds sees a welcome return to the old sound from their first 2 albums. It takes to the 2.30 mark to kick in properly; the booming bass chord drives a deep furrow of lurching heaviness, the trumpets once again kick in, sounding fresh and rejuvenating as does the choppy, math-rock guitar wailing, followed closely by the echoing gang-vocal highs. As album closers go, it’s the ostentatious and lavish conclusion to an album that bleeds idiosyncratic styles and eccentric sounds. A possible fanbase divider, but based on the strength and positivity that the majority of these songs were received when I saw them perform a few days ago, All Hail Bright Futures is a complete joy to experience and absorb.

And So I Watch You From Afar
Sargent House