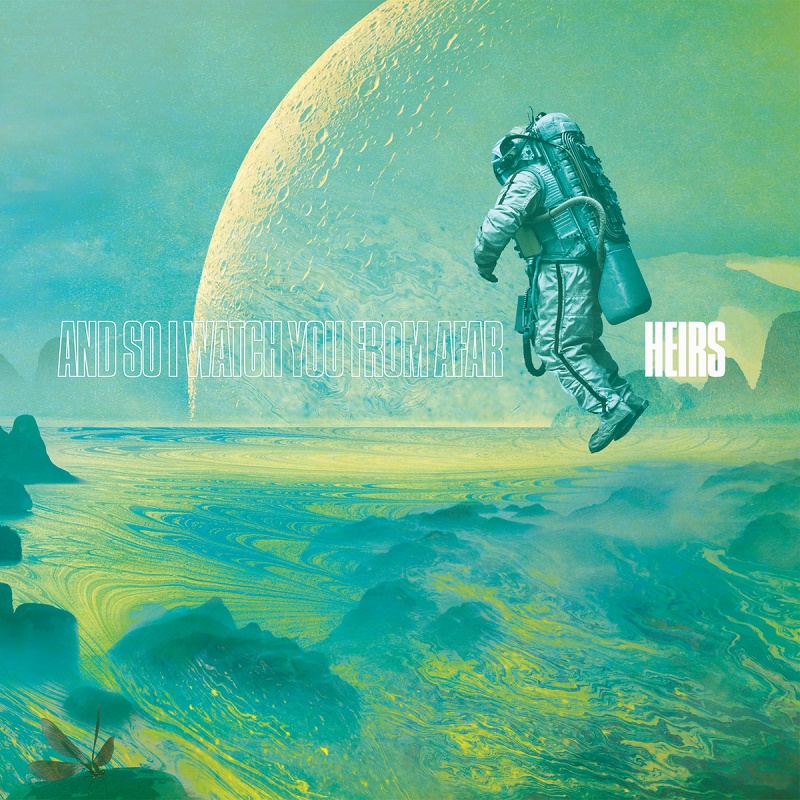 Band: And So I Watch You From Afar
Album: Heirs
Label: Sargent House
Release date: May 2015
Sounds like: Being redesigned a million times. Fang Island on the right drugs. Space molluscs.

This is bound to divide opinion…again. Those who were left scratching their heads after All Hail Bright Futures are in for more surprises. Belfast’s And So I Watch You From Afar‘s departure from the sound that made their debut such a raucous and pulverising storm of noise (and the juggernaut party-smasher follow up that was Gangs), will continue to shock those die-hard fans. I do understand the need for change (I know about the cheese and moving it) but change in the right direction? I remember the only vocal contribution on Gangs being a “WHOO!” at the start of the record. That was it.

There’s one thing they’ll never shake or change though and that’s their unrelenting positivity. Much like former label mates Adebisi Shank, And So I Watch You From Afar are all about the good times and channelling that zealous joy through their instruments and into your awaiting ears. Heirs is in every single way a record that will make your heart swell; from the blistering frenzy of opening track Run Home to the pummelling air-drumming you’ll be doing to A Beacon, A Compass, An Anchor, you’ll never feel sad, but emotions will be high when you’re listening to Heirs, trust me.

Forcing-feeding a kaleidoscope of pure energy is on the cards as the aforementioned Run Home, opens Heirs with flamboyant grace and razor-sharp guitars that swirl, churn and snap at each other like a bag full of seething snakes. Credit to guitarists Rory Friers and Niall Kennedy – the layers of complex riffs and bright-patterns carved out by their six-strings is a pulse-racing blast. Around the 1:50-ish mark, the band pause to reflect with a sombre, breathing space before launching back into the post-rock dance party extravaganza. The lyrically-heavy shred of second track These Secret Kings I Know, erupts forth in a flurry of post-punk exuberance, multi-layered gang-vocals and some heavy nods to the guitar-wailing theatrics present on their second album, Gangs. It’s Fun, with a huge fucking capital ‘F’ and they know it. This is where  the bands’ use of vocals really, really does work. They’re slightly muted beneath the churning bass and electric-pink guitar attack and crashing drums, in a similar way Steve Brooks from Torche elects to bury his vocals beneath the music.

Heirs is packed with vibrant optimism and is a sonic-assault of Fang Island -“let’s hug everyone at once” boundless energy and elation..

Initially Wasps left me cold and indifferent – it sounds like a introduction track that doesn’t go anywhere. Modest in length (clocking in at 2:40) I re-evaluated my initial thoughts and its spirited evolution of prog-rock styles, mixed with ethereal vocal wails and a crunching rhythm section that threatens to spiral dangerously out of control, before being brought back from the brink hit me and it suddenly made sense! I also didn’t realise how heavy it is – retaining the sonic-levels from their debut, this is And So I Watch You From Afar grinning back at you at the realisation that they’re referencing past glories.

Not sure if the line in Redesigned A Million Times is “RAISE YOUR HANDS, REJOICE!” but I hope it is.  This is where And So I Watch You From Afar hit the euphoric button – the twinkling, cascade of computer game code, gang-vocal chanting, cow-bell bleats, squealing riffs and zealous pop-meets-prog rock zealousness is simply divine. It bounces along an unsteady path of punk rock happiness, mixed with their overtly technical and masterful riffage and I’m sure it’s one that will go down an absolute storm on the live circuit. People Not Sleeping is a stuttering, fractured number that refuses to sit still; liberal use of scattered feedback, strained strings, mangled-chords litters this in places, whilst what I assume is a chorus is a thundering slab of noise-rock pummelling and muted, sinister vocal murmurings.

It takes a moment for A Beacon, A Compass, An Anchor to get going, but when it does…oh boy. The initial fade in is a mixture of looping noise and morose guitar chords that build and build. It feels like something that was cut from The Letters EP – similar pacing; going through a slower, progressive build through Chris Wee’s fantastic and concise drumming, scattered, breakdowns and a roaring stamp of up-tempo metallic rock in a similar vein to S is for Salamander, slowing right down at the end and fading out into that looping, scratching noise that it began with.

Delirium and peak clenched fists/gritted teeth is reached on the ridiculously ornate noodling that is Animal Ghosts. From the trippy, overlapping guitar theatrics, to the split-second bursts of dazzling colour and the marching-band drumbeats, things gets even weirder when the trumpets rain a glittering shower of brass-fuelled rapture. Just what is going on?  Heirs concludes with the atmospheric haze of Tryer, You – a glorious spaced-out miasma of dripping synth-lines and a soaring wail of near psychedelic, prog-rock beauty.

Fingers crossed fans of And So I Watch You From Afar ‘get’ Heirs and the direction they’re taking – it all makes sense. Heirs is packed with vibrant optimism and is a sonic-assault of Fang Island’s“let’s hug everyone at once” boundless energy and elation. Anyone still missing Adebisi Shank or Dananananaykroyd should have this in their collection to fill the void, no question.

The artwork is also utterly, utterly gorgeous – where can I get a print?

And So I Watch You From A Far
Sargent House