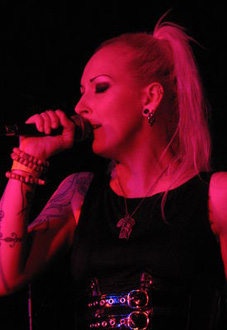 After seeing such a strange crowd response at The Locust gig last month, I was wondering if a new “trend” was emerging where you just stand and stare at the band like a hypnotised ferret until it is all over. However all of this left me as we entered The Electrowerkz in London.

As this is a electronic/industrial music hotspot everybody was dressed to the eyeballs in all the right gear, from the Cyberdog clothing, to the UV glowing welders goggles. Of course I was dressed for the part, equipped with my glow sticks, ready for a good night’s dancing! First up were Gothic Electronica duo Ego Likeness. After a vast amount of thick smoke poured from the stage that would have choked the cockroaches in the sewers below, EL sliced through this with a eerie ‘Evening London!‘ and then followed by firing in some dark and heavy Electronic beats.

Rather then having more Ibiza thumps then was needed to knock down a building, Donna Lynch used her beautiful voice with Steven Archer’s riff-tastic guitar to give a fine tuned and well performed 30 mins; cEvin Key would have loved it!

It was fantastic performance and we just couldn’t stop dancing! They received a positive reaction from the crowd as well as myself and I wished Ego Likeness could have played that little bit longer!

The problem was that this was the first gig in about 5 years where I haven’t taken a camera, so this is a first and the last time that Keep It Fast will be using live pictures from another source (if you click on the pictures it thanks the correct person for taken them!)

As soon as EL stepped off the stage, the crowd were getting very excited for the next support act. electro industrial Canadians Ayira. Not knowing about this band myself I was feeling the excitement and anticipation from the assembled cyberpunks. Even though the 4 piece had all the right gear, (even a nice set of electric drums on pink scaffolding) the energy seemed to dissipate and they didn’t grab my attention compared to the previous act. I took the time this time to meet Steve Archer and agreed to do a interview, which will be up very shortly!

As the dust settled from the crowd dancing for all they were worth, Angelspit quickly appeared from yet more stage smoke.

This industrial electro duo where completely in the right place, dressed in their pvc cyberpunk gear and was greeted by much cheering and swinging glow sticks to boot!

They cut to the chase and got down to business, biting into the microphones Atari Teenage Riot style-shouting, which rippled neatly into their programmed beats and guitars. The impact was intense with everybody showing off their bizarre moves – twisting their bodies into a variety of shapes.

As destroyx melted and twisted her vocals into one of the many LED flashing computerised objects on the stage, Zoog got his hands on (or near) the almighty theremin! Now everybody has heard them on pre-recorded tracks, but it does take skill to make it sound good and Zoog has the power. Mixed in with the hydraulic timing, the thumping beats he produced erupted from the speakers, like some b-movie noiseexplosion.

But then disaster struck! were watching. But Angelspit improvised whilst trying to fix the machine by using groin tactics to set the theremin off and simply stated:

“This is a fuck up and has never happened before!”

Before anybody had a chance to wonder what would happen next they sprung back into life! With such live performances as “100 percent” and “Vena Cava” which really did make the crowd go wild, these were a team that love their music with a burning passion and deserve to show their creative exploits to the world.

As they left and the dust once again settled, they chilled out and met the crowd. The Electrowerkz just seemed to get started as more people began to appear, and important signs such as “will not serve alcohol after 5am“…. 5am?!?! Surely you might as well just be 24hr!

Angelspit are still touring and are coming back to England very shortly for a couple more shows. Click here to find out more!

Also Keep It Fast have interviewed Zoog in the past which you can read by clicking here!