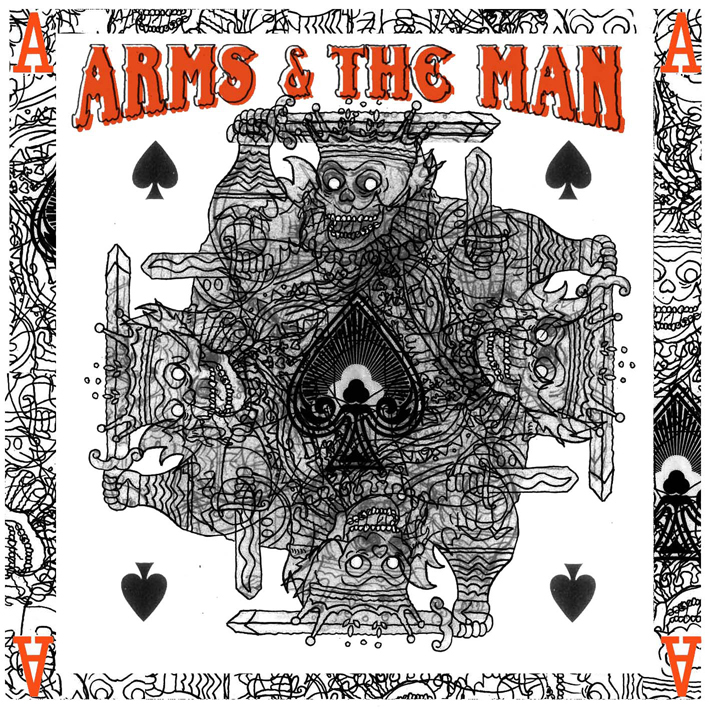 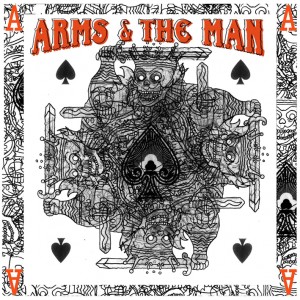 Chances are those of you familiar with the Beds and Herts circuit will know who Arms & The Man are or at the very least seen them demolishing your local pub/house/respectable music venue. If not, you’ve probably been living under a rock, yeah?

You know how Pulled Apart By Horses sound like one big epic party train; all high fives, stage dives? Arms & The Man take that template, smash it to pieces, burn the ashes and build a party fortress on the smouldering remains. Despite the somewhat cavalier attitude as displayed in their press release, it’s clear that this EP is something that all five members have poured a lot of time and effort into creating. Yet, the three songs present on this self-titled effort are so cocksure, so laden with swagger and Henry Winkler thumbs-up, finger-gun coolness, it’s difficult to wipe the massive grin that will slowly spread across your face as the tracks burrow their way into your subconscious.

It’s a sum of many parts; bordering styles clashing together to create some kind of unholy raucous rock n roll destruction machine. First track, Guitarmageddon is straight out of the Gutter Phenomenon-era Every Time I Die rulebook. From the fairly dense opening bombardment of the taunt bass and drum crash, coupled with the sturdy, grinding guitar lines, the vocals punch through the mix like a rasping drunkard, hollering for his next fix. As quickly as it begins, everything is shifted up a gear to a lurching and somewhat stocky clunk of filthy stoner rock as the vocals dip from enraged screams, to moments of sporadic melody and then back to a Matt Caughthran-style bark. Arms & The Man embrace a “fuck it, let’s party” attitude and seem to try and jam as many fist-in-the-air choruses as possible.

This EP is basically a taunt an arrogant, goading sneer at other bands and you can tell Arms & The Man are loving every minute of it. “So I read the blog about your band man, and it appears to me, you would kill for the fucking swagger that we’ve got” roars vocalist Ben Davies, high on his own giddy boastfulness and especially so when he screams “HAS YOUR BAND GOT ANY RIFFS?” and is greeted with a resounding “NO!” from the rest of the A&TM boys. It’s fantastically egotistical and supremely awesome. The finishing breakdown and cry of “DANCE MOTHER-FUCKERS, DANCE MOTHER FUCKERS COME ON!” is a resounding slab of pure groove-metal beatdown.

Riffalanche twists and turns with such chaotic precision; yet despite its raw heaviness, it still sounds like the most fun in the world. Like Kvelertak, they’ve created metal that makes you want to embrace people instead of punch them. A combination of bro-core high-fives, with a hilarious poser attitude that oozes confidence from every riff, every drum beat, every time a proud line is spat, you just want to grab the nearest person in a bear hug and force them to jump around on the spot until they can’t feel their own legs and are grinning as wide as you are.

Stay Down, Hitchin is Fu Manchu-meets The Bronx, swinging from a slick stoner groove to barbed punk rock rasps. “WE MAKE MUSIC, FROM THE HEART AND SOUL!” screams Davies and you can tell the boy means it. There’s a touch of Baroness-riffage in the way the track kicks into a higher gear, sliding into a filthier southern-rock vibe.

So much confidence bleeds from Arms & The Man; it’s scary. It’s as if they’ve smoked a load of weed made out of Jeff Winger’s hair and ingested his “Its clear from looking at me, that I am awesome” attitude but the thing is, they can pull it off. Why? Because their music speaks it in volumes, through the impenetrable breeze-block thick grooves, through to the punk-meets-hardcore swagger, Swami-guitar licks and that ever-so-noticeable aroma of desert rock; Arms & The Man have earned the right to be this cocky, because not only have they got the attitude; they’ve got the tunes to back it up and it’s not only refreshing, but essential.