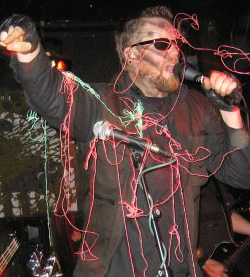 Considering I’d been waiting for this for a good 2 years, I wasn’t actually that excited until I got to the venue and attempted a mid-air handshake/arm wrestle with Holzfeuer (lead singer of Arnocorps) – fucking win. They must be the nicest band ever. I swear to god, they spent most of their rehearsal time talking to fans, shouting the words “GOOOOOOO!” getting photos taken, calling people “godamn heroes!” and drinking. Anyway…THE GIG: I caught the tail-end of Dagobah’s set, which was unfortunate as they sounded pretty good. A Skate-punk, thrashfest that I wouldn’t have minded hearing more of in the future. Unfortunately the next support band, Thirteen Wolves, I could have done without. It was a bit like watching that ‘band’ who cover all the songs on Guitar Hero. Except it wasn’t like Guitar Hero where you fuck-up the ‘Sweet Child Of Mine’ solo, turn the console off and play Gears of War instead – you carry on, trying vainly to keep in time before your fingers fall off and you end up planting the over-sized controller in the tv screen. I’ve never been so bored in my entire life at a gig (well, save for watching The Kits or this awful death metal band I had to endure at Esquires once. *Shudders*) It was a cock-rock horrorshow that I could have done without really – so bad in fact my friend tried to fit her fist in her mouth at the title of one of their tracks, which I think was some garbled nonsense about a wizard. Normally, comedy-Warhammer-lite shenanigans would be up my street, but really….no…..just no. Plus, they kept pronouncing Arnocorps wrong. (‘Arno-core’ for those uninitiated) There was a big cheer from the back of the room when they announced their last song – thank fuck. Possibly the worst band I’ve seen this year. As the opening bars to Little Richard’s ‘Long Tall Sally’ kicked in, a great cheer rose up from the audience, proving that 1950’s rock ‘n’ roll is still popular with the kids (considering it was featured in the opening scenes of sci-fi action horror Predator.) As the closing bars tell us to “have some fun tonight,” the band everyone has been waiting for troop on to the stage – Arnocorps are here.

Sadly, itâ€™s a disappointing start. What should have been a glorious action adventure rock ‘nâ€™ roll fest was hampered by the terrible attitude of some over-zealous fanboys whoâ€™d probably had one too many beerskis and had been watching tales of heroic action the previous night. Get the fuck off the stage you epic twunts and let the band play. Do you actually think I want to see you hurling your sweaty forms into the crowd, possibly braining me with your oversized feet as you thrash about like an epileptic on fire? No, I donâ€™t. Suffice to say, ‘Predatorâ€™ was nearly ruined due to this, however itâ€™s kept together by vocalist Holzfeuerâ€™s display of crowd safety and terrific showmanship in keeping things in check. I probably sound like a miserable old bastard for saying this really. I know you should have fun at a show, but really there should be a line drawn between ‘having a laughâ€™ and ‘being a world-class cockend.â€™ I have to say though, the sight of everyone singing back the lines â€œwhat happened Dillon? You used to be someone, I could trust? TRUST!â€Â was particularly heart-warming.

Some may say that Arnocorps are a slight one-trick pony. Sure, most of their songs follow along the similar pattern, but what they lack in variety they make up for in volume and on-stage banter, spliced with their film-heavy lyrics and reckless attitude. They plow through their most well known songs to start wit. ‘Terminatorâ€™ is greeted with rapturous applause; the steady drum and bass build up erupts into the well known chant of â€œNice night, for a walk? Nothing, clean right?â€Â Soon all decorum is lost as the Dublin Castle turns into a whirlwind frenzy of air-punches and Schwarzenegger quotes. ‘Commandoâ€™ goes down well with Holzfeuer asking the audience what they had for breakfast (the answer is always ‘Green Beretsâ€™.) ‘Collateral Damageâ€™ is run through flawlessly and is possibly my favourite track of the whole evening â€â€œ pure, adrenalin filled punk rock with a sooth-as-silk bassline and a terrific vocal chant at the end.

â€œOnly sing this song if you believe it about yourselfâ€Â Holzfeuer says. He shouldnâ€™t be worried though, everyone in the room is hanging off his every word and the cry of â€œIâ€™m Ballsy! Iâ€™m a stud! I donâ€™t take shit from everyone!â€Â is echoed back at the giant Florida/Austrian with gusto. â€œThis is a goddamn, anthem of our generationâ€Â he bellows and thereâ€™s no disagreeing with him, or the band on that one. During ‘True Liesâ€™ they pull several troops on to the stage to act as the ‘Arno-chorusâ€™, an act that is later repeated during the ‘this song will never endâ€™ saga of ‘Running Manâ€™(everyone and I mean everyone, is encouraged to run on the spot), which had bassist Toten Adler crowd surfing on a guitar case â€â€œ a prospect that was both amazing and slightly worrying at the same time, especially his near head-plant from the make-shift surfboard. Once again though, several chumps ruin certain moments by yelling incomprehensibly down the microphone, only to be ejected from the stage by the man-mountain of singer. At this point, the stage invasion is getting incredibly tiresome, but the band battle on with a rousing rendition of ‘End of Daysâ€™, possibly dedicated to all the choir boys and to all the goddamn heroes out there, ‘Last Action Heroâ€™ delivers the upper-cut of uniting everyone in a frenzy of bonding, unity and brotherhood under the Arnocorps banner of valour and bravery.

Other set pieces, aside from chucking people off the stage include drummer Gellend Adlerâ€™s drum solo and wet t-shit competition (heâ€™s undefeated, even again the rather striking young lady who took up the courage to challenge the power-house stickman.) They even manage to run through several new tracks (‘Kindergarten Copâ€™, ‘Red Heatâ€™ and another about us Brits that I canâ€™t remember the name of, but damn it was mighty fine.) The ending though, is disappointing. Instead of a thrilling version of ‘Total Recallâ€™ they play ‘Eraserâ€™ perhaps the weakest track on the album. Promising to “mix up their set” for the rest of their tour, Arnocorps exit, from what has been a night full of mixed emotions â€â€œ some good, some bad but on the whole, ballsy to the max.