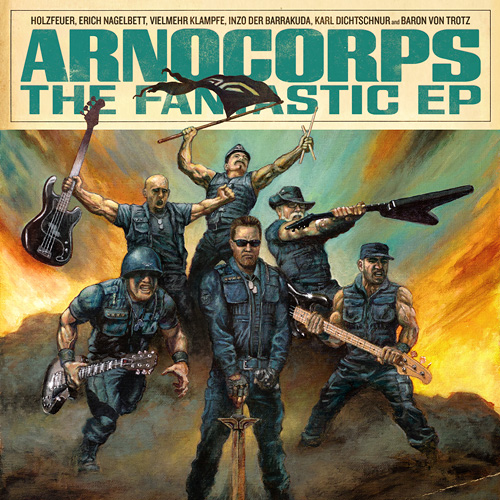 Saviours of rock ‘n roll action adventure return! Arnocorps are back (with a slightly modified line-up and a return of the heroic symmetry) with their first ‘sort-of-full-length’ release in 4 years (hey, that iron isn’t going to pump itself) and it’s great to have them back. Funded through a kickstarter campaign, The Fantastic EP reached triple it’s intended budget, which is…well, fantastic really!

Whilst The Ballsy EP focused predominantly on killer robots, Russia and a Kindergarten teacher, The Fantastic EP celebrates the sword-swinging, dragon-slaying, enemy-crushing escapades of the Hyborian AgeÂ  – alright! The enthusiasm and bombastic showmanship of Arnocorps remains the same as their previous release. EP opener, The Fantastic Intro, is extravagant and ostentatious – think a weird hybrid of Boston meets Rush (the opening bars give a nod to Boston’s Foreplay) with militant drumbeats and vocalist Holzfeuer demanding you listen to Arnocorps and their tales of adventure.

Conan The Destroyer is an absolute beast of a song – it channels the pure, vibrant energy of action adventure rock ‘n roll perfectly.

Crom (Strong On His Mountain), is a re-boot of the version that appeared on their debut, The Great Band Of All Time – and is all the better for it. The production is chunkier, full of meat, bone and muscle and as thick as a huge slab of goddamn iron. The guitars are crisp and buzzing with howling energy. Holzfeuer pours every ounce of his large-ham passion into the air-punch stabs of the chorus: “crush your enemies, see them driven before you, hear the lamentation of their women!” and it’s utterly ferocious and driven with righteous zeal. There’s no doubt that Crom is goddamn strong on his mountain.

Conan The Destroyer is an absolute beast of a song – it channels the pure, vibrant energy of action adventure rock ‘n roll perfectly. Holzfeuer’s bellow of “I WILL FIND A WAY! LIFE! FOR VALERIA!” is a swords-hitting-against-shields battle cry of determination, under the hail of metallic riffage, that gives a nod to Kvelertak‘s oddball punk-meets-metal sound.

King Conan (Crown Of Iron) is another furious, battle-metal assault and a future live favourite. The backing vocal chants of “GGOOOO!” and the gang-vocal chorus “I! AM! KING!” are a rabble-rousing call to arms and the tempo change at the end is bone-crushingly heavy, with a prog-rock edge. There’s a distinct pirate-gait to the bear-wrestling stamp of fifth track, Hercules;Â  a jaunty, swash-buckler as the life of the son of Zeus is immortalised in song. Credit to guitarists Vielmehr Klampfe and Erich Nagelbett for their impressive guitar-work, which showcases new depths to Arnocorps sound – from the howling shrill they create during the breakdown, to the elaborate power-metal solo, which spirals and twists under the powerful and tight drumming of Baron Von Trotz. Red Sonja is Arnocorps attempting an epic ballad in their own style. It’s still loud and raucous; Holzfeuer bellowing for Sonja to accept his help in battle, whilst the liberal use of acoustic guitars adds new dimensions to the Arncorps sound as does the sorrowful, bass-only outro.

The iron-pumping charge of final track Exactly, sets the Arnocorps train back on track – smoking stogies, throwing boulders, crafting weaponry and the wheel of pain – it’s the partner in crime to 2009’s I’m Ballsy and it closes The Fantastic EP in a suitably epic fashion. From the thundering bass ‘n drum intro, it barely lets up;Â  storming forward with over-charged Misfits-style punk rock exuberance. “WHAT DOESN’T KILL YOU MAKES YOU STRONGER!” roars Holzfeuer – Exactly.

In short, The Fantastic EP is Arnocorps charging on all cylinders and features some of their best songs (Conan the Destroyer, King Conan and Exactly in particular, are simply sublime). This is a band that fully embraces their rock ‘n roll lifestyle and their enthusiasm, not to mention dedication to music is so goddamn ballsy. Be a hero and get hold of this right now so you can be strong on your own mountain.