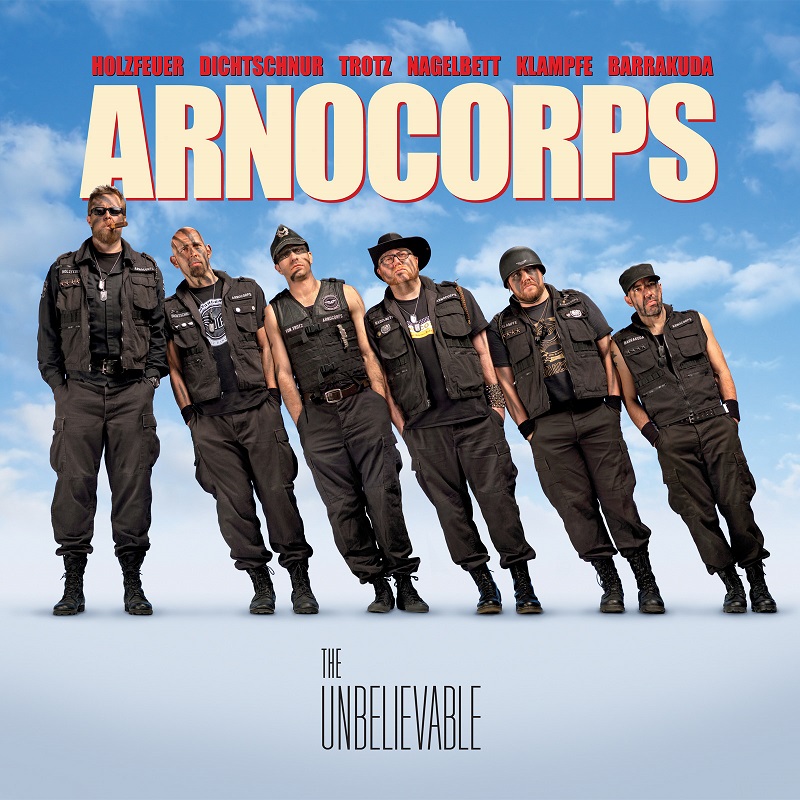 The Greatest Band Of All Time still remains the most factually correct album title in existence. Yes, those Austrian-American rock ‘n roll action pioneers, Arnocorps are back in new EP form, Unbelievable, right? WRONG! TOTALLY BELIEVABLE, EXACTLY! Riding high on the strength of the Ballsy EP from 2009 and the rather fantastic, er…Fantastic! EP in 2013, which told of dragon-destroying, scything-swords and being strong on mountains – The Unbelievable EP is jam-packed with more goddamn ballsy rock ‘n roll than you can pump an iron at! We’re still in heroic symmetry mode (dual bassists ahoy!) and still led by the implacable Holzfeuer, the man, the myth, the goddamn legend.

These 6 new heroic tales from Arncorps history explode from this EP like a Predator vaporizing itself in a jungle – starting with the iron-pumping tease of the intro track and the bellowing cry of “TONIGHT! HELL! FREEZES! OVER!” as we’re launched headfirst into the bombastic and taunt attack of second track, Mr Freeze. This absolutely fist-pumping party-metal anthem might have a chilly tone, but it rages with crackling energy and zealousness – from the brilliant refrain “The iceman coming, I’m the ruler / You’re not sending me back to the cooler!” Arnocorps absolutely know first hand about how to kick some ice. The melodic punk of Junior might be the only track you’ll hear this year with someone pretending to give birth on it. The riffs are fuzzy-as-hell(think a poppier version of Truckfighters) on this cymbal-led rush of creating life as the epic chorus of “If I had a boy! His name will be Junior! If I had a girl! Her name will Junior!” roars past, not to mention the frantic blast-beat drumming during the epic and tense coda – incredible use of a music box at the end as well.

The shrill pierce of a bell ringing means only one thing – it’s back to school for these Austrian-American heroes. Kindergarten Cop bristles with southern-rock swagger, some excellent backing vocal chants (“reading, writing arithmetic/too much homework makes me sick!“) as the tale of an undercover cop catching a fugitive is spliced with having to be both a party pooper and looking after a ferret. It also wouldn’t be an Arnocorps song without a trademark scream of “GOOOOOOOOOO!” which we get during the climatic and increasingly tense post-hardcore breakdown and Holzfeuer’s bellowing war-cry of “TIME FOR YOU TO GO TO HEEEEELLLLL!!!”

The greatest Christmas song has finally been recorded in the form of Jingle All The Way – “don’t forget, you’re my number one customer!” exclaims Holzfeuer at the start of this turbo-man charged punk rock thrash-attack; which is strengthened not only the reindeer-name-chanting chorus and the spirit-lifting, rousing bar-room brawl of “NOW IT IS TURBO TIME! YOU CAN ALWAYS COUNT ON ME!” – a gang-vocal party time of delight. This is a circle-pit anthem of cigar-chewing, fake-Santa-punching, joyful noise, delivered in the traditional Arnocorps way – fast, loud and epic to boot.

The western gait of the superb Handsome Stranger is the best Kvelertak song not written by Kvelertak. Acoustic guitars played at twice the speed they should? Check. A lengthy, hard-rocking-esque intro? Check. Flamboyant and extravagant blasts of cock-rock energy, bravado all delivered in a heavy accentuated tongue? Check. With whinnying horses, a galloping beat and a killer chorus, this smacks so much of the Norwegian metallic-rock ‘n rollers, it’s incredible and just as triumphant. No doubt after hearing the 3 minute skate punk blast of final track, Twins, you’ll be singing the brilliant chorus of “tonight is your night bro!” whilst chugging a beer and leaping around like a lunatic. “We won’t be alone anymore! We can be a family!” states Holzfeuer, cementing not only the bond of Julius and Vincent, but also of the Arnocorps family and all of their fans.

With The Unbelievable EP, Arncorps sound like they’re having more fun than any other band in existence. The songs are ridiculously extravagant, as are the hooks and every goddamn chorus is so instantly memorable, which just goes to show what truly heroic craftsman this sextet are. Good luck removing any of these tales of ballsy folklore from your brain – incredible doesn’t describe it – unbelievable just might. Get on this before hell freezes over.