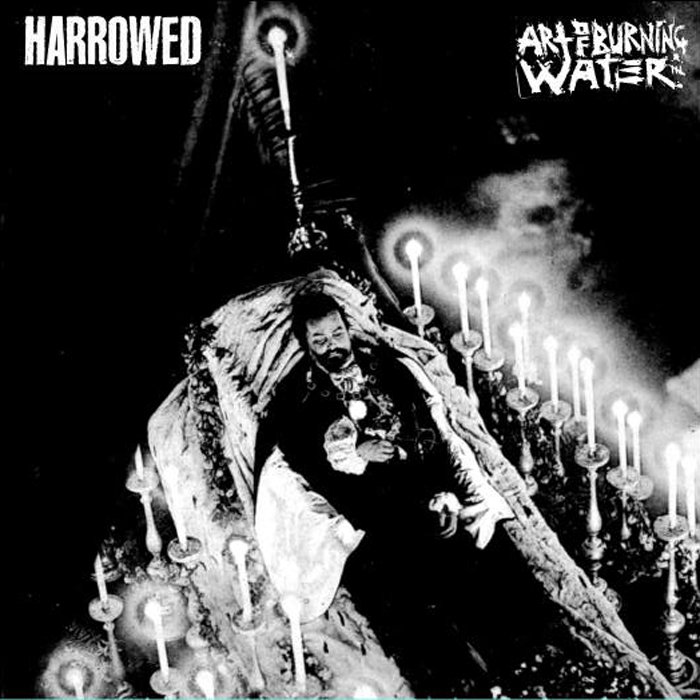 That’s pretty bleak, I hope there were canapés at the wake. From the sludge-coated depths of the underworld and Super Fi Records, two bands stumble into the light. Actually, that should read, pollute the light with their all encompassing and rasping darkness.

Harrowed are a three piece from Kent and contribute two tracks to this nifty little Split EP. The first, Twenty Ten – let’s rip with crisp, scowling guitar riffs, turbo-blast beat drumming, fronted by a mouthpiece that spits with acidic disgust. There’s some nice breakdowns on this, as it bludgeons through with this battering ram force, similar to Converge‘s devouring hate of Concubine. Confined follows this at similar arm-flailing speed, the vocals snap back and forth with schizophrenic lust, as Harrowed’s hardcore-thrash punk slices past with the cleansing power of an out-of-control threshing machine of fun. It snarls and shrieks through a haze of brutal and purging honesty. Two fucking thumbs up lads.

We move on to the rainbow happy sunshine of Art of Burning Water. I’m lying of course, because AOBW utterly nullify anything considered to be cheerful or raise a smile. Their fusion of crust-grind-hardcore wallows in the mires of the damned and the dying. Guitars are detuned to scuzz on Let Me Let You Finish, as a larynx opens rip with such gargling vitriol, it actually makes me feel slightly hoarse – furious, guttural, thrashing-grind destruction. Things go all black metal on the volatile disorientation of the sludgy If I Knew Now What I Knew Then – trippy and utterly toxic. The likes of the dooming-crunch of Cholo howl and belch with chewing, lacerating fervour and the vocals stagger back through the hell dimension, spewing a frothing, blood-slicked gurgle whilst the entire Seth Putnam back catalogue is forced through lawnmower in the background.

A cracking little EP by two bands who properly clash horns – Art of Burning Water and Harrowed serve up a treat in the form of their brands of blackened-metal grind and sludge-hardcore noise. Another solid release from Super Fi Records, who seem to constantly churn out the very best in underground metallic-noise chaos.

You can listen to Let Me Let You Finish By Art of Burning Water on the player below.