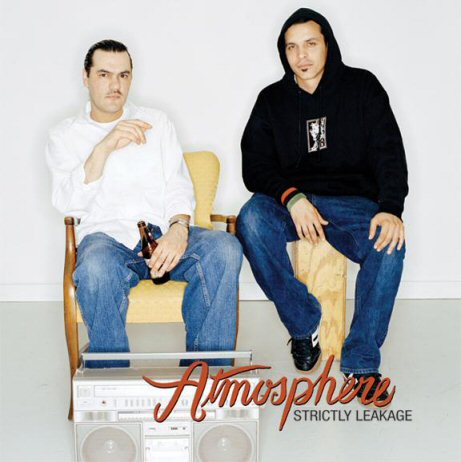 Band – Atmosphere
Album – Strictly Leakage
Release – December 2007 (or whenever you decide to download it!)
Sounds like – image the ‘Twist and Shout’ scene in Ferris Bueller’s Day Off, crossed with something from ‘You Got Served.’ Yeah, that. (Actually, that sounds really wrong.)

For me, Atmosphere have always come across as a very morose and pessimistic act. Beneath their layers of sampled beats, tripped-out keyboard loops and confrontational attitude exists a wholly negative attitude that stems from the deeply personal lyrics of vocalist Slug (Sean Daley.) Emo-rap? Nope; Atmosphere speak about more conscious and social issues through their music – sure, they reference the fairer sex quite frequently, but they take into account other issues such as religion, war and politics (even though these influences may not be that clear to begin with, they still exist.)

“Strictly Leakage‘ is a free-self release by the band for their fans to help them blow away the winter “doldrums‘ (their exact words) with the emphasis on making a record that is more party-orientated, and one that shies away slightly from their original sound. However, it still maintains heavy doses of sarcasm and bitterness, but at a more subtle level.

On ‘Little Math You‘ Slug exposes my lack of hip hop knowledge almost immediately, stating quite plainly, “they no nothing about hip hop, suburban fucks…” (cheers dude) – although it soon becomes clear that the listener isn’t the one being berrated, but a young chap named Matthew (geddit?) who Slug builds up as some big rap star, before tearing the poor kid down with quick-fire lyrical diatribe.

‘Things That Hate Us‘ references alcoholism immediately with the line “this is for those who drink malt liquor, put the poison in your body just to pass out quicker,” before launching into a tirade about the heart-attack capabilities of McScummo’s foods, unprotected sex, using dirty needles – you name it…if it’s evil and corrupt, Atmosphere pretty much have it covered in about 2 minutes and 55 seconds.
‘Get It To Get Her‘ draws elements of old-school funk, complete with the looped brass backing and sporadic bass notes that intertwine well with Slug’s quick fire rap, giving the whole thing a kind of mutated Red Hot Chilli Peppers (no, come back!!!!!!!) meets Spank Rock. Sort of. Ah, fuck it I don’t know; it just sounds damn good, ok??

‘Domestic Dog‘ talks about picking up women at supermarkets as opposed to at bars, with both the title and lyrical content drawing away from Atmosphere’s social commentary vibe – opting for a more ‘comedy’ soundtrack, which unfortunately, falls slightly flat – but the Goldie Lookin’ Chain fans will love it.

Those of you that crave mad ‘scratchin’ skillz’ will fall in love with the first minute of ‘The Old Style‘, which destroys all the weak-ass DJ moves as featured in “every nu-metal band from 2001” in one foul Monty Python sized foot.

Closing track ‘Roads to Ritches‘ strongly reminds me of punk/rap crossover supergroup Transplants (not in vocals, thank god but in instrumentation) right down to the over-used piano loops, gangland ‘whooohhooaaaas’ in the background and the deliciously infectious drumbeat (once again, DJ Plain Bill provides some epic scratch work, nice!)

All in all, this is a competent release from the duo, that shows off their relentless music creating nature, (Atmosphere must be one of the most prolific hip hop artists; except for 2Pac who, has still released more records than anyone else in the world – proving that not even death can stop the party) as well as their ability to pen really strong tracks and excellent beats. Recommended listening, plus it’s free so there’s no real excuse, unless you hate this genre.