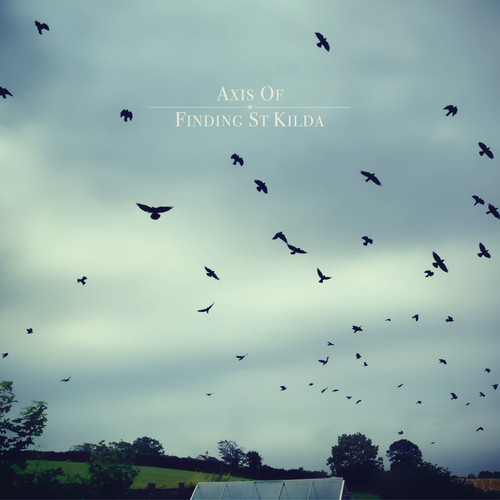 Keeping with a continuing theme of Irish bands being awesome, Portstewart’s Axis Of are a neat little power-trio who just might be 2013’s best kept secret. Tours with punk-rock stalwarts The Bronx, Therapy? and Lower Than Atlantis have all helped their profile tenfold and it’s thoroughly well deserved.

What grabs you about Finding St Kilda is how immediate it is; a huge thumping, crunching rush of excited, exhilarating sounds packed into 34 minutes. Axis Of display their nationality on Finding St Kilda like the roaring explosion of a fireworks shop going up in flames – the accents of drummer Ethan, guitarist Niall and bassist Ewen are so strong and expressive, full of warmth, heart and endearing passion. Backing this up is a genre-spanning hail of interlocking styles. Predominantly punk rock is on the cards, but Axis Of seem to shun the notion of being pigeon-holed, as songs develop and get progressively more intense (the scything bark of Aung), experiment with xylophones (Stan Winston’s Rough Seas) and get thoroughly me(n)tal and more unhinged (Re-written In Big Ink and Edge Of The Canebrake are two strong examples of experimentation, with the former being a barking hardcore hailstorm and the latter a part-prog, part-post-hardcore stamp of solid and expansive songwriting.)

Opener Cardiel is a slick crunch of exuberant pop-rock, driven by a strong melody (that flows constantly through the remaining 10 tracks) with a slight stoner-grunge element fighting its way forward. Continuing the spirited bouncing pace, Mendelssohnstrasse, piles in gang-vocals, erratic, stuttered timing and seriously thick grooves that squeal and hum with vibrant energy.

We Dine On Seeds is an absolute banger and where the air-drumming starts. Sounding like Torche, circa their most recent album Harmonicraft, Axis Of blast out distorted punk rock with speed and huge amounts of sugary joy. The muted trumpets are a particular delight, punching through the bass-heavy mix alongside the soaring choir-like vocals, which are yet another nice touch.

Stringent hardcore is experimented with on The World’s Oldest Computer, a track that feels like an Irish La Dispute turning on itself, chanting and lamenting with equal rage and cleansing, dirge-sounding riffage, which gets progressively darker and more sinister. Aung is under 2 minutes of spitting, chaotic Converge-lite thrash (convenient for a song that seems to be about being chased) Guitars spasmodically jerk and contort alongside the hailstorm drumming, which is tight, intense and breathless.

Lyrically, it’s all about Stan Winston’s Rough Seas – I don’t think I’ve ever heard an album that mentions dandelion beer with such gusto and pride, or laptops telling me to galvanise. The chords are crunchy-as-hell, channelling that deep, booming pop-rock tone, accompanied by the smile-inducing xylophones and the chants of various Irish islands (Claggan and Bellville) – which only strengthens the personality and warmth for their homeland that Finding St Kilda exudes.

The so-fucking-catchy-it-hurts riffs of Brobdingnagian are utterly sublime – as is the fake ending, which just lurches into another Torche-style bear hug of chunky riffs that gallop and fall over each other with punishing precision. The erratic fury of Rewritten In Big Ink, splatters through several stages of hardcore in it’s brief 90 second tornado – going suitably 80’s hardcore squealing riffage at one point, before evolving into a headbanging rollicking of blast-beats and arm-swinging meaty rage. The stark, erratic contrasting styles doesn’t feel out of place, because that guitar sound is so damn infectious and ever-present, even when Axis Of sound like they’re channelling Jacob Bannon‘s Massachusetts mob of nutters, they still retain their odd melodies and alt-punk riffs.

Edge Of The Canebrake is a weird mix of severe post-hardcore; harsh riffage, barked vocals and jagged guitar lines that gets progressively louder and more sinister, hitting the breakdown of a solid wall of Mastodon-style epic-rocking, harnessing prog-elements for good measure and more of that Axis Of trampling, contorted signature tune.

As debuts go, Finding St Kilda by Axis Of is utterly fantastic and absorbing. The songs are huge and discordant, brimming with wild, volatile potency and unquestionable amounts of heart and zealous warmth. Get it here.