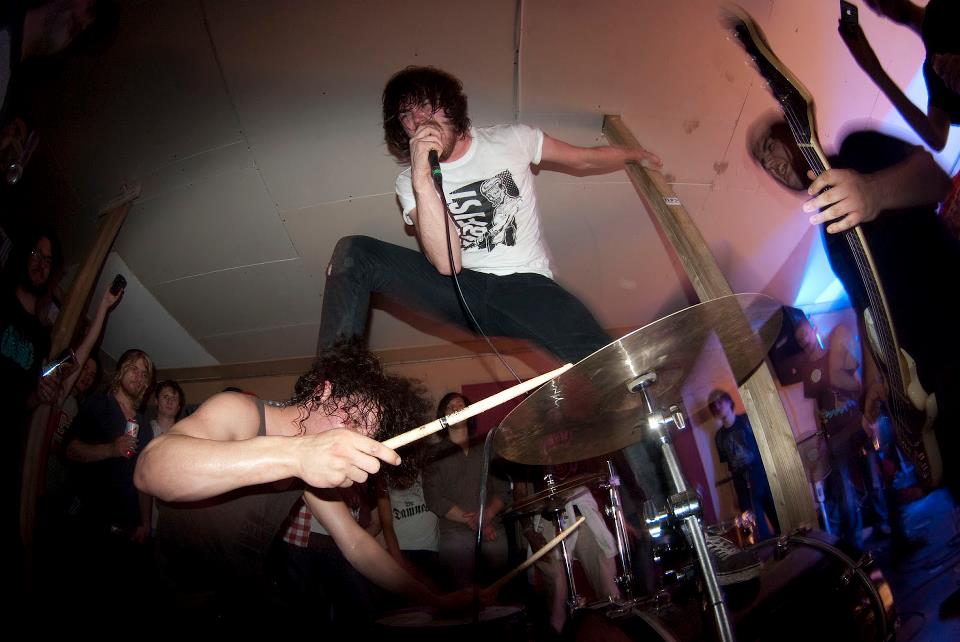 Few weeks back I had the pleasure of seeing Baby Godzilla live and in concert. Recommendations from others about their musical outpouring on the live circuit included “I didn’t realise they were a four-piece” and “they treated everywhere as the stage, literally everywhere.” This was pretty much what happened when I saw them thrash their guts out supporting Hawk Eyes and Black Spiders back in October.

With both guitarists spending most of their time harassing the crowd, climbing on the bar and using people as mic-stands they were pretty much a security guards worst nightmare. As a live act, they were an unstoppable bombardment of wild, raw, savage energy. The words “where the fuck has he gone?” were pretty much thought by everyone when one of the maniacal guitarists disappeared from sight, only to appear seconds later, swinging his guitar like he was taking part in the hammer throw. If they play every gig like that – i.e. like it’s the last days of Rome – dude, that’s commitment to the cause.

Last year I reviewed their mini-album/ep thing, called Oche, which was a twisted mangle of contorted riffs, punk-rock splatter and delirium. Knockout Machine dismantles the notion of the brief experimentation featured on Oche (the sea-shanty romp of Powerboat Disaster) and simply decides to nuke the site from orbit, rather than charge about lobbing dynamite.

The schizophrenic mind-melt of time-changes and breakneck noise-punk clatters past with vomit-inducing excitement and terror..

As the squealing, drawled feedback of opener A Good Idea Realised begins to bleed through, you can almost imagine the Baby G lot straining at their chains, aching to be free. The blood-frothing punk charge hits with the force of a truck; riffs are tearing and utterly demented, whilst the vocals are harsh hair-ripping, teeth-gnashing soundbites of frustration and madness. Don’t think this is all noise though; there’s hella-groove to this chaos and Baby Godzilla know how to channel sleaze into their dropkick-to-the-face they call music.

Trogloraptor is the one-hit KO punch, clocking in at 36 seconds and is an unrelenting frenzy of uncompromising frustration and violence, bellowed at 1,000 miles per hour. Also, the video is fucking awesome and a nice tribute to Australian duo, DZ Deathrays. The scuzzy, polluted bass grumble of Whorepaedo bursts forth into a scrambled punk rock howl of angular distortion, grime-laden feedback and cries of “YOU’RE ALL WHORES AND I’M JACK THE RIPPER!” and feels like a lost Pulled Apart By Horses song fed through the meat grinder of ultimate power, maximum life.

A Great Idea BastardisedÂ  sounds like early Refused, circa Songs To Fan The Flames of Discontent-era and is utterly barbaric and ferocious. It also showcases Baby Godzilla’s brilliant way of chaining their short-sharp bursts of intense, chaotic energy together using passage of harsh, raucous feedback and it benefits their relentless enthusiasm, by not toning down the rock, but slowing things enough for them to get their breath, ready for the next onslaught of depravity. Closer, In The Name of Science and Progress channels the distorted fury of The Chariot from the outset and barely lets up for all of it’s 4 minutes and 49 seconds. The schizophrenic mind-melt of time-changes and breakneck noise-punk clatters past with vomit-inducing excitement and terror.

Knockout Machine is an EP made by maniacs for maniacs.Â  One of the few bands where you can actually HEAR them chucking their instruments about. Lose your mess to this immediately and file under “let’s get wrecked” because you most certainly will be after hearing this.