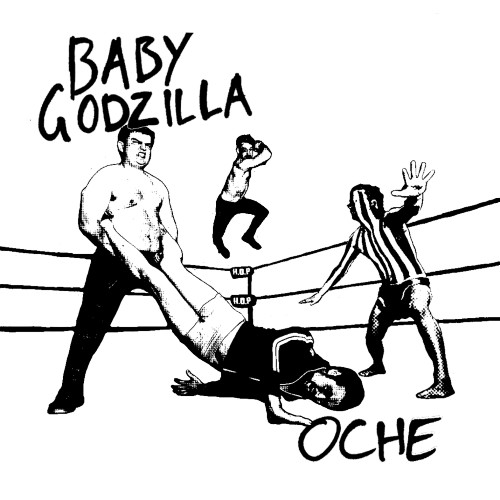 Imagine if Godzilla was in a band â€“ it would just be the sound of him firing that energy beam from his mouth into a drumkit. Thatâ€™s punk.

Baby Godzilla are a foursome from Nottingham and from the off itâ€™s clear to see where their allegiance and influences firmly lie â€“ the realms of chaos. Itâ€™s punk Jim, but not as we know it in some cases and in others, it’s convulsive mathcore brutally clattered into your eardrums at high speeds and volumes.

Thereâ€™s some brilliantly twisted things happening on this EP. The opening track â€˜At The Ocheâ€™ begins with a turmoil of squealing feedback and mangled chords, before barraging into scrappy, rapid fire math-punk and raucous vocals that are spat with scything maniacal glee.

Before you have time for breath, the next track explodes into life, like Nicolas Cage and John TravoltaÂ beating each other up whilst speeding towards doom on a pair of turbo-powered schooners. â€œPOOOWWWEEEERRRRRRRR!!!!â€ is about the only recognizable lyric and itâ€™s screamed with such vicious and mischievous delight, itâ€™s hard not to feel that this is something thatâ€™s totally awesome sounding. I love how Baby Godzilla evolve â€˜Powerboat Disasterâ€™ into what appears to be a â€œyo-ho-hoâ€ see-shanty at several points, before morphing back into this bloody-thirsty face-punch, curb-stomp of dense noise-punk. The even throw in some â€˜back-porchâ€™ blues acoustic guitar just to mess with your head.

â€˜Braille For An Axemanâ€™ has an absolutely blistering opening salvo. Akin to Refused (who Iâ€™m guessing theyâ€™ve been compared to a lot), itâ€™s that over-driven, riff-soaked hum of buzz-sawing guitars squeals that lurch and convulse with a snapping guttural appeal. Three lots of vocals then continue to bark and shriek at each other, one in the background, the other two at a constant never-ending war. Itâ€™s hard to comprehend anything or even how theyâ€™re managing to play their instruments at the same time. Itâ€™s as if theyâ€™re having a party and a bloody fight to the death at the same time.

â€˜Dave Lankesterâ€™ is more of the same, beginning with a squealing bass-driven build up before slamming home with the distorted, overlapping vocals and the sound of a guitar being strangled. Lurching and heaving like Brian Blessed after a night on the shandy-pop, this blaring, frustrated bombardment feels unstoppable.

â€˜Thottyâ€™ could quite easily slot alongside anything from â€˜The Shape of Punk to Comeâ€™ and no-one would bat an eyelid. From the weird sampled-violin intro and someone counting off, this blast of barely restrained energy is the younger, more hyperactive brother of â€˜The Deadly Rhythmâ€™ perhaps by way of Every Time I Die for good measure, thanks to the dirty groove Baby Godzilla adopt.

The final track and bizarrely titled â€˜The Three Legged Race.istâ€™ decides to not bullshit the listener and gets progressively faster and more demented. Reminiscent of Some Girls and Pulled Apart By Horses; it just continuously pummels riff after sweat-soaked riff of pandemonium after the opening staggered groove. Itâ€™s as if the band are tearing themselves apart, piece by piece â€“ utterly unhinged, but utterly brilliant rock â€˜n roll destruction.