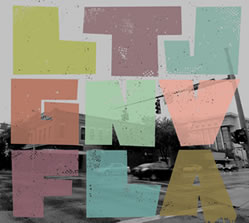 Band – Less Than Jake
Album – GNV FLA
Label – Sleep It Off Records/Cooking Vinyl
Release Date – last week I think
Sounds like -The glory days of 2001, playing Mario Kart/Goldeneye and not having a care in the world.
–

Leaving Warner Bros. records is possibly the 3rd best thing Less Than Jake have ever done. The first being writing an album as stunning as ‘Hello Rockview’ and the second their ‘biggest mosh pit ever’ at Reading in 2003 (I should know, I was there.) Finally free from the clutches of the money-grabbing, record-toning down corporate blow-hards, the ska-punk 5 piece are now able to release what they want, when they want on their own label: Sleep It Off Records. The result? ‘GNV FLA‘ a supposed return to glory days – but is it? Well, let’s see….

Let’s be straight about this, what I heard from ‘In With The Out Crowd‘ was pretty dire. (Hard words for me to say, as I’m a notorious LTJ fan) It was like a really fifth-rate pop-punk band ripping off Chris Demarkes vocals, whilst playing the most watered down mush ever created and passing it off under the glorious Less Than Jake name. Urgh. Thankfully, the Gainesville boys have got over this brief decent into madness and produced something that is more in line with their ‘Borders and Boundaries‘ work.

Itâ€™s a sombre, melodic start in the form of ‘City of Gainesvilleâ€™; light-ska licks, coupled with a distinctly summery brass section and a slow drum beat. Then it suddenly erupts into a fury of punk rock splatter with ‘The State of Floridaâ€™ acting as the albums brief, but sprightly one-two punch. Itâ€™s the 3rd track where they really find their feet in the form of ‘Does The Lion City Still Roar?â€™ Itâ€™s classic ‘Jake â€â€œ immensely danceable intro, a cracking chorus and an underlying beat that will capture the ears of fans of old with ease. Unlike their previous two albums, it seems as if trombonist Buddy and saxophonist J.R. have actually been given microphones to record their instruments into â€â€œ the brass is increasingly prominent and a refreshing and welcomed return to their sound.

‘Summon Monstersâ€™ sounds like a cut from ‘Hello Rockviewâ€™-era, whereas the fruitless-sounding nature of ‘Abandon Shipâ€™ could possibly be directed at the bandâ€™s past attempt at stardom on Warner Records, especially in the line â€œtreading water with weights around my neck, a shipwreck of restless accidents.â€Â Perhaps even the line â€œGive me some forgivenessâ€Â could be directed towards those who gave their previous efforts a lukewarm/negative verdict.

What ‘GNV FLAâ€™ seems to have that ‘Anthemâ€™ really lacked is energy and a huge chunk of attitude. ‘Settling Sonâ€™ is an example of the terrific pace this album has. It also showcases the band telling the songâ€™s protagonist to basically do something worthwhile with their life and even though it may seem like youâ€™re in a precarious position; â€œwalking the tight ropeâ€Â itâ€™s better to take the chance and make something of yourself rather than waste it going up in smoke, working in some shithouse factory.

Then again, the song could be about cigarettes.

The catchiest song ever for 2008 award goes to ‘Golden Age Of Negative Ways.â€™ Twee-handclaps, some outrageously parpy brass and lyrics that hark back to ‘Gainesville Rock Cityâ€™ song-writing that slaps a huge grin on my face. ‘Conviction Noticeâ€™ focuses on financial troubles, with the lines â€œmoney canâ€™t buy happinessâ€Â and â€œdollars and cents are not making senseâ€Â showing that despite the bandâ€™s exuberant, adrenalin rush of punk rock, theyâ€™re concerned about fiscal matters, or at least are willing to sing about it.

What sets this apart from other Less Than Jake albums is the way vocalists Chris and Roger compliment each other so well. This is quite possibly their strongest album vocally; both singers singing to an exceptionally high standard for melodic punk rock, with Chrisâ€™s gravely drawl sitting nicely next to Rogerâ€™s slightly higher-pitched and grimy shout. This is easily their best work since ‘Borders and Boundariesâ€™ and dare I say, possibly better than the 2000 release itself. A fine return then from one of my favourite bands, definitely one for the fans to sink their teeth into and a great starting point for anyone interested in exploring their music to see what the fuss is about – a solid slice of punk rock, with enough ska to keep the die-hard fans waving their arms and shaking their feet until the end of time.