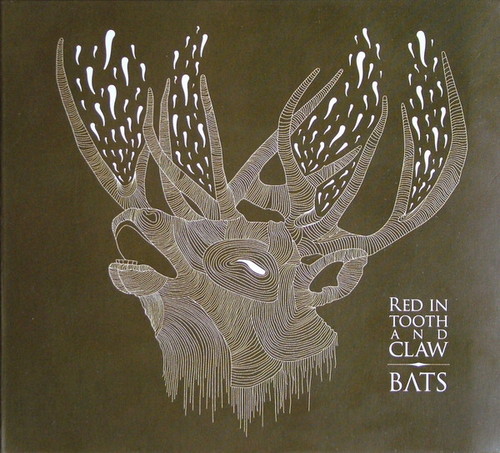 BandÂ  – BATS
Album – Red In Tooth And Claw
Label – Richter Collective
Release date – August 2009
Sounds like – A majestic stag head. Hanging upside-down in a dark cave, bloodthirsty screeching. Flesh being stripped from bone, the slash of claws and the gnashing of teeth.

Holy testicles batman! We could have a surprise on our hands here. Like fresh, warm blood soaking into sawdust, the Kurt Ballou influence is saturated deep within this 11 track debut from Irelandâ€™s BATS. The rough-form template of stuttering, stop-start punk that was present on their ‘Cruel Sea Scientistâ€™ EP has been picked apart, stripped down and reconstructed; Steve Austin (Lee Majors) style – i.e. itâ€™s now heavier and comprised partly of metal.

The themes of evolution and sea creatures which featured so prominently on their debut EP are again present alongside more complex subject matters such as the mathematics of Andrew Wiles, surgical procedures and gamma rays. Whilst they may not be the most typical topics to put to music, like Down I Go before them, BATS manage to create a song out of the strangest issues and more importantly, theyâ€™ve fashioned a body of work that had morphed into something truly exemplary.

‘Higgs Boson Particleâ€™ and ‘Gamma Ray Burst: Second Dateâ€™ open the album like a familiar double-act who are astute with their timing, poise and dexterity, knowing just when to deliver the punch-line (or in this case, riff and drum hit). ‘Higgsâ€Â¦â€™ plays the straight man, favouring a subtle build of punchy 1 note strumming that gradually moves stubborn percussion beats and the foreboding mantra-chant laced with trepidation. This continues to rise in sound as the guitars slice cleanly through, followed by the vocal chant which becomes more anxious, irate and maladjusted, until vocalist Rupert Morris is screeching his words under the now heavy wave of pummelling riffs. It then snaps as ‘Gamma Ray’ muscles its way onto the scene, guitars stabbing great misshapen holes of schizophrenic-punk into the mix. The shift is immediate, similar to that of a lumbering Transformer morphing into some breakneck sports automobile. Vocalist Morris takes on multiple personalities, changing between disgruntled slovenly punk shouting, to steel-voiced quick fire intone, to shrieks of enraged joy and then to harmonised ball-clenching wails. Thatâ€™s just the first 2 songs; this train of jagged, multi-song-personality head fuck continues throughout the remaining 9 tracks with zealous determination and dexterity.

‘Credulous! Credulous!â€™ starts with one of the best breathless exclamations ever and continues to build on this almost tribally, dance-beat, within the choppy guitar squeals and discordance. The depth of the BATS sound is stunningly apparent here, as the low pluck of the rhythmic bass, dense drum hits run steadily beneath the sometimes erratic, sometimes filth-covered, sometimes squeaky clean guitar lines.

The grind of the guitars on ‘Andrew Wilesâ€™ hack a sodden path ruthless inelegance, before lurching into the jagged twists of dance-punk frivolity. Morrisâ€™s shriek of ‘I DESCRIBE MY LIFE IN MATHEMATICS!â€™ followed by a detailed account of the great mathematicianâ€™s 7 year discovery of the proof of Fermatâ€™s Last Theorem staggers forth with caustic vigour. Kurt Ballouâ€™s influence really starts to shine through come track 5; ‘Lord Blakeneyâ€™s Armâ€™ as the convulsing jerking shred of Converge picks its way through the layers of Scrooge-tight guitar stabs and rolling thrash-drum beat. The vocals spit acrid venom similar to that of Fear Before The March of the Flames, and of course give nods towards the irrepressible animal howl of Jacob Bannon. The breathless panting, unstable, yet aggressively choppy guitar screech tear and gut with see-sawing determination and complex-hardcore dynamism.

The tale of 2 oceanic beasts locked in conflict is detailed in atmospheric drone of the stomping ‘The Cruel Seaâ€™. Guitars stab with the speed and frantic bloodlust of Roberto from Futurama, whilst vocalist Morris pleads to the prehistoric monster known as the Plesiosaur to save him and the rest of the band/crew from the dreaded maw of a creature known as a Tylosaur. In many respects, itâ€™s the long-lost cousin of Down I Goâ€™s ‘Gigantic! Titanic!â€™ which also told a tale of a horrific disaster out to sea.

Itâ€™s all about layers and the thorough usage of them. ‘Shadow-Fuckingâ€™ piles guitar on top of guitar like a furious builder constructing a mansion out of fenders. The background hum of reverb interplays within the erratic shuddering build that then twists into a hook-filled dance punk stomp and what is easily the best song the 5 piece have ever written. ‘Star Wormwoodâ€™ fits a similar template, albeit one thatâ€™s spent most of itâ€™s time cleaning up its act, leaving the heavier elements on the shelf and instead selecting a more pop-based structure.

The flailing nature of the instruments on ‘Bats Spelled Backwards Is Stabâ€™ gives the impression of a mad scramble to the finish line, with each band member desperately hammering the shit out of their respective piece of musical equipment, eager to for the triumphant victory. I defy anyone who doesnâ€™t join in with the tracks title chant, which is reminiscent of a group of drunken footballers heckling from a terrace, complete with off-kilter handclaps.

The start of ‘Vermithrax Pejorativeâ€™ has more in common with battle metal, especially the heavy, percussive opening and Morrisâ€™s caterwauling screech of â€œGIVE ME YOUR DAUGHTERS! THE ONES WHOâ€™VE NOT KNOWN THE FLESH OF A MAN!â€Â Assuming the role of the great Vermithrax, BATS paint the giant winged wyrm as the underdog, a defeated beast that has suffered at the hands of man (â€œpeople have killed all my childrenâ€Â¦this man pierced my throatâ€Â¦I am the last of my kindâ€Â¦â€Â) Musically, itâ€™s their heaviest song to date; a rumbling battering ram of tight, concise metallic rock with vocalist Morris screaming his throat red raw in unyielding ferocity.

Closing track ‘The Barleyâ€™ staggers its way forward like a feedback-soaked Don Caballero b-side, mixing reverb and strange pitch noises around its dogged plod. The only vocals are spat with disgust, calling for the death of the witches by conflagration due to crop failure over a quick-fire blast of anxious metal-edged punk. It climaxes with a blurred fuzz of low-end distortion and guttural noise, ending what has been a spectacular debut.

Natural selection is all about the survival of the fittest and ‘Red In Tooth And Clawâ€™ is most definitely a healthy beast, residing top of the musical food chain, wings spread, ready for battle. Just remember, BATS spelled backwards is STAB and possible album of the year spelled backwards is ‘raey eht fo mublaâ€™.