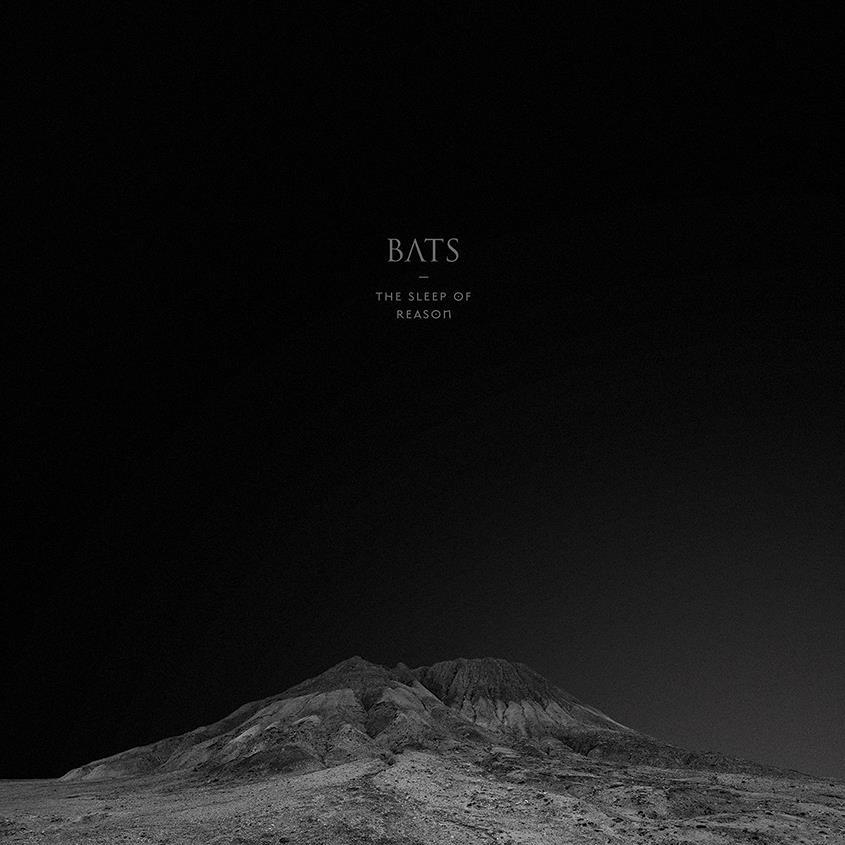 This is the bubbling concoction of chaotic science and particles running through the second album from Irish five-piece BATS, who have really pushed their theories, musicianship and themes into new and drastic dimensions, both lyrically and musically.

It’s hard to describe what ‘The Sleep of Reason‘ sounds like. BATS create such dark, emotive yet equally hectic dance-punk, meets math-rock bedlam. I mean, the layers and layers of sound that make up â€˜The Sleep of Reasonâ€™ is pretty awe-inspiring. Just when you think they couldnâ€™t cram another guitar in, they manage to. It doesnâ€™t feel bloated though â€“ take â€˜Wolfwranglerâ€™ for instance; built predominantly around bass and a steady, stoic drum roll, waiting for the first guitar, which squeals into play. The second cuts an erratic staccato strum, sounding more like a synth being strangled and then the third muscles in, blasting out a dense, clattering chatter.

The album cover is also deeply unsettling. The minimalist and dour colour scheme will put you on edge, but is equally enticing. It resembles a location from LV-426 crossed with a black and white screen capture from the game Borderlands. I keep thinking of Prometheus and the whole Alien franchise whenever I see it.

Opening track â€˜Emergent Propertiesâ€™ sounds like an erratic heartbeat. The drums sound like the rumbling beginning to a thunderstorm, whilst a wailing howl smothers everything in nauseous dread. It continues to rise, the drums getting louder and louder, the wailing ever more ominous and horrifying. Itâ€™s a relief when it kicks into the aforementioned â€˜Wolfwranglerâ€™ and then relief kind of dies, because â€˜Wolfwranglerâ€™ is just as perverse and deliciously unpredictable. Itâ€™s no wonder the video is of the band emerging from the ground, eating raw meat and acting like man-beasts. This song screams and bleeds with gnashing ferocity the need for a dark and unsettling tale of birth, survival and death.

â€˜Stem Cellsâ€™ lurches forward driven again by pounding drums and a stark, heavy rock build of gritty guitars that merge into one big blast of grinding noise. They suddenly evolve into the BATS staple â€“ as a more danceable beat kicks in. Vocalist Rupert Morris sounds uncomfortably like an android, which is desperate to be human. His voice feels false, with the tone shifting, become more synthesized in places, but slowly builds emotion (hilariously, when the swearing starts â€“ â€œisnâ€™t it a pity about the fucking people?â€ and becomes a roar of triumph/fury with the line â€œSHOCK IT UNTIL IT BEATS AGAIN!â€ Medical research and deciding the fate of a cluster of cells has never sounded so raw and guttural.

â€œWe would do well to accept that we are dustâ€ concludes Morris on â€˜Astronomy, Astrologyâ€™ a track which states we should accept that the universe wasnâ€™t created with us in mind. I mean, we all know it was created for dinosaurs, right? Intricate and tantalizing guitar-lines litter this cold, menacing dance-punk planet-sized rant.

BATS cut â€˜The Sleep of Reason Brings Forth Monstersâ€™ into various parts; achieving a staggering, almost prog-rock mind-bender of sonic madness. The jolting chorus, cries of â€œBEWARE! BEWARE!â€ the high-pitched wailing of â€œmonstruos!â€, the enveloping darkness, the taunt, sharp-edged guitar sound and the lyrics, oh god the lyrics â€“ â€œeat the weakest, eat the youngestâ€¦â€ is chanted like a solemn, hollow mantra of hopelessness.

Former Down I Go frontman Pete Fraser lends his mighty dino-lungs to â€˜Heat Deathâ€™; a song that gives a heavy nod to System of a Down in the opening salvo. This is where similarities end however. If you thought anything else beforehand was weird, â€˜Heat Deathâ€™ makes everything else look positively sane by comparison. Some creepy-as-fuck dual vocal overlaps, guitars that sound like sirens, howling for the end of the world, maddened screams, bludgeoning drums, perplexing chanting that feels like the last rights. This is BATS pushing boundaries, creating something that sounds like Unsane gone wrong and itâ€™s fucking brilliant.

Ill-fated scientist Thomas Midgley Jr is immortalized in song on track 8. The mechanical engineer was plagued by the negative environmental impacts of his innovations and achievements. Although a brilliant man, he was flawed and ended up accidentally killing himself with a machine of ropes and pulleys he rigged up to help him move about after contracting polio. This feels less like a dig at Midgley, but more an ode to him â€“ Morrisâ€™s throat-ripping cry of â€œTHOMAS MIDGLEY? WHAT HAVE YOU DONE?â€ is the exasperated and desperate roar of disbelief, whilst the taunt and scything, see-saw guitars will stay rooted in your brain. Itâ€™s an exhausting listen; the passion and strain is evident, as is the tense punk-rock nature of the tracks angry and destructive chorus â€“ hands down their best work to date.

â€˜Terrible Lizardsâ€™ celebrates the birth, existence and finally the death of the dinosaurs. This is of course, backed by the kind of strident, metallic, post-hardcore, littered with disjointed time-signatures you would come to expect, as it begins to evolve into something reminiscent of touring buddies Down I Go (also, why no Pete on this track? His Tyrannosaurus impression is brilliant!).

Iâ€™m convinced â€˜Final Entropyâ€™ is the the sound of the end of the world. The spiraling, circling guitars, bend and loop around the drain created by the hollow drum beats, whilst beforehand the scrawling feedback of terror and explosive torment signaled the start and the end. In fact, BATS describe it as â€œthe last moments of our universe as the last black hole evaporates, leaving nothing no cause, no effect, time rendered impotent.â€ Everything feels suddenly coldâ€¦so cold.

Warning, this isnâ€™t an easy listen. Itâ€™s a complex and jarring 61 minutes, yet itâ€™s also note perfect in every way â€“ the guitars are clean (but evil), the drums an apocalyptic barrage and the vocals have a schizophrenic quality laced with such zealous and ardent enthusiasm. â€˜The Sleep Of Reasonâ€™ is a vital, beautiful, terrifying and fanatical album and a worthy final release from the Richter Collective. Take a bow everyone, youâ€™ve earned it. Buy it y’all.