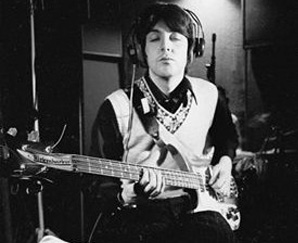 For everyone who’s still reading after I mentioned McCartney, I will now endeavour to prove my theory:

On CD2 of The Beatles‘ self titled album 1968 album, usually known as The White Album, nestles an early example of H.M.

Paul must have been taking so many drugs it messed with his mind, as many of his songs on the album are pretty bluesy and rocky, unlike his usual cringe-worthy output. One such song, and the best of the bunch, is Helter Skelter. It’s usually famous not for being the genesis of heavy metal, but as an inspiration for Charles Manson, who chose its title as a name for his freaky theories about the apocalypse, and was convinced that some of the lyrics contained prophecies about a coming world war.

Described on the eminent Wikipedia as “proto-metal’, the song has heavy bass and even heavier drums, with McCartney screaming over it in his best rock “n’ roll style. It can easily be compared to Led Zeppelin or early Black Sabbath, and it’s a fair assumption that these metal trailblazers would have been influenced by this raucous track. The The White Album is a much more interesting and enjoyable listen than Sgt. Pepper, which undeservedly wins “best album ever’ polls all the time. McCartney’s Helter Skelter and also Why Don’t We Do it in the Road? Show a different side of The Beatles music, and prove without a doubt that heavy metal was invented in 1968.

Click on the player below to hear the infamous track ‘Helter Skelter’:

Anyone who knows an earlier example of H.M. let me know!