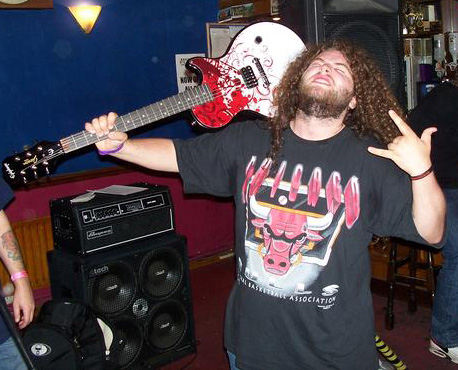 Bam! From nowhere like a frenzied kitten suddenly attacking your prized knitwear, Bedrock has been and gone!

There were a couple of posters on a corner of a newsagents near my flat talking about how ROCKED UP it was going to be, but it was the small text at the bottom of the poster that really interested me… Air guitar competition! The prize was a flaming guitar, possibly what the devil would use to jam with in the morning after his weetabix and hot milk.

Bedrock hosted a number of talented bands over a two day period, and it was all building up to the finals of the air guitar.

I sat down with pint of Guinness and prepared myself for the 3 finalists. They looked ready to show Bedford what they were made of so I had to grab my girlfriend’s camera…. But…. Shit!!! She used up the bloody batteries!

I felt like I was going to be sick, the room was spinning until she said that she would draw up the 3 guys in Paint; now I wanted to see that!

The 3 rockers hands were sweaty but ready: Name: Master Blonde AKA “The Rebel” – Air Guitar final at Bedrock
Age: At the most 15
Track to air guitar to: Sex Pistols “Anarchy in the U.K.”

As soon as the track started he took to the air like a flying monkey and latched onto a large man who started to spin in a propeller motion. This momentum headed towards the crowd and pints were flung into the air. So as you can guess not too many people were smiling, so the kid decided to leap off the man and take to the stage.

He then got into a guitar stance and started to strut his stuff in a way that would have made Sid Vicious feel uneasy.

So to finish off he ended, how he should of started, by flinging his long blonde hair round and cooling off the crowd from the hot sweaty atmosphere.

The crowd gave a few “woofs” and clapped in a English manner until he left… Now what could beat that? Track to air guitar to: The Clash “Should I stay or should I go”

Now this was a real disappointment. But of course by saying that it wasn’t like I was ready to leap onto the stage 😉 .

His head bobbed gently to Terry Chimes drumming and it felt that he was trying to push a burp out of you rather than feel the power of early punk rock.

After chants from the crowd such as “cooooooooooooooooooOOOooome on” and “do something!” He did start to feel the fires from within him reaching to win.

His knees began to henge up and down and started to fling his head like a possessed mosher… Now that’s more like it!

But alas, as soon as he was getting into it the track faded out… This didn’t matter as the cheering for the real star started to roar!
–
–
– Name: Jonnii Guns!
Age: 20
Track to guitar to: 5 minutes of pure guitar solo!
As Jonnii runs onto the stage you already know that he is going to win. The audience is cheering even before he has started and eats up the positive feedback by giving a huge grin.

The track starts and the beast of a man practically steps onto a high beer stained table and gives it his all.

His back starts to bend backwards in a slash pose and starts to wiggle his fingers to the track like it was the most natural thing in the world!

The crowd starts to shout “Jonnii!!!” and his lifts his mass amount of hair to reveal his ear in the style of possibly his favourite wrestler “The Rock“.

Still grinning he starts to flip his hair fast in a clockwise direction and the crowd can’t get enough! His upper body is now a demon shaped blur as it seems the devil himself has entered and wants to ROCK his way to the prize!

Fingers practically on fire he finishes by licking his air guitar up and down and giving off another Rock impression!
—

So who won you ask??

Guess what?!?!! I found a picture of him after all: