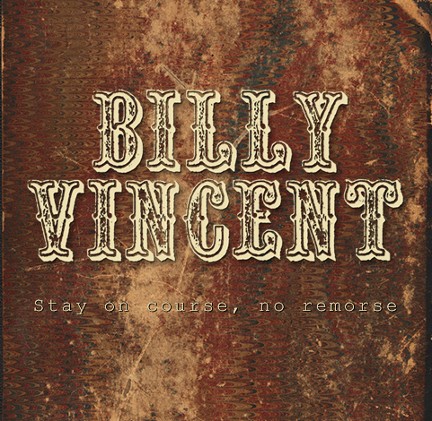 Iâ€™ve got to admit, Iâ€™m oblivious to the genre known as ‘dirty folkâ€™ – for those with a wrong mind it probably throws up images of men in long coats visiting theatres that only play movies with 3 Xâ€™s in the title. Iâ€™m assuming in musical terms, ‘dirty folkâ€™ refers perhaps to a more gritty and ramshackle approach to folk music, possibly the inclusion of impromptu feedback, the light fuzz of distortion and the sound of a mud clod smacking against a snare drum (perhaps not this). South Londonâ€™s Billy Vincent have achieved this to some extent and even thrown in several more sounds and images to conjure up such as pirates, sunny beaches, being stoned and milk-carton guitars.

One of the most interesting tracks from ‘Stay On Course...’ is ‘The Old Lamar Oakâ€™ which draws some inspiration from psychedelic folk-nutters MV & EE â€â€œ the slight echoing-pound of the lurching drums, dual-vocal wail and subtle guitar strokes and delicate background percussion give the impression of a group of inebriated druids jamming around a campfire.

The beginning of ‘On The Five Stringâ€™ fools me into thinking Billy Vincent have covered Tenacious Dâ€™s ‘Wonderboyâ€™ – the similarities between the opening guitar plucks is uncanny. Veering away from the hippy-world of wailing drones and scrawling noises, ‘On The Five Stringâ€™ features an underlying calypso style beat, effortlessly jaunting along. Even the ukulele sound, which thankfully doesnâ€™t dip into the George Formby territory, is a confident slice of hook-laden acoustic bounce.

Itâ€™s the delicate nature of several of these songs that really form the backbone of ‘Stay On Course, No Remorseâ€™, particularly ‘In My Pocketâ€™, with the kind of breathless, shivering vocals that sound almost Icelandic in their delivery, whilst the flowing atmospheric swarm of sounds and rambling Creedence-guitar hold everything together.

‘Destiny Arrestedâ€™ gives a nod towards the mournful-spook of Dan Sartain, and his western-style acoustic rock. For the most part it sounds brilliant, like some sorrow-soaked ballad that youâ€™d see a poncho-wearing bard play at the gallows; however, the vocals slightly let it down, sounding a bit Jamie T-ish, but there’s enough of Sartain’s brand of cutting swagger to single this out as one of the best tracks on the album.

The lyrics on ‘Trulyâ€™ seem to reference disaster and calamity (â€œfrom the pacifist with his head in the nooseâ€Â¦.the cannonball smashed and split the deck again, sent us sliding from the wreck againâ€Â) but chooses the positive path, with the words â€œto the debris we will cling till dawnâ€Â¦.kiss the sand and sing it all againâ€ – it has that distinctly rustic appeal of youthful exuberance, with the kind of anthemic sing-a-long that is so effortlessly easy to slide into, similar to Brand Newâ€™s ‘Soco Amaretto Limeâ€™. It sounds like something that would be played at over a montage of shots from an American-teen drama series.

The thing about ‘Trulyâ€™ is, that it works in dragging the listener in, catching them with its hooky guitar upstrokes, old-man harmonica and an erratic sense of optimistic chaos. Itâ€™s radically different from the other tracks, opting for â€œcram as many instruments in as possibleâ€Â tact, rather than the stripped down-bareness of the grief-stricken, alcohol-fuelled ‘Wrong Side of the Glassâ€™, which sounds like something a fragile old drunk would belt out the next time a karaoke night hits his local.

‘Stay On Course, No Remorseâ€™ by Billy Vincent is a distinctly warm listening experience, like knocking back several drops of a single malt and sitting with your eyes closed, savouring the flavour as it flows down your throat; that slight burn as it catches your pallet, but ultimately itâ€™s the soft glow of comfort and serenity you cherish.