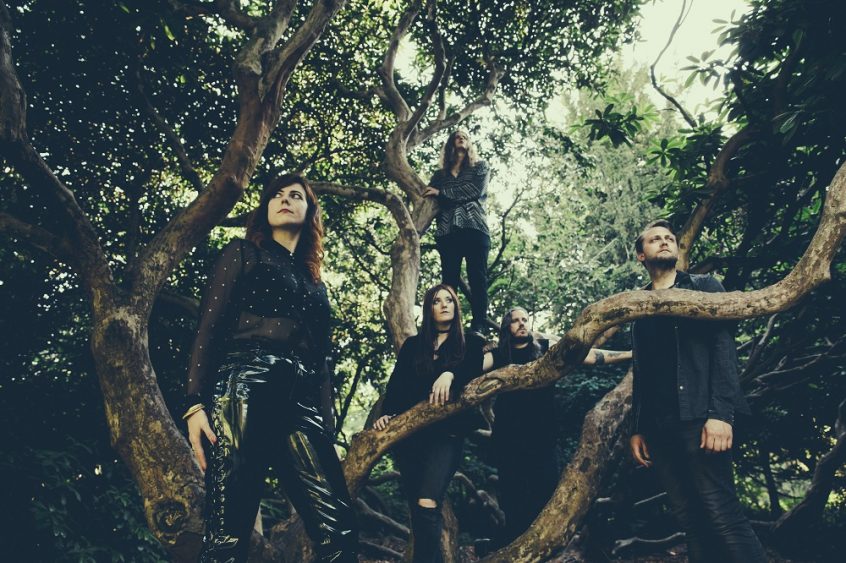 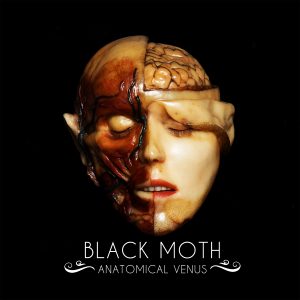 There’s some brilliant background surrounding the name of Black Moth‘s third album, Anatomical Venus. It comes from the work of Italian sculptor, Clemente Susini, who created wax anatomical models, vividly and accurately depicting partly dissected corpses. Nice! Susini had apparently created over 2,000 of these wax models to be used by medical students. It’s also taken from the title of a book by Joanna Ebenstein, on the same subject matter. Delightfully gruesome and morbid and suitably fitting to Black Moth’s sound.

Hailing from Leeds, home to Hawk Eyes and Blacklisters, Black Moth are driven by huge, pulsating riffs. Imagine if the sound of all the vehicles in Mad Max: Fury Road were guitars, then that’s close to the sound this five piece produce. That grim, but determined mixture of sleaze-laced garage rock, with crunching stoner-vibes and slab-thick Sabbath-esque blasts of seismic noise, make Black Moth a mouth-watering prospect.

The triumphant sound of Moonbow should grab your attention. If not, it’s the vocals courtesy of Harriet Bevan – they’re questioning, secretive and laced with a slight mocking tone as though they want you to reveal more. There’s a glorious moment about halfway through where everything switches into full Fu Manchu mode, and we’re cruising down a desert strip, in full king of the road mode, before lurching into some squealing Sabbath-esque dirt-rock, arms windmilling, strings singing and hair flailing.

The opening guitar hum on Sisters of the Stone is worryingly infectious. Must haves for this track? The ability to run a marathon with your arms drumming – for the full four minutes, this barely lets up; hammering home a potent, Torche-esque thunder of stoner-rock rampage right into your ears. The guitars drip with a molten, sticky grease and you’ll want to wash your ears immediately after hearing it – but you’ll never completely remove that sound. The buzz-saw riffs, the echoing, snappy vocals of Bevan snarl and sneer with derision on this furious and potent attack.

We enter a world of gloom-rock fuzz during Buried Hoards, a track that vibrates with strong Mastodon tendencies – huge skyscraper guitars that ring out an eerie, hollow tone, whilst the main riff marches along at an uneven and titanic-sized crushing gait. Huge sounding solo near the end as well. The turbo-charged rock ‘n roll destruction of A Lovers Hate, is a flurry of wailing six strings, clattering percussion and swashbuckling, caustic debauchery. It’s an absolute fist-pumper of an anthem and a huge, frantic rush to finish – driven by the overclocked drums and tense, scrawling bass. Other highlights include the grunge-metal burn of Scream Queen – the chorus is loaded with sizzling hooks and a section that gives a huge nod to the black ‘n roll nature of Norway’s Kvelertak, fusing the crushing power of their, lurching, Scandinavian metallic onslaught with some hammy, hard rock sludge. A Thousand Arrows slows things down somewhat, but is no less intense. Those Sabbath power chords ring out a heavenly (or hellish?) cacophony, whilst the bass vibrates with a gurgling, throat-clearing, smoky hum. Bevan’s dynamic vocals take on an ethereal and ghostly quality, but still sound suitably dramatic and persuasive in execution.

Anatomical Venus concludes with Pig Man, a gnashing, snarled and volatile conclusion of detuned-noise. From the screeching shred of the opening riffs, to the almost rap-rock vocal barbs, a sleazy, Clutch-inspired chorus – it’s helped along by the roars of being “Satan’s prodigal litter.” It rushes towards the haphazard conclusion through a bludgeoning, thrashing blast of sliced up riffs and a drum kit bouncing down a flight of stairs as Black Moth race to finish in breathless, sweaty exhaustion.

On this third album, Anatomical Venus, Black Moth pack a huge, crushing punch with their stoner-metal attack – a snarling and tenacious collection of songs not for the faint hearted – fill your ears and lose your mind.