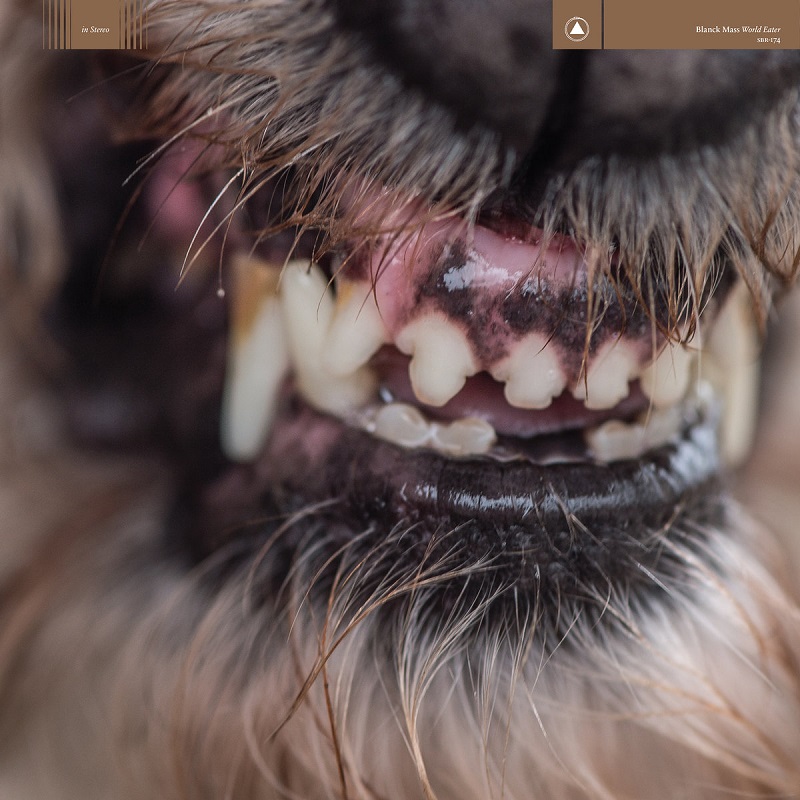 The mixture of both beauty and terror is abundant on World Eater; the new album from Blanck Mass (aka Benjamin John Power, of Bristol’s Fuck Buttons.) There are overlaps in sounds, ideas and dynamics present on the Blanck Mass work in comparison to Power’s main project and work with Andrew Hung. However, where Fuck Buttons move through a swirl of fuzz-tribal-neon-Olympics-dance that never stops building; Blanck Mass is the rebooted spectrum of Hal and Mother recording an album together (and succeeding) in hell, melting through the goddamn walls faster than you can say Game Over Man, Game Over.

World Eater paints a different picture than that of second album, Dumb Flesh and indeed, of Fuck Buttons itself. What you’ll notice is that this hits hard, full ramming speed, never letting up or letting go. It’s Crank – if Power slows down, it’s all over. Things get off to a supremely bonkers start with the “music-box-gone-wrong” evil twinkle of the superbly named John Doe’s Carnival of Error. This is a track that couldn’t be more aptly named – it sounds like a carnival from an alternate dimension that’s started to melt. It’s falling apart and laughing at the same time. The trickling, spook of the chimes, which are a wailing, shifting background hum is both oddly soothing and jarring. When the chopped-up vocal sample stumbles in, things get even more frantic and twisted. Layers of schizo-sound collides in a scratching mess that abruptly collides and instantly dissipates on contact. Picking up as though nothing as happened, Blanck Mass lunges forward with snarling energy in the form of Rhesus Negative, a nine minute blast of utter mind-fuckery. Corkscrewing through passages of scrambled noise-rave, this is a cut-to-pieces slam of glitching, radioactive fury. It’s a bludgeoning hammer of sound, that’s woven together with this almost ethereal electronic wash that bursts with triumph and ecstasy. What could possibly be a scream is utterly buried in layers of mutated feedback in the mid-section and is intrinsically disturbing, loud and brutal and mind-crushingly heavy. I mean, there’s a lot and I mean A LOT going on here, it never feels pity, remorse or fear; it just keeps coming and coming, akin to a certain destructive time-travelling creature.

The tripping post-club decay of Please is a valuable breathing space after the industrial burial plot of Rhesus Negative. There’s something about this track – it sparkles with beautiful, flowing energy, driven by this steady, rhythmic heartbeat. The distorted vocal samples glisten with this almost-soulful tone and bend and melt into each other, with”I always….I always…” being the only distinguishable bits of speech present. This feels as if it straddles between two planes of consciousness. That moment when you’re aware it’s a dream, but fighting to be free, as the train approaches, getting ever faster….this is that moment just before you suddenly wake.

You’re wrenched from that dream world, scrambling, frightened and bristling with adrenaline. The tribal drum thump of The Rat is relentless and consuming; it gnaws through to the bone, even with the sweet sounding electronic-synth scramble that covers the powerful percussion, it still drips darkness everywhere. As the computer-game code of cascading sounds begins to deteriorate and break apart, a raucous choir-cheer is looped over and over with intense urgency on the next track, Silent Treatment. Possibly the most erratic track on World Eater, Silent Treatment is skittish and non-committal; bouncing from patterns of abrasive hip-hop percussion, to scrambled, backwards-sounding vocal bleats, a clattering of relentless percussion and luscious, engulfing synth waves.

We descend into the very bowels of the underworld during the abrasive scramble of Minnesota/Eas Fors/Naked a mesmeric and deranged mix of squelching noise that begins to falter and decay into an eerie piece of sombre drone, that becomes oddly comforting, especially at the 4:50 mark when the sample of a waterfall is heard. From something that sounded so mangled at the start, this air of tranquility is somewhat comforting, especially on the 80s-electro-fuzz coda that reminds me of of the end credits of a TV theme slowly degrading into a pool of slime. Final track, Hive Mind, is overflowing with ideas, it can barely contain them all; rupturing and splitting open to spray the technicolour of content everywhere. From the warm, dripping synths to the scattered vocal bleats, which are slurred, mushed and hypnotic in execution to the rave-party chanting and whooping and the corkscrew of swelling, harsh, euphoric energy.

World Eater is an apt title in that sense – the music presented on here by Blanck Mass is all consuming. It’s hungry, ravenous and chews through the sound waves. A remarkable, thrilling and sinister expedition of Power’s mind and vision. Stream and purchase below.