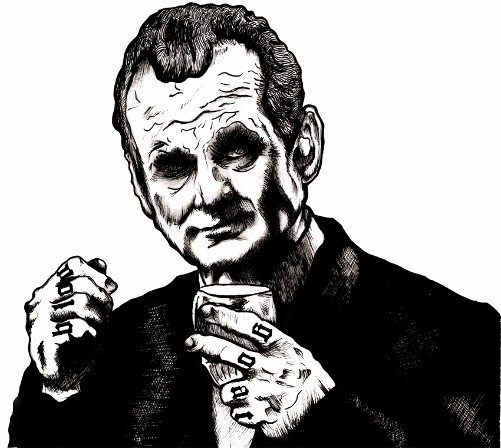 I approve of the gnarly Bill Murray artwork that Blowgoat have utilised to adorn their EP cover and t-shirts. Thereâ€™s something about the shadowing and the wrinkled, weather-beaten face that makes their merchandise fairly sinister and menacing. Plus, Murray looks like a cross between an aging pimp and someone who enjoys granting wishes on the day his daughter gets hitched. Perhaps future releases should include Phil Connors curb-stomping Ned Ryerson or Peter Venkman vomiting blood over Ray Stantz. Hell, Iâ€™d buy a t-shirt with either of those on.

Blowgoat are from Newport, South Wales although youâ€™d think they were from L.A. because this is straight outta the City of Angels-style punk rock. Vocalist Paul Davies could be Matt Caughthranâ€™s long-lost cloned brother from a botched experiment years ago. Itâ€™s uncanny how they sound alike, (albeit Davies has a more strangled, cracked shriek in places) and to be fair, they freely admit on their facebook page to ripping off the L.A. heavy weights. Hilariously, one of the songs on this EP is called â€˜FUCK THE BRONXâ€™ which raises a smile.

Opening track â€˜Slackholeâ€™ is anything but relaxed. Itâ€™s the kind of track that makes you crack your knuckles. Itâ€™s stained and filthy â€“ leaking this scuzzy, venom of brash southern-rock â€˜n roll debauchery. â€˜Fuck The Bronxâ€™ is a snarling rollick of guitars crushing under the weight of the blitzkrieg drumbeats and Daviesâ€™ irrepressible vocal howl, which gets progressively more guttural and chaotic. It reminds me of The Smoking Hearts â€“ that fucking vital and fist-pumpingly awesome. Deserves to be played at an insanely loud volume as a load of cars pile-up into each other at high-speed.

Man, I love a good lurch, especially the one on â€˜Yo Bitchâ€¦Iâ€™m Tom Waitsâ€™ â€“ seriously, you just want to pull a stance and riff that. This is Blowgoat at their heaviest â€“ a 30 second intro of bending, crushing metallic riffs and stomping badass drumming. It then goes headlong into a chant of â€œTOM WAITS TOM WAITS TOM WAITSâ€ which to be fair, is bloody funny. Absolute mad-props to the backing vocals on this, virtual hi-five going out to Blowgoat. They nail the chorus, which sounds like Every Time I Die being channelled through Zeke. Also love how the last minute just morphs into this beast of spiralling, grunge-metal pummelling â€“ makes you want to grow another beard over your current beard.

I like the stabbing, ceeerraaazzyyy guitars on â€˜Rhinoâ€™ â€“ sounds like Hawk Eyes going even more mental. It totally feels at home sandwiched between the frantic thrash-punk that only really lets up when Blowgoat deliver another thundering breakdown of posturing, hard-rock that doesnâ€™t so much as taunt, but tears strips off you and throws them to the dogs. The drumming is brutally tight as well, carrying the track through the jagged edge of the guitars with this unrelentingly furious attack.

â€˜The Purgeâ€™ is the longest track here, clocking in at 4.45 but plays on the stop-start card, but still follows a similar pattern that Blowgoat have laid out â€“ sound as hostile and as antagonistic as possible, but also sound like this is the kind of party you want to be at, 6 or 7 beers down the line, with another one gripped in your sweaty hand. The big-rocking, drawn-out riffs and bravado swagger is the icing on a particularly volatile cake. â€˜Misery Hammerâ€™ concludes proceedings, channelling more of that southern-metal flavour (think He Is Legend when they sounded fucking great) but with a thrash-edge.

P.s. Canâ€™t believe these guys are unsigned. WHAT. THE. FUCK.