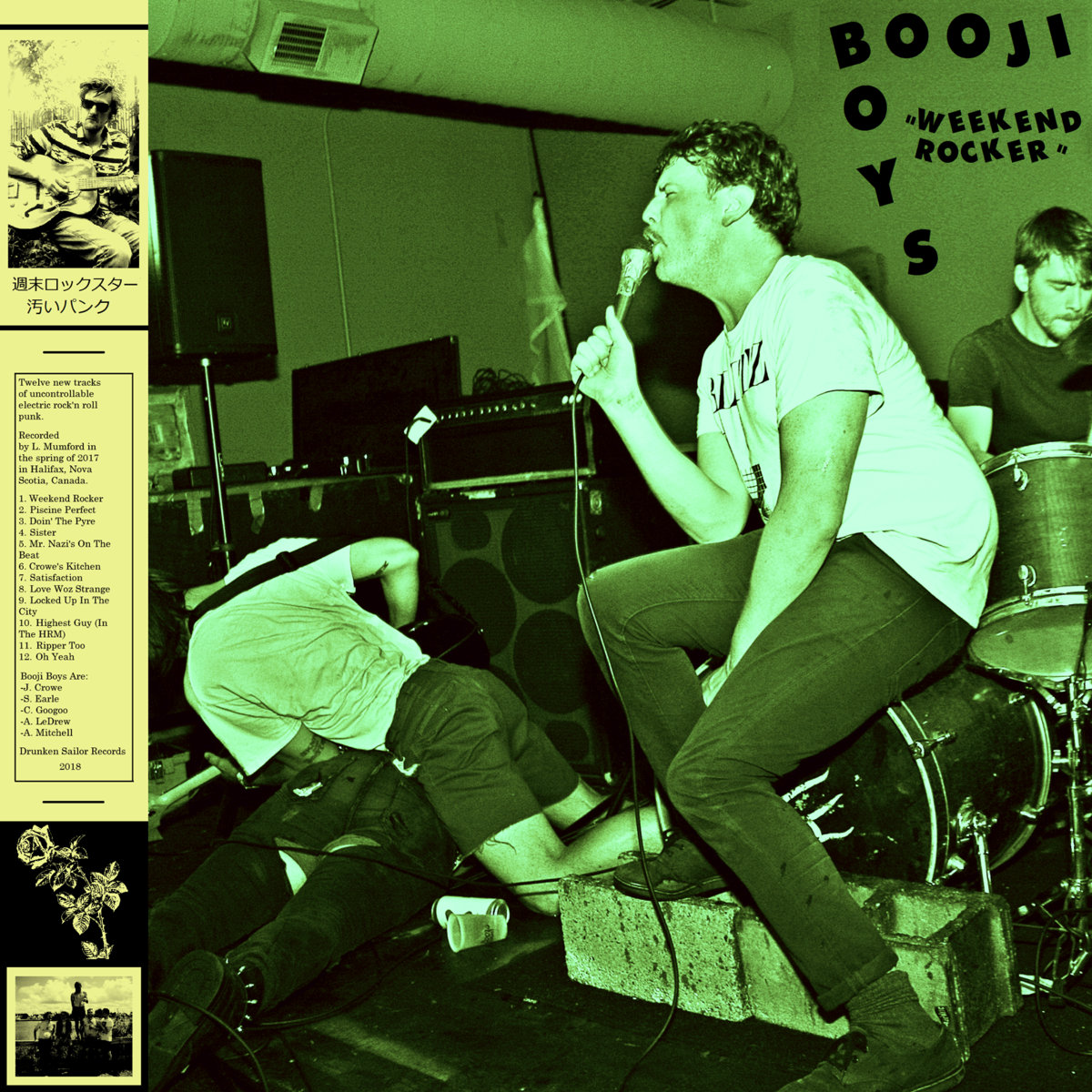 I want to count this as 2018 release really. Good of Jesus to have his birthday on the same day Booji Boys dropped a new album, eh? Top lad that JC fella, wonder what happened to him in the end? So, what do you need to know about Weekend Rocker then by these Halifax lads? It’s brief, I mean – at 12 tracks and 27 minutes (one of those tracks being over 7 minutes long) you barely have time to gulp a mouthful of air as another song launches itself at you. Taking their name from a character created by the mighty Devo, Booji Boys construct music that sounds like guitars being smashed through concrete walls, a whirling spin-cycle of flailing limbs and several people throwing up inside an amp, drenched in stale beer.

Good luck to anyone who can make out any words (save for the odd song title) spat by vocalist Alex. Lyrics are more gargled than sang, delivered in this breathless, inward-gasping rasp. They’re also fairly low in the mix, which is dominated by the scratching caterwaul of the twin guitars, courtesy of six-stringers, Cody and Drew who attack their instruments with savage and rending intent. Take the title track, the opening barrage to this slab of nuisance. The wailing screech of the guitars, the rabid bass-thumping build, which hammers away at a speed far too unsafe to be called healthy. Vocals sound as if they’ve been launched into a wind tunnel at high speed, slowly disintegrating apart due to the force in which they’re hurled.

This pace continues on the crackling energy of Pisscine Perfect, until we get to the scrappy indie-punk of Doin’ The Pyre, where some melody begins to take shape, especially on the upbeat sing-a-long chorus, which can be interpreted as shouting the songs title in a voice laced with sneering derision.

Weekend Rocker feels and sounds like a throwback to the late 70’s-early 80’s punk, with elements of mud-covered swamp rock thrown in…

There’s no time to take stock, as the next track, Sister, batters past with scuzzy, bouncing punk fury – a thundering blast of turbulence, driven by those razor-sharp guitar riffs, which at times, attempt to clean themselves from the mire of feedback, before launching back into the fetid grime. This is the kind of track the mosh pit salivates for and it’s all too welcoming to dive right in. Songs like the slight-Creedence sounding (melody only) Crowes Kitchen throw the odd curveball to Booji Boys and their racket; moving away from the onslaught, this adopts an almost psychedelic/stoner-vibe, as the guitars devour everything in his enoromous chomping wash of reverb and see-sawing percussion.

“I! Have got not satisfaction/I! Only listen to the hits!“* Screams Alex on Satisfaction, an 85 second vein-bursting attack on the senses, bringing to mind the raw fury of Land Speed Record Husker Du. There’s a surprising amount of comprehension on the garage-rock of Locked Up In The City, (from the scrappy NOFX-opening guitar wail) which is a relief after the continuous pounding that Weekend Rocker delivers and I’m A Ripper Too couldn’t be more aptly named – a tearing, serrated, teeth-baring growl of ugly rock ‘n roll. By the time Oh Yeah rolls round, a distortion-drenched pile-driver of frantic cymbal-fills, twiddling guitars, panicked vocal rants and wails, it feels strange that this journey through the world of the Booji Boys has come to an end. At over 7 minutes though, they make the most of it – stringing out what can only be a set closer; burying the listener in a heavy build of noxious feedback and teasing, frustrated noise.

Weekend Rocker feels and sounds like a throwback to the late 70’s-early 80’s punk, with elements of mud-covered swamp rock thrown in, as well as a modern take and destruction of the current state of hardcore. What I’m trying to say is, it’s excellent and you need it.

Stream/smash shit up to Weekend Rocker by Booji Boys below. It’s free as well, or pay what you want. You can order this bastard on vinyl as well.

Top tracks: Sister, Satisfaction, Locked Up In The City, I’m A Ripper Too

*Disclaimer – I THINK this is what he’s saying?