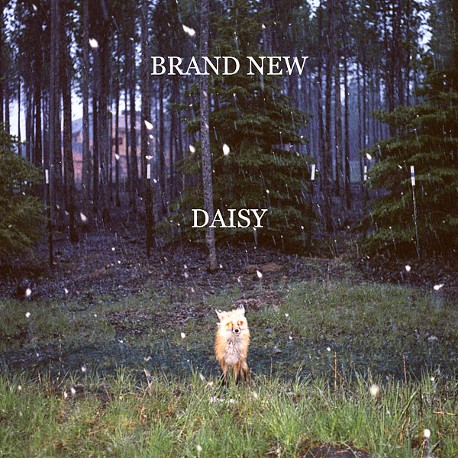 I sometimes feel like Iâ€™m missing something when it comes to Brand Newâ€™s artwork. Is it meant to be deliberately shoddy? I mean, take the cover of ‘Daisyâ€™ (no literally, take it pleaseâ€Â¦) it looks like something some stoned teenager made on Microsoft Publisher. He didnâ€™t have the common courtesy to change the font from Times New Roman (Suddenly imagining this album cover with Comic Sans has cheered me immensely). As for the startled looking fox, it looks like itâ€™s been given a light-bulb enema and the white particles floating around appear to be dandruff. Also, the inlay consists of a folded 6 panel sheet with some ‘artyâ€™ (i.e. blurry) photo of the band and a full page ‘posterâ€™ of some dude in a hat who looks like heâ€™s been caught trying to flush a massive turd. One thing Brand New managed to get right is the CD design, which is a vibrant peach colour, concentric blue circles and the signs of the zodiac around the edge. Anyway, getting off topic here; Brand New are the kind of band that, whilst their artwork deteriorates, their music grows in strength, becoming more intimidating and terrifying, progressing towards a vitriolic embodiment of crushing sounds and sonic noise-scapes, which isnâ€™t bad for a band who used to sing about losing girls to crappy English actors, eh?

This is probably the album that will split opinion among the bands prolific fanbase. It seems a clichÃƒÂ© to say it, but the minimalist, scrappy nature of Brand Newâ€™s presentation, coupled with the stark cruel-edge their music has now evolved into, one can only assume that this is the time they ultimately lose followers, but perhaps gain some new ones. At times, listening to ‘Daisyâ€™ itâ€™s hard to believe that this is the same band who released the pop-punk bounce of ‘Your Favourite Weaponâ€™; an album that bled youthful determination with those now familiar seeds of despondence and malice that stemmed from Jesse Laceyâ€™s (lead vocals) fragile and emotional past. Whilst Lacey had this quite brash anger on ‘YFW’, it always seemed quite childish and playground-esque, whereas subsequent releases have retained a dark, malevolent side, with some quite cutting wordplay and breath-taking instrumentals.

In a move to confuse the listener, opening track ‘Vicesâ€™ features an excerpt from ‘On Life’s Highway,â€™ a gospel hymn written by Bertrand Brown, in all itâ€™s skipping, low-fi production glory. This strange introduction clocks in at just over a minute before cutting suddenly into a pummelling fury of haphazard guitar squeals and precise drum beats. Gone is the soft, melodramatic grind of 2006â€™s ‘The Devil and God Are Raging Inside Meâ€™, which is replaced with the caustic, dense attack of Laceyâ€™s throaty roar of strangled defiance and a guttural drag of tinny, mangled chords. The overlapping nature of Laceyâ€™s feral, bile-spitting voice, coupled with what Iâ€™m assuming is guitarist Vincent Accardiâ€™s quite sombre, yet matter-of-fact vocal technique balance each other out, deviating between rage and tranquillity. ‘Bedâ€™ is perhaps the only track that has any real similarity to the material present from ‘Deja Entenduâ€™ â€â€œ itâ€™s a tender number that follows a solemn moving pattern of layers, which instead of erupting in a fury of noise, circle around one another, trying to take control at different points and conjunctures but never break through. ‘Bedâ€™ seems content to tantalise the listener with itâ€™s closed progression and the beautiful fragility of Laceyâ€™s vocals. Part of me is wondering just how fucking pissed off Accardi was when he penned ‘Gasoline.â€™ Like ‘Vicesâ€™, itâ€™s notable for itâ€™s adrenalin rush of malicious screams courtesy of Lacey, who barks the words like an infuriated canine, straining at itâ€™s chain, eager for the chase and attack. The concentrated sound of ‘Gasolineâ€™ is the backbone of ‘Daisyâ€™ â€â€œ itâ€™s a thick, impenetrable wall of skyscraper-barrage that dips and churns with a grinding, grim determination. Guitars are at times fuzzed out beyond recognition, whilst the precision drumming is so taut; it reaches the Mr Burns level of tightness. Up there as one of the top 5 tracks Brand New have ever recorded.

Lyrically, ‘Daisyâ€™ seems weak compared to clever word-play and pictures conjured up by 2003â€™s ‘Deja Entenduâ€™ and ‘The Devil and Godâ€Â¦.â€™ â€â€œ but what it lacks in words, it completely destroys with guitar, drums and bass. ‘You Stoleâ€™ is a perfect example of this. Whilst initially starting with a gentle lead in, with Laceyâ€™s exquisite voice, crooning a deep sober tone, under a haze of moody atmospheric shifts; it soon fades into this white-noise drenched salvo of progressive hard rock that works on the strength of claustrophobic feedback, reeling drum hits and flamboyantly heavy pitches of dense animosity. ‘Sinkâ€™ follows a similar trend set by ‘You Stoleâ€™ by combining the grit-covered guitar strangle and hoarse screams of emotional rage, that I donâ€™t think have sounded so sincere since the first Glassjaw record. ‘Be Goneâ€™ feels out of place â€â€œ a 91 second intermission track slapped in the middle in an effort to break up the rather intense nature of ‘Daisy.â€™ The heavy drum stomp and Spanish guitar-strumming, coupled with some rather hollow ghostly vocoder-effects, give the impression of a scratched record, desperately trying to spin, whilst the needle bounces in an out of the groove, causing a horrific mess of stuttering stop-start moans and wails. Actually, some mouth-breathing last.fm users have perfectly summed up this track with these ‘hilariousâ€™ tags seen here.

The chorus of ‘Bought a Brideâ€™ is unappealing, in the sense that its leaden, cumbersome nature makes it seem like Laceyâ€™s been singing for several thousand years, and never seems to progress, rising and falling with excruciating sluggishness. This is a shame, as there are some genuninely brilliant moments; such as the thunderous whine of the guitars, which slice and hack away with meticulous energy and cutthroat determination. The title track is yet another grave affair, containing some cleverly woven-in samples, one of which appears to be a concerned child speaking about a person theyâ€™d seen in a dream. Laceyâ€™s vocals are somewhat buried in the almost industrial stomp and the intense bass-driven shudder. Alongside ‘Gasolineâ€™, ‘In A Jarâ€™ is probably the best track on the album; combining deft moments of severe misanthropic wrath, via Laceyâ€™s distorted shout and the grunge-rock onslaught of clattering guitars and scratching shifts of dark resonance.

‘Noroâ€™ closes proceedings, bringing more of the same â€â€œ stark sounding guitar lines and the bone-crushing rhythmic grind of a determined struggle. Itâ€™s also one of the loudest tracks on the album; whether this is a production tweak, who knows, but the guitars cut through the mix with such a teeth-rattling chill and that recognizable warped fuzz that sounds like Lacey and Accardi are playing their six-string with the aerial from a Theremin. It ends as it began with the coda from ‘On Lifeâ€™s Highwayâ€™, abruptly cutting into the wailing vintage vocals.

Despite its soft-sounding name, ‘Daisyâ€™ isnâ€™t a comfortable listen. Itâ€™s probably the most desolate sounding collection of songs Brand New have ever released and almost nothing recognisable exists, (save Laceyâ€™s voice) from their humble beginnings back in 2000. I canâ€™t make up my mind if this is their ‘definitiveâ€™ work, but itâ€™s still an incredibly strong release that shows just how far theyâ€™ve come and a remarkable display of skill with distortion pedals.
–