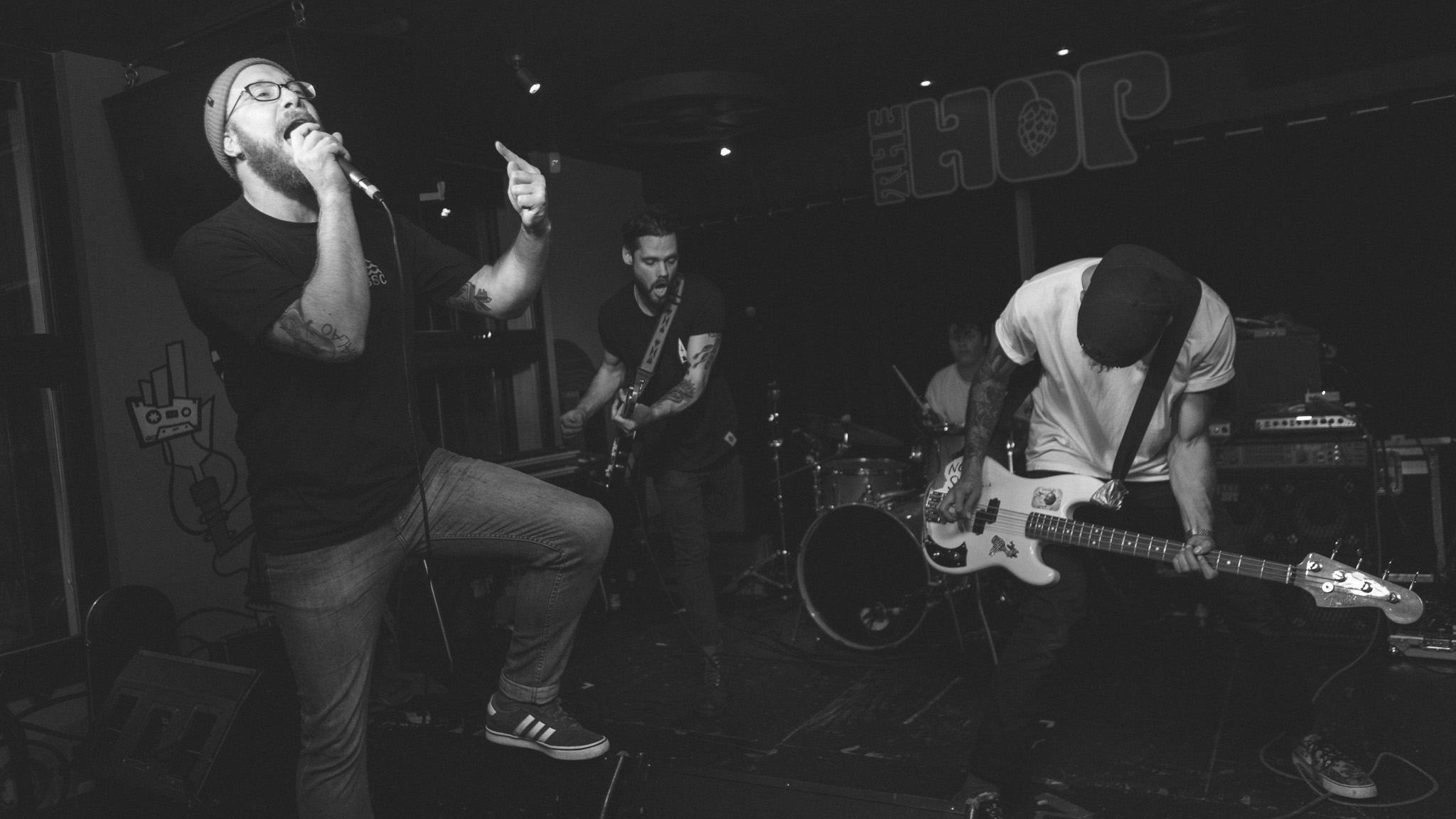 Band – Brawlers
EP – I Am A Worthless Piece Of Shit Pop-punk is everywhere at the moment, with America really cornering the market when it comes to wearing shorts, baggy t-shirts and jumping off of things. The likes of State Champs, The Wonder Years, Knuckle Puck and Basement (to name but a few) are all hammering it home, but we’ve got our own homegrown talent in the form of Neck Deep, Roam, Polar Bear Club and now, all the way from Leeds….Brawlers!

Formed last year from a plethora of bands you may or may not be familiar with (vocalist Harry Johns was in Dinosaur Pile-Up for a bit), as well members from the excellent, yet bonkers Castrovalva, squat-skacore extremists Leftover Crack (yes really) and Martyr Defiled; Brawlers are the raw, beating sound of an early summer. It’s scary how some things enter your consciousness so quickly. After only 2 playthroughs, the superbly titled I Am A Worthless Piece Of Shit has set up a permanent shop inside my head and is proving difficult to budge. Not that you’d want to, because this is fucking brilliant; from the jerking pop-rock of Mothers and Fathers to the anthemic rant-a-thon of the EP title track, this is an absolute blast from start to finish.

Deliriously refreshing; Brawlers are the taste of an ice cold beer on a hot summer day, hugs from someone you love and a high-five from Matt Berry…

“You know it don’t make any sense to me, you’re gonna take your picture” states Johns on the rollicking punk rock fury of Instagram Famous, which bulldozes its way forward, tearing into the pointless nature of a certain online photo-sharing network. Basically, no-one wants to see your dinner of a lager, some boiled eggs and ham on the Internet, so stop fucking doing it. This is a furious and vibrant burst of blistering energy, held together by some superbly concentrated drumming and delirious riffs, as well as Johns superb set of vocal chords.

Heart Attack is a a direct, no-frills assault, mixing the infectious chorus and speed of early Lagwagon, with some nice grunge-rock guitar fuzz and jerking stop-start dynamics. Baudelaire has that slacker-rock feel of Weezer at their most lazy; mixing shrill, discordant guitars, gang-vocals, chants of “I feel bad about it!” (which you’ll be singing back to yourself without even realising it) and a weird swaggering coolness, despite sounding really geeky and joyful at the same time. No Sweat takes a leaf out of the grunge-rock rulebook; it’s disheveled, frustrated and buzzing with a weird mix of pent up energy and wanting to just get wasted and lay down in a park looking up at the stars. It’s got ‘jumping around in the pit drunk off your face on beers and endorphins’ written all over it.

“I am a worthless piece of shit, and you don’t know it and I can’t explain it” admits Johns, quite frankly spilling his guts about how bad he is, on a track that has the chorus that hundreds of other punk rock bands would sacrifice their back catalogues for (it’s seriously that good). Mothers and Fathers latches on to melody and a chorus it knows fans will be shouting from the heavens and doesn’t let go. The cry to “PUT YOUR RECORDS ON!” by Johns, who is obviously in his element, singing on a track that Jimmy Eat World and Waxwing would beg on hands and knees for.

Deliriously refreshing; Brawlers are the taste of an ice cold beer on a hot summer day, hugs from someone you love and a high-five from Matt Berry. As debut EPs go, this is one of the strongest I have ever heard – seriously, the songs on I Am A Worthless Piece Of Shit sound far too mature for a band that’s barely a year old. If you call yourself a punk rock fan you NEED this in your collection – an utterly essential, vibrant and joyful slab of punk rock excellence that will burrow its way into your brain and never leave.

I Am A Worthless Piece Of Shit will be released through Alcopop records on the 5th March.