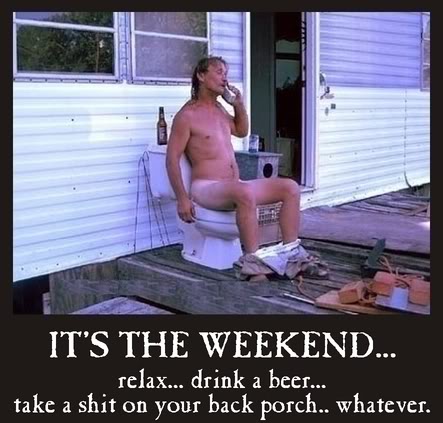 We are still alive. My time has mostly been consumed by going to the pub and I’m starting to think I might have a problem – i.e. I don’t go to the pub often enough because it’s been pretty rad. Oh yeah, happy weekend everyone, here’s a post and a special photo. Remember: looking good is all that matters.

High On Fire are totally ace. Dirty, filth-encrusted metal that combines the right moments of speed and thrash, with that twisted progressive edge and theatrical classic rock fury. Matt Pikeâ€™s chanting of the tracks title is a throaty roar of terror through the booming crash of Des Kenselâ€™s beats and the rumble of Jeff Matzâ€™s bass guitar. The convulsing, thrusting solo that shudders through in the tracks final minute absolutely slays.

I feel sorry for Rob Zombie. He wrote a killer song and then decided to copy that on nearly every album; dipping into more and more extreme horror themes as he went until reaching the point when singing about vomiting sweets was the best course of action. Saying that, this is possibly the best interpretation of said first track and sounds like an anthem that would be played to a motorbike gang as they chain-whip their way through some Hillbilly settlement.

The Unwinding Hours are made up of Craig B and Iain Cook, both ex-members of Scottish oddballs, Aereogramme. Itâ€™s a sparse, delicate effort, with Craigâ€™s vocals dominating over the gentle pluck of the guitar. The fragility of his voice is truly beautiful â€â€œ part drenched in angst, part hopeful of resolution. The build of scratched loops and crumpled programming melds into this voice, like a cacophonic drone engulfing a doomed siren â€â€œ amazing stuff, words canâ€™t do this justice â€â€œ LISTEN.

Nice keyboard intro that morphs into the discordant heavy barrage of abrasive guitars and Rammstein-style marching drums. In factâ€Â¦until the un-German female vocals kicked in, this could have easily covered as a lost b-side for the Buck Dich boys. Think operatic metal in the same vein as that Within Temptation lot and Nightwish and youâ€™re about right; but with that slight industrial edge â€â€œ not overly original, but a terrific voice.

Obviously a somewhat ironic track title, as there is very little peace or indeed any quiet in this. The guitar tone is a scratching, caustic mess of warped, shrill squeals under the shout-sung vocal bark. This is dense and incredibly blunt rock music that bridges the gap between post-hardcore and a wall of feedback.

Crime In Stereo â€â€œ Not Dead

Absolutely brilliant stuff right here. Crime In Stereo are a terrific amalgamation of barbed, spiky hardcore-meets-Brand New-style intensity. Some brilliant vocal interplay between the main singer and the backing vocalist over the serrated riffs and the slight Hot Snakes-meets-Hot Water Music punk rhetoric.

So Many Dynamos â€â€œ New Bones

The best thing about this? The space invader/car alarm/someone mashing a kaos pad with their hand/trippy beats that litter this song, giving it that unconventional and off-kilter sound of someone fucking about in the studio and coming out with something that strangely works. Unfortunately when itâ€™s not doing this, it reaches pedestrian-level indie-wetness with tedious vocals â€â€œ turn the guitars up, lose the vocals then weâ€™ll talk.

These Monsters â€â€œ Call Me Dragon

This is a bit like entering a cave and disturbing something that should have stayed dormant. Whilst mostly instrumental; what vocals that do manage to fight there way through the spiralling twist of bleak prog-noise are jumbled cries of help, whilst the whine of the saxophone is the almighty roar of a beast that is frothing with malicious intent.

Theyâ€™re certainly keen â€â€œ I mean, the eagerness bleeds through this so much, Iâ€™m in danger of being drowned in fresh-faced, soaring alt-rock. Unfortunately, the interchangeable nature of so many bands that sound like Story Of The Year means this doesnâ€™t really do anything for me, except sounding like a track that would probably soundtrack a particularly poignant moment in One Tree Hill or something equally naff.

This should probably come with some kind of health warning â€â€œ you may injure yourself and others from all the vigorous dancing youâ€™re about to engage in. A combination of stoner-ish, fuzzed out bass, a great emphasis on percussion, a rich infectious garage-rock drive of snotty aggression and the slightest element of funk this is one of the best tracks Iâ€™ve heard this year â€â€œ outstanding work Person L.

Straight Lines â€â€œ Versus The Allegiance

Holy shit is that a 12 year old girl singing? Hmmâ€Â¦itâ€™s decent rock in the same vein as Fighting With Wire, but cleaner and tighter â€â€œ brimming with youthful optimism and bounce, which certainly makes a change. Vocals could divide opinion however.

Oh man, what is it, ‘hilarious vocal monthâ€™ in the Rock Sound office or something? First we have the sound of one of the chipmunks covering a Foo Fighters song, now we have someone trying to do an impression of a crow squawking over double-bass pedal, rasping metalcore-meets-spazz rock. Actually, the tormented bird vocals work surprisingly well, obviously showing the influence of early-Poison The Well and seem to have ex-Eden Maine members as well â€â€œ nice, worth investigating this raw, hardcore onslaught.

This is some black metal dude who used to be in Emperor. Stabbing, punk-rock drumbeats litter this composition, that plum the dark recesses of scourged black metal, coupled with the soaring/hoarse vocal combo of dread. The guitar seems to wander at the halfway mark, leaving the drums and bass to continue down the same dark pathway of despair but holds itâ€™s own as a competent piece of progressive metal.

The girl from the exorcist is coming through one speaker, whilst Marlon Brando rasps his way over well played, but dreary noise-metal through the other and ultimately melding together into some weird ritualistic chant, followed by suffocating keyboard whines. I donâ€™t have a clue whatâ€™s going on, because frankly itâ€™s pretty disturbing.