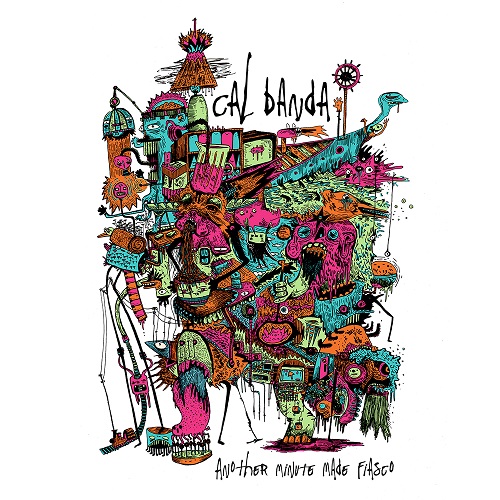 The only way to keep Cal Banda still would be to nail them to the floor. This Birmingham four piece have a collective attention span that can be measured in nano-seconds. Erratically charged, their debut EP, Another Minute Made Fiasco is four tracks of spasmodic fits and starts, rampant battle cries and shredding, nerve-racking disorder.

Opening track, Cut The Kings, glitches and writhes with euphoric and schizofrenic agitation – the math-rock guitar wails and harsh screams slam together in a maelstrom of guttural rage and you can tell Cal Banda are loving the dishevelled and furious noise they’re making. Empires is a mic-swinging blast of snarling, snapping chaos heading down the party-metal route of Every Time I Die and the thrashing caterwaul of Entombed (Wreckage-style).There’s no time to breathe here, you’ve entered the thunderdome and Cal Banda are the ones leaving, not you.

A limb-swinging, house-trashing fervour engulfs Red Plastic Cups which takes a leaf out of Josh Scogin’s big book of “causing absolute and total destruction as quickly as possible”, thundering through just over two minutes of Douglasville-inspired fun-metal straight into your face. Final track, Solid Gold launches forward like some rabid, wild animal. Tappy-math guitar lines spraying everywhere, whilst the Dillinger Escape Plan-acrobatic sound pummels forward with twitching, bile. The last minute or so, Cal Banda throw in some excellent post-rock guitar twiddling, worthy of Gangs-era And So I Watch You From Afar, giving some depth (and respite) to the chaotic attack that’s bulldozed its way in.

Another Minute Made Fiasco is a vibrant, caustic and radiant blast of party-punk-metal that will have you grinning from ear to ear. Purchase below on CD or digital download below!