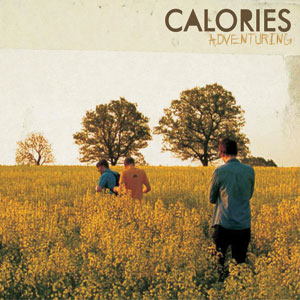 Band – Calories
Album – Adventuring
Label – Smalltown America
Release date – now
Sounds like – remember how infectious the rage virus in 28 Days Later was? Well this will spread through you like that, but in a good way.

Planning any 16 mile trips by car? Well youâ€™ll need some music to listen to. I recommend ‘Adventuringâ€™ by Calories. It perfectly soundtracked a recently journey I had to make, from when I finally managed to pull out of my drive, to dumping my car near a kerb under a tree by a dentists. Google maps says it takes more than the 23 minutes running time of ‘Adventuringâ€™ but what the hell does Google know, eh? It would probably take me on some bullshit long route that involves driving around the whole of the town twice and then getting car-jacked.

Calories feature three ex-members of Distophia, a band I stole lots of badges off once whilst drunk when I saw them support Fickle Public about three and a half years ago. Now, Distophia were fucking awesome, thereâ€™s no denying this: just the right amount of shouty, agitated rock, nice pop sheen with the odd squalling noisy feedback. Perfect. Sadly, problems with releasing their debut ‘Beat Dyslexiaâ€™ and other gubbins led to them calling it a day. Nevermind though, because weâ€™ve got Calories now who also slot into the category involving an expletive in the good sense and the word ‘awesomeâ€™. If you had to pin-point the sound of this Birmingham trio, Hot Snakes would be a good place to start. Their rumbling, bass-heavy punk is akin to that of Froberg, Reis and Co. whereas the vocals have a cleaner, richer edge and express a positive, carefree attitude that bizarrely reminds me of Green-album Weezer. Take ‘Druggedâ€™ with its swaying, twiddly verses that build to the anthemic shout of â€œeverything is beautiful!â€Â which just smacks of summery, raucous punk rock. Calories seem to swing between sounding just about pop enough, before crunching in with the big riffs like me spreading marmite on toast â€â€œ tons of it, in a big coating of thick rhythmic reverberation.

Opening track ‘A Bear a Bisonâ€™ is to me, reminiscent of emo back when it was good and credible, without a trace of wetness. For one thing, it sounds strong, invigorating, not a mopey, depressive run through of tired old cliches. It focuses on a driving, forceful attack that seems to centre predominantly on travelling and progression. Credit to the dual-vocals on the pre-chorus section, which are sublime in capturing the spirit of passionate, alternative rock perfectly.
The jerking, stop-start romp of ‘Caught in the In-Betweenâ€™ is a furious rush of sound that is over all to quickly, but leads nicely into ‘To Encounter A Deerâ€™, which dips into the realms of vigorous, lo-fi pop-rock. Iâ€™m baffled as to why the title track isnâ€™t higher up on the last fm charts, or even blogged as much as ‘A Bear a Bisonâ€™, because itâ€™s definitely the albumâ€™s best track, hands down. Itâ€™s a vibrant, 2 and a half minutes of harmony-filled joy, that pogos between the daunting gates of the pop-punk kingdom and the dirty bass-heavy scuzz of noisy, agitated rock. Itâ€™s also something you end up drunkenly singing along to at the top of your voice after only a few plays; the true sign (in my eyes) of a great song.

‘Oh K.S.S.T.â€™ reminds me of vintage Distophia, particularly the track ‘Starvation Coveâ€™ and yet, it illustrates Calories impatient and boisterous nature, being one of the six tracks on this release that clock in under the 2 minute mark. The fast-spoken vocals on the chorus are yet another nice touch that gives nods towards Andrew Ferris of Jetplane Landing and rival his attempts to fit more words into a piece of music as possible. Tracks like ‘Fragile Numbersâ€™ and ‘Same Idealsâ€™ (absolutely love the rhyming of the song title with the line â€œcurried eelsâ€Â) rush past at a frantic pace, with the latter blending seamlessly into the ‘itâ€™s kind of math-rockâ€™ jaunt of ‘See You On The Expeditionâ€™, which builds at a relentless and hurried gait, before ending far too abruptly. Closing track ‘Forest of Vargâ€™ brings the whole ‘Adventuringâ€™ experience to an end with its spirited, optimistic opening and a hazy, block of â€œaaaaaaaaaaaaaaaaaaaahhhhhâ€Â vocals over a solid closing drum/riff loop that could quite easily go on for double the albums running time and not get boring.

Somehow Calories have tapped into that part of the brain that triggers the part that finds songs so deliciously infective. Through rigorous testing, theyâ€™ve narrowed down 10 tracks that stimulate that area the most and released them as ‘Adventuring.â€™ Is this gushing praise? Yeah probably, but this is such a bloody brilliant collection of songs itâ€™s hard not to get excited about it. This is an absolutely cracking album and a strong and deserved contender for my record of the year come December time.