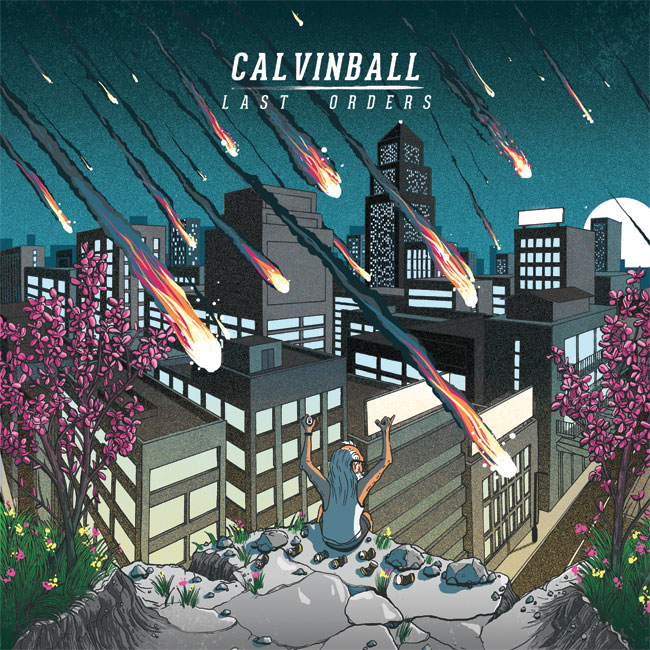 This Sheffield based pop-punk foursome have been lurking in the shadows for years now, producing some good songs on various records and playing lots of gigs in all kinds of dives.

Their philosophy of getting shitfaced and flicking the Vs at the obligations placed on people to behave like grown-ups is one many young men (most importantly me!) can relate to.

The result is a hedonistic sound that has now been perfected with the two vocalists singing and screaming from their throats with the euphoric energy of a defiant stag do at the end of the world.

The production on this albumÂ is a cut above their previous material and well balanced to play to the band’s strengths: good pop-punk riffage, intense accurate drumming and shouty/gravely vocals.

Setting the tone, a feeding back guitar slides around some chords while an American voice babbles (Matt tells me this isÂ Seth Gile from Arms Aloft). The chords sound like ones you’ve heard before but not in a bad way, in a sort of nostalgic way.

To me tracks likeÂ Lost City of AtlantaÂ evoke bitter-sweet memories being skint and besieged in pubs by terrible weather coming off the Irish sea, while still having loyal mates sharing the experience.

Their love of best elements of pop punk and a seasoned ear for a good song shows in tunes on topics as diverse as dramatic moments in Dawson’s Creek (Season 4 episode 20) to the mismanagement of Blackpool Football Club’s by owner Karl Oyston (#Oystonout).

Although there are light-hearted songs like one about chundering in plastic bags (Plastic Bag Vomit Muzzle), there are also gems like ‘no half measures‘ which in the style of Bruce Springsteen/the Gaslight Anthem isÂ heartfelt, and melancholy while steering clear of full on emo self-indulgence.

The final track, brilliantly namedÂ Ron Swansong, uses the riff that introduced the album. An infections rhythm links perfectly with relentless guitars to carry this anthem to conclusion. Finishing on the line ‘so this is it’ we wonder whether this is a statement or a question and I guess that’s up to the listener to decide.

We got hold of bassist/singer Matt Doherty with some questions in hand: How did the name come about?

“Dave’s idea, he’d been into Calvin and Hobbes for years. “Â

The production on this album is a cut above your other recordings. What’s this down to? Better equipment? A more experienced producer?

“Chris at Rec and Play in Sheffield has done pretty much all of our recording since day one. We have no idea what we’re doing in the studio and Chris is really patient with us and is a pretty awesome at polishing turds. He just got a new studio with fancy new equipment so maybe that has something to do with it. “

What do you think of the state of punk music at the moment?

“As far as I can tell it’s pretty good. I’m probably quite out of the loop though. “

What’s the worst dive you’ve ever played in?

“If by “worst” you mean “best”, then the Atari in Leipzig. A fantastic space filled with lovely people and they fed us the most amazing stew I’ve ever had. And we had some weird schnapps stuff.Â

The worst was probably a house in Sheffield that Dave and I lived in. That place was fucked.”

“My favourite was during the summer of ’09, we played with Fashanu, Apologies and Onsind in Chris Lafferty’s house in Newcastle. So hot and sweaty and boozy and fun. Or Fest 10 pre-fest at Wayward Council in Gainesville. It seems the sweatier and boozier a gig, the better.

Either that or the time we tried to use an intro tape for Halloween Fuzz Club in Sheffield and completely botched it and everyone left. That was pretty funny. “

Were there lot’s of songs that didn’t make it onto the album? Any specific examples?

“Not really, we talked about re-recording a couple of older songs that had been on splits but we were just being lazy. Pretty much every little new idea we had we managed to cram onto the album.”

How do you write? I know your Bandcamp says the album was written in 8 days but do you all write together or does someone in particular bring the bones of a song into the studio?

“We all live so far away from each other we basically all try bits of songs and then try and mash them together when we meet up. With Last Orders we already had Atlanta, (which was supposed to come out on a split with Arms Aloft that never happened) then we demoed four instrumental songs about a year ago. We wrote the other songs and pretty much all the lyrics in the 8 days we spent together.”

What music do you think influences you as a band?

“Pop-punk in most of it’s forms. We basically “borrow” from everyone. Name a band and I’ll tell you how we ripped them off.”

What music are you really enjoying at the minute?

“The latest Bangers album, Onsind, Off With Their Heads, Arms Aloft, Morrissey and the Les Mis movie soundtrack.”

What’s the lizard spy conspiracy you sing about in Queen Elizardbirth II, and who’s the “mad bastard”?

“Basically that the ruling elite are nine foot tall shape-shifting reptilian humanoids from a parallel universe intent on enslaving the human race for some reason or other. As for the mad conspiracy bastards, my favourite is Jesse Ventura. He’s been a navy seal, a pro-wrestler, an actor, a governor and now he’s into conspiracies.He got elected to governor ofÂ MinnesotaÂ as an independent candidate with no corporate financial backing,Â  just $50 donations from supporters, which is pretty cool. “

Who’s the guy talking in ‘Hey, So rocket’?

“That would be Seth Gile from Arms Aloft. “

The record has a sound of finality but is this definitely the last we’ll hear of Calvinball?

“We’re doing a short UK tour next year with Arms Aloft then hopefully a final gig either in Manchester or Sheffield. That’s all the plans we have at the moment. As for recordings, who knows? Never say never!

This feels like the climax inÂ the Commitments where after all the shit and wobbles and potential to never even get to the end, this band have ultimately galvanised and produced a record to be really fucking proud of, even if it is the only one there’ll ever be.